Pole vaulter when crossing the bar

Pole vaulting is a discipline in athletics in which the jumpers overcome a high jumping bar with the help of a long, flexible pole after they run up. This bar is 4.50 meters long and placed on two jump stands so that it falls down when touched lightly.

Modern rods are made of carbon fiber reinforced plastic (CFRP), have a diameter of about five centimeters and are hollow. The length and thickness of the stick varies depending on the weight and strength of the jumper and the height of the jump. With rods made of glass fiber reinforced plastic (GRP), the best jumpers reach approx. 6 meters for men (world record: 6.18 m, Armand Duplantis ) and approx. 4.80 meters for women (world record: 5.06 m, Jelena Issinbajewa ).

The pole vault has been an Olympic discipline for men since 1896 and for women since 2000 . Pole vault is also a decathlon discipline .

Pole vaulter in the kick phase shortly before crossing the bar 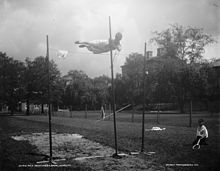 Early forms of "stick jumping" have been handed down by the Greeks in antiquity. Long sticks were used in Crete to swing over bulls. The Celts used sticks for long jumps. High jump events with the stick have been known from the German gymnastics community since around 1775. In the first real pole vault competitions around 1850, long, heavy ash poles were used, on which the athletes climbed more than they jumped.

In 1889, hand movements along the stick were declared illegal in the USA, and at the same time the technique of swinging one's legs forward and belly down over the bar emerged.

Pole vaulting has been an Olympic discipline since 1896 .

Pole vault events for women have been known since 1911, but were not held as official competitions until the 1990s.

There have been several rule changes since 1998: First, touching the staff with the hand was declared illegal. From 2002, the contact area for the ends of the batten was shortened, the cross-section of the batten was changed and the preparation time for an attempt was reduced from two minutes to one minute (in the final phase two minutes for the last three jumpers and five minutes for the winner who has already been determined). They were initiated by Serhiy Bubka in his capacity as a sports official. He himself had achieved his best under the old rules.

Modern pole vaulting technology begins with the use of highly elastic rods made of glass fiber reinforced plastic, which can be bent sharply without being damaged. The degree of deflection can be assessed using the shortest distance between the puncture point and the grip point. Metal bars allow this distance to be shortened when bending by 6 to 20 centimeters, GRP bars by 60 to 100 centimeters.

Roughly, the pole vault can be divided into the movement phases of run-up - puncture-jump - penetration - rolling up - bar crossing - landing. The jumper holds the stick on the opposite side of the take-off leg, e.g. B. right if he jumps off with the left. In the starting position, a left jumper grabs the stick with his right hand at the top from below and with his left hand from about 90 to 120 centimeters away from above; a right jumper reversed. When lifting the stick before starting, the right hand turns with the back of the hand upwards so that the index and middle fingers can press the stick from above and lift it. With the left hand the stick rests on the thumb, the other fingers grip it from above (right jumper: vice versa). The jumper starts the run-up with the end next to the body at hip height, the stick is almost vertical.

The run-up is an uphill run of up to 45 meters or 20 steps, with speeds of up to 9.5 m / s (men) or 8.3 m / s (women) over the last five meters. During the run-up, the bar is continuously lowered so that it reaches a horizontal position on the last three to five steps; the body straightens into a vertical position. The following puncture-jump complex is the central element of the pole vault. During the last three steps, the jumper accelerates the end of the rod upwards, combined with turning movements of the hands, over the head until the back arm is stretched; the tip of the rod "falls" into the puncture box. Before the stick touches the back wall of the puncture box, the forward-upward jump takes place in the form of a quick full-body extension, whereby the jump point must be exactly under the upper hand grip. There are two different techniques here. On the one hand, the jumper can "jump ahead", that is, he takes the full jump without having contact with the back wall of the box, or, as described, he jumps off at the same moment as the stick touches the back wall of the box. Due to the clever use of the starting and jumping energy , the rod bends by itself, with kinetic energy being transferred to the rod. The jumper penetrates the rod, ie it stores energy in the flexing rod.

Before the stick stretches again, i.e. gives its energy back to the jumper, the body must be brought into a stretched head-down position. This rolling up is generated by closing the arm-trunk angle as powerfully and quickly as possible, in which the body comes into an I-position. The jumper holds on to the stick with his right arm stretched and his left arm drawn up (left jumper: vice versa). During the rod extension, the body's center of gravity remains as close as possible to the extension axis of the rod, so that the jumper is catapulted almost vertically into the air. At the end of this movement, the jumper begins to turn around, ie he turns around his body's longitudinal axis with his chest facing the bar in order to be able to cross it safely and pushes himself off the stick. With the right preparation, the crossbar is crossed flying in a curve, the landing takes place with a successful jump on the back.

The bars differ in length and elasticity, which is related to a certain body weight. Sometimes non-metric measurements such as feet for length and pounds for body weight are used in the model names. A stick with the designation 490-77 is 4.90 meters long and designed for 77 kg. In English terms, the same rod would be called 16-170 (16 feet, 170 pounds).

However, there is no assignment to the respective jumper. While z. B. All-around fighters with a jump height of 4.50 meters often jump poles well below their body weight (weight 100 kg - pole 480-84) top athletes take poles well over body weight ( Annika Becker in the German record over 4.77 m: weight 63 kg - pole 460-80). A more precise division of the bars into hardness straight lines enables the comparison of the so-called "flex numbers". This number is determined by the manufacturer as follows: The rod is clamped in two holders at the ends and then loaded with a weight of 22.7 kilograms in the middle. The deflection, measured in centimeters, is then the flex number belonging to the respective rod. In addition, the manufacturers indicate the smallest and largest handle height. The difference between the skipped height and the handle height is called cant.

Which stick a jumper uses is determined by trial and error. He must avoid that the rod bends too much and breaks. Experienced jumpers switch from soft to hard bars (even within a competition).

The starting height and the increases (at least 5 centimeters) for the pole vault will be announced before the competition and each athlete must state his or her entry height. In addition, during the pole vault, the athlete can determine the distance between the stands on which the crossbar lies. The measurement is from the zero line, which is marked by the stop wall of the puncture box, a maximum of 80 centimeters in the direction of the mat. This distance can be changed by the competitor on each attempt. Each athlete is entitled to three attempts per round - i.e. height. However, he does not have to carry out the three attempts above this height. B. after two failed attempts to forego the third attempt, which means that he must perform this third attempt at the next altitude. Above this height he would only have one attempt in this particular case. After three consecutive unsuccessful attempts - regardless of the jump height - he has no right to further jumps. If an athlete renounces one height, he may only try the next one again. If there is only one athlete left in the competition and he has won it, he can determine the further increases in altitude himself.

All jump heights are measured in whole centimeters, whereby the top edge of the bar is decisive. Since the bar sags slightly (a maximum of 3 centimeters is allowed), the center of the bar is measured exactly perpendicular to the floor. For the measurement, the stands have to be pushed to the zero line - this is the only way to ensure a vertical and thus regular measurement.

The following facts are assessed as a failed attempt (the decision on this is made by the umpire for the pole vault):

The playoff is as follows:

The equal competitors make another attempt over the next height after the successfully jumped height. If all of them make it, the bar is raised 5 centimeters, if they all tear, it is lowered 5 centimeters. Until a decision is made, only one attempt is made over each height.

The following example shows the playoff between the two leaders of a competition:

With the IWR 2010, the playoff in the area of ​​the German Athletics Association (DLV) is abolished. It still exists at international level - but only if the competitors want it. Otherwise there are z. B. two "first places".

As the most technically demanding athletic discipline, pole vault is also considered the most dangerous. Typical injuries in pole vaults include dislocations of the shoulder joint and fractures in the shoulder area. The jump puts particularly heavy strain on the patella and Achilles tendons. If the stick is undercut during the jump, there is a risk of injury to the back, and an unprotected fall onto the puncture box can result in serious injuries.

Julia Hütter fell unprotected into the puncture box from a height of 4.50 in 2008 while trying to cross the bar. Hütter tore a cruciate ligament in his left knee as well as a bone splinter in his right ankle.

Annika Becker broke the baton in training in 2004. She landed on the mat so unhappily that her neck buckled and she was on the verge of paralysis. She then ended her career in the pole vault and switched to the long jump.

Kira Grünberg suffered a fracture of the cervical spine on July 30, 2015 during a training jump in Innsbruck . She has been paraplegic ever since .

The current world record for men is 6.18 m and was set by Armand Duplantis from Sweden on February 15, 2020 in Glasgow . Jelena Isinbayeva from Volgograd holds the world record for women with 5.06 m, which she jumped on August 28, 2009 in Zurich .

H: Indoor performance, recognized by the IAAF as equalizing or improving the outdoor world record

K: Climbing technique in which the jumper pulled himself up by grasping the pole several times with both hands

B: Use of a bamboo jumping pole

The 6.15 m jumped in the hall by Serhiy Bubka on February 21, 1993 in Donetsk was not yet considered a world record, since at that time only performances achieved outdoors were included in the record list.

All jumpers over a height of 5.90 meters or higher. A: Altitude was obtained under altitude conditions.

All jumpers with a performance of 4.70 meters or higher. A: Altitude was obtained under altitude conditions. Last change: August 4, 2020