The 6th World Athletics Championships took place from August 1 to 10, 1997 in the Greek capital Athens . The competitions were held in the Olympic Stadium. 2266 athletes from 200 countries took part.

This time there were no changes in the competition offer that counts for the medal table, not even for the women, who were missing a few disciplines in the World Cup program. However, expansions in this sense were gradually continued in the coming events.

For women there were the following deficits compared to the men's competitions.

For the first time at the World Athletics Championships, a new rule for defending champions was applied: they were given a personal right to start. As a result, four participants from the association of the respective defending champion could be eligible to start in the relevant discipline beyond the limit of three starters.

The sixth edition of the World Athletics Championships was also characterized by a high level of performance.

The following seven doping cases occurred at these World Championships: 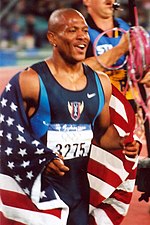 There was a doping case in this competition:
The US American Antonio Pettigrew, who initially came in seventh , confessed to having obtained doping substances from Angel Heredia, a Mexican dealer, from 1997, including erythropoietin , also known as EPO, and growth hormones. As a result, he was stripped of some results, including his seventh place over 400 meters and his victory with the US 4-by-400-meter relay at these world championships. The next win for Haile Gebrselassie, who was dominating in these years
→ Main article : World Athletics Championships 1997 / men's 10,000m

There was also a team ranking in the marathon. Five runners per nation were allowed; the times of the best three were added up for the evaluation. However, the competition was not part of the official medal table.

In this competition, there was a doping case:
The Frenchman Pascal Maran , who resigned in the run, was transferred after his race, with ephedrine to have doped, and was disqualified.

In this competition, there was a doping case:
The American Antonio Pettigrew admitted doping from 1997 funds from Angel Heredia, a Mexican retailer to have related, including erythropoietin , also known as EPO and growth hormones. As a result, he was stripped of some results, including his gold medal in the 4 × 400 m with the US relay.

The competition was overshadowed by a doping case: the Spanish Olympic champion from 1992, Daniel Plaza ,
who initially came tenth , was convicted of doping abuse and disqualified. His explanation belongs in a hit list of the most ridiculous excuses for a positive doping test: he had oral sex with his pregnant wife, who probably produced the steroid naturally as a pregnant woman and passed it on to him.

There was a doping case in the shot put:
The Ukrainian Oleksandr Bahatsch , who was initially proclaimed world champion , was convicted of doping abuse with ephedrine and disqualified.

In the 800-meter race , there was a doping case:
The retired in the semifinals Russian Lyubov Zioma was positive for doping with stanozolol convicted and disqualified.

There was also a team ranking in the marathon. Five runners per nation were allowed, and the times of the best three were added together. However, the competition was not part of the official medal table.

The walking competition was overshadowed by a doping case:
the Russian Olimpiada Iwanowa , initially a silver medalist, was convicted of doping with steroids and was disqualified.

After the jump height of 1.99 m could not be jumped by anyone with the regular three attempts, Hanne Haugland, Olga Kaliturina and Inha Babakowa, who were now tied in the competition up to 1.96 m without failed attempts, went into a jump-off. Hanne Haugland was the only one to jump the 1.99 m again and was thus world champion. Olga Kaliturina and Inha Babakowa took second place together. Julija Lyachowa came after the correctly applied failed attempt rule with also skipped 1.96 m in the thankless fourth place. She had only made the last altitude on the third attempt.

There was one doping case in this competition: Oksana Zelinskaya , a Kazakh who was
eliminated in the qualification, was convicted of having doped with ephedrine after her competition and was disqualified.