Colin Jackson is one of the most successful athletes ever with two world championship titles and four European championship titles in the 110-meter hurdles . His world record of 12.91 s, set in the 1993 World Cup finals in Stuttgart, was set by Liu Xiang in 2004 and undercut in Lausanne in 2006. In 1994 Jackson ran the indoor world record in Sindelfingen with 7.30 seconds in the 60 meter hurdles.

In 1990, 1992, 1993 and 1994 he was first on the annual world best list. In Great Britain, he topped the annual bests list for fifteen years, which no other athlete in any discipline achieved.

Colin Jackson was born in Cardiff, Wales in 1967. His ancestors come from Scotland and Jamaica. At Llanedeyrn High School he played soccer and cricket. He found track and field through his future coach Malcolm Arnold. At first he competed in the decathlon , but soon specialized in the hurdles sprint.

1985 Colin Jackson was second at the Junior European Championships behind his compatriot Jonathan Ridgeon . At the Junior World Championships in 1986 he won the hurdles sprint. At the 1986 Commonwealth Games in Edinburgh, Jackson won silver for Wales in 13.42 s, behind Canadian Mark McKoy (13.31 s).

At the European Indoor Championships in Liévin in 1987, Colin Jackson won silver in 7.63 s behind Arto Bryggare from Finland . 14 days later at the World Indoor Championships in Indianapolis, Jackson finished fourth in 7.68 s. In the summer, Jackson won bronze at the World Championships in Rome in 13.38 s behind world champion Greg Foster from the USA and behind Ridgeon. In 1988 Colin Jackson first took part in the Olympic Games in Seoul . He won silver in 13.28 s, but was three tenths of a second behind US Olympic champion Roger Kingdom .

At the 1990 Commonwealth Games , which were held in Auckland, Jackson won the title for Wales in 13.08 s before the Englishman Tony Jarrett in 13.34 s. At the European Championships in Split in late August in 1990 , Jackson and Jarrett started together for Great Britain. Jackson won in 13.18 s, just ahead of Jarrett in 13.21 s.

In 1991 at the World Championships in Tokyo Jackson won his preliminary run, but injured himself and did not go to the semifinals. The 1992 season was very uneven after an injury-related training deficit, at the Olympic Games in Barcelona he was seventh in the final with 13.47 s, after he had run 13.10 in the run-up. At the World Cup in Havana, Jackson then won with a time of 13.07 s.

As early as the 1993 indoor season it became apparent that Colin Jackson was back in top form. At the World Indoor Championships in Toronto, three runners crossed the finish line almost tied. After the finish photo evaluation, Mark McKoy won in 7.41 s ahead of Jackson in 7.43 s, the American Tony Dees was third in 7.43 s. In the summer of the World Championships in Stuttgart , the hurdle sprint final took place on August 20th. Colin Jackson won ahead of Tony Jarrett and with 12.91 s beat the world record set by Roger Kingdom from 1989 by a hundredth of a second. With the British 4 x 100 meter relay , Colin Jackson and Tony Jarrett won silver behind the US relay along with John Regis and Linford Christie in 37.77s. At the end of the year he was named World Athlete of the Year .

On March 6, 1994 Colin Jackson improved the indoor world record in the 60-meter hurdles in Sindelfingen with 7.30 s. A week later he became European indoor champion in Paris-Bercy. With 7.41 s he had a lead of 16 hundredths of a second over the second-placed Romanian Georg Boroi . Colin Jackson also won the 60-meter run on the flat course in 6.49 s, this double of victory on the flat course and on the hurdles course has not yet been achieved by any other athlete. In August at the European Championships in Helsinki Colin Jackson won the 110-meter hurdles in 13.08 s ahead of the German Florian Schwarthoff and Tony Jarrett. A fortnight later, the 1994 Commonwealth Games took place in Victoria, Canada . Colin Jackson won in 13.08 s, Tony Jarrett came second in 13.22 s. After the season he was voted Europe's Athlete of the Year .

After a year without participation in the championship, Colin Jackson was fourth in 13.19 s at the 1996 Olympic Games in Atlanta, Florian Schwarthoff was third in 13.17 s behind the Americans Allen Johnson and Mark Crear . At the World Indoor Championships in 1997 in Paris, the three medalists were close, the Cuban Anier García won in 7.48 s ahead of Jackson in 7.49 s and Tony Dees in 7.50 s. At the World Championships in Athens in August Jackson also won silver in 13.05 s, Allen Johnson won in 12.93 s.

Jackson did not take part in the 1998 European Indoor Championships or the Commonwealth Games in Kuala Lumpur . At the European Championships in Budapest, however, he won his third title in a row. He set a championship record in 13.02 s and won clearly ahead of the German Falk Balzer in 13.12 s.

The indoor world championships in 1999 took place in Maebashi, Japan. Colin Jackson won his only indoor world title when he won in 7.38 s ahead of the Americans Reggie Torian (7.40 s) and Falk Balzer (7.44 s). In the summer at the World Championships in Seville , Jackson won his second outdoor title in 13.04 s ahead of Anier Garcia, who came second in 13.07 s. In Sydney Colin Jackson took part in the Olympic Games for the fourth time and reached the final in the 110-meter hurdles for the fourth time. He finished fifth in 13.28 s.

After a year without much success, Colin Jackson became European champion in the 60-meter hurdles for the third time at the European Indoor Championships in Vienna in 2002. He won in 7.40 s ahead of the Austrian Elmar Lichtenegger . At the end of July at the Commonwealth Games in Manchester in 2002 , Colin Jackson was second in the 110 meter hurdles in 13.39 s behind the South African Shaun Bownes , who won in 13.34 s. At the European Championships in Munich a fortnight later, Colin Jackson won his fourth title in a row in 13.11 seconds. Second was the Latvian Staņislavs Olijars in 13.22 s.

Jackson retired from the World Indoor Championships in Birmingham in March 2003 after finishing fifth in 7.61s. 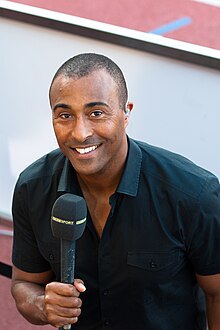 Jackson was President of the British Biathlon Union until the end of 2008 and in this position wanted to give the sport of biathlon in Great Britain more professional structures. Jackson was part of the bid team for the 2012 Summer Olympics in London. He works as a sports commentator and presenter for the BBC . In August 2017, Jackson came out as gay.

Colin Jackson has been the athletic director of the global running event Wings for Life World Run since 2014 .

World champion in the 110 m hurdles

European champion in the 110 m hurdles