Valery Borzov Pylypowytsch ( Ukrainian Валерій Пилипович Борзов , often under the Russian name Валерий Филиппович Борзов and Valery Borzov Filippowitsch * 20th October 1949 in Sambir , Lviv Oblast ) is a former Soviet athlete and one of the best sprinters in the athletics history. From 1998 to 2006 he was a member of the parliament of Ukraine , from 1999 to 2001 for the All-Ukrainian Association "Fatherland", most recently for the United Social Democratic Party of Ukraine . He has been an IOC member since 1994 . 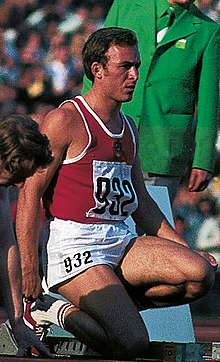 Borsow graduated from the Kyiv State Sports Institute in 1971 and, after distance learning, from the Saratov F. Dzerzhinsky Military College in 1973 . At the Olympic Games in Munich in 1972 he won the gold medal in the men's 100-meter and 200-meter run, as well as the silver medal in the Soviet 4 x 100 meter relay .

From 1969 to 1979 Borsow was an instructor of the Sports Committee of the Ukrainian Soviet Socialist Republic (USSR); at the same time chief instructor and trainer of the inland troops of the Soviet Foreign Ministry for the Moldavian and Ukrainian Soviet Republic in Kiev . In 1976 he started again at the Olympic Games in Montréal and won bronze over 100 meters and with the relay over 4 x 100 meters.

He was also very successful at European Championships: in 1969 in Athens he won the gold medal over 100 meters and the silver medal with the 4 x 100 meter relay. In 1971 in Helsinki he won both over 100 meters and over 200 meters. In 1974 he was again European champion over 100 meters in Rome . In 1978 he competed again despite Achilles tendon problems and came eighth in the 100 meter final.

After operations on both Achilles tendons, he tried to reconnect with the world's elite in 1979, but failed. At the Spartakiad in Moscow in 1979 he ran well behind in the sprint preliminaries over 100 meters and 200 meters and had to realize that his career was over. Borsow was also successful at several European indoor championships over 60 meters. He won in 1970, 1971, 1972, 1974, 1975, 1976, and 1977. He temporarily held the European record for this distance.

From 1979 to 1986 Borsow was in leading positions at the Central Committee of the Ukrainian Komsomol Organization , then, until 1991, he rose to the chair of the State Sports Committee of the USSR. In the years 1991 to 1993 Borsow was Minister for Youth and Sport of the USSR, immediately afterwards (1993-1996) in the then independent Ukraine .

After his tenure as minister Borsov took over from 1996 to 1997 the post of chairman of the State Sports Committee of Ukraine; then he was for a year (until 1998) President of the National Olympic Committee of his country. From 1998 to 2000 he headed the preparatory committee of the Ukrainian Olympic and Paralympic teams and since 2000 he was chairman of the youth policy, sports and tourism committee of the Supreme Council of Ukraine. Borsow has been a member of the United Social Democratic Party of Ukraine since 2001 and moved into parliament in 2003 with the 26th place on the list for his party until it failed to get into parliament again in 2006.

He is married to four-time Olympic gymnastics champion Lyudmila Turishcheva , with whom he has a daughter.

To make it clear what an outstanding athlete Borsow was, one should direct one's attention to his then unique training methods. For example, he was a master of progressive muscle relaxation (after E. Jacobson ). He could consciously tense and relax every single muscle in the leg. The relaxation phase is important for the blood circulation and thus for the optimal supply of the muscles. His trainer Valentin Petrowski , a biology professor, led this strictly scientific training, which included nutrition, exercises for muscle building and endurance performance.

Olympic champion in the 100-meter run

Olympic champion in the 200-meter run

European champion in the 100 meter run

European champion in the 200 m run

President of the National Olympic Committee of Ukraine