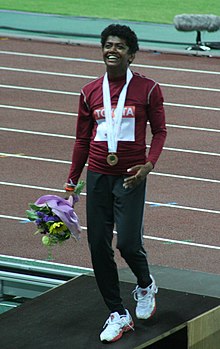 Jayasinghe won her first international medal (silver) at the Asian Games in Hiroshima in 1994 in the 200-meter run . At the 1997 World Championships in Athens, she also achieved the silver medal over this distance. In 1998 she tested positive for nandrolone . At the Olympic Games in Sydney in 2000 Jayasinghe was awarded the silver medal after the original winner Marion Jones was stripped of the gold medal in 2007 for doping.

After the Asian Games in 2002 , where she won the gold medal in the 100-meter run , she withdrew from Asian sporting events because of the lack of support from her own association and emigrated to the USA. At the 2007 World Championships in Osaka, Jayasinghe won the bronze medal in the 200-meter run, and at the 2008 Olympic Games in Beijing, she reached the semifinals at the same distance.

Asian champions in the 100-meter run

Asian champions in the 200-meter run