The 11th World Athletics Championships (officially: 11th IAAF World Championships in Athletics Osaka 2007 ) were held from August 25th to September 2nd, 2007 in the Japanese city ​​of Osaka . The competitions took place in the 50,000-seat Nagai Stadium , where two preliminary round matches and a quarter-final had been played during the 2002 World Cup . 1978 athletes from 200 countries took part.

Osaka was awarded the contract by the Council of the International Athletics Federation (IAAF) on November 15, 2002 after all other cities withdrew their applications.

The opening ceremony took place on August 25 at 5:00 p.m. and the closing ceremony on September 2 at 9:30 p.m. On September 1st, there were two invitation races for wheelchair users over 1500 meters.

Like the World Athletics Championships in Edmonton in 2001 , in Paris in 2003 and in Helsinki in 2005 , these World Championships also suffered significantly from the doping problem due to subsequent examinations and findings. Immediately after the World Championships, there were press reports with reports that these were among other things. U. the first world championships in twenty years without doping findings. But there, too, the skepticism can be felt, which should be confirmed by subsequent results. Six athletes were affected this time, whose placements / medals had to be revoked due to violations of the doping regulations.

In August 2017, a seventh female athlete joined these doping cases:

There were several athletes who could look forward to multiple successes.

The finalists shortly before the start

The 100 meter final ended surprisingly: Despite Gay's good season results, Powell was the clear favorite. Even in the semifinals he was superior; he was clearly wasting time and still stayed at a time under 10 seconds, while Gay achieved a largely evenly running 10 seconds, but nevertheless showed great reserves. Not a few therefore expected a new world record for the final. While Gay only started moderately in the finals and only really came up at the end, Powell was slightly in the lead right from the start and was even able to extend this up to 60 meters. Unexpectedly, however, he lost two to three meters to the rest of the field in the last third of the race and ran upright across the line, clearly disappointed.

The run in Osaka, which was held at temperatures above 30 ° C and a humidity of about 80%, was the slowest world championship marathon ever. Of the 85 athletes who started, only 57 made it to the finish line. Luke Kibet pulled away from his first international championship at kilometer 31 and ran out over a minute before the finish. The Swiss Viktor Röthlin had divided the race well and worked his way up from sixth to bronze in the last two kilometers. Ulrich Steidl ( GER ) finished 37th in 2:30:03 h and suffered a circulatory collapse shortly after reaching the finish line. Marcel Tschopp ( LIE ) finished in 47th place in 2:33:42 h. Martin Beckmann ( GER ) had to retire after 30 kilometers.

In the semifinals, defending champion Bershawn Jackson stumbled at the last hurdle and was eliminated. There was no clear favorite in the final; Clement ultimately won, who was the fastest of all finalists on the flat course. Sánchez, unbeaten from 2001 to 2004, made a big comeback and won silver ahead of Plawgo, who ran national records in the semifinals and in the final.

Despite the early start time, this competition suffered from extreme external conditions and organizational inadequacies (after about an hour there were no more wet sponges to cool off). Several tasks and breakdowns occurred. Of more than 50 participants who started, only 31 reached the finish. Dramatic scenes played out on the track and in the stadium: Several athletes had to be carried out due to dehydration , and the winner also collapsed with a cramp immediately after crossing the finish line.

The only German participant, André Höhne , suffered a serious collapse 200 meters from the finish in the stadium, lying in fourth position, and had to be taken to hospital. Previously, instead of entering the stadium, he had followed a lapped walker 50 meters without being notified of his mistake. As usual, there were numerous disqualifications due to unclean walking: the reigning Olympic champion was taken out of the race 5 kilometers from the finish. The circumstances surrounding the silver medal were also spectacular: Second-placed walker Francisco Javier Fernández, who clearly overtook his Tunisian opponent, who was clearly ahead of him, only shortly before the finish line, was initially disqualified, but received the silver medal back after a successful protest.

Chinese Yu Chaohong dominated the first half of the competition after pulling away from the field with Spaniard Santiago Perez. Ultimately, around the middle of the race, Yu was overtaken by a group of three with Nathan Deakes, Wladimir Kanaikin and Yuki Yamazaki. Yohann Diniz had gone his own pace until then, when he overtook the leading group, Deakes went with him and shortly afterwards pulled away from Diniz.

The Belarusian Andrei Michnewitsch , who came third with 21.27 m, was subsequently disqualified for doping offenses .

Iwan Zichan , the 2003 world champion, who was subsequently deprived of the 2005 world championship title, which was again awarded in 2005, because of doping, and who was also doped in 2006, was out of the medal ranks for a long time in the final. With his sixth and last attempt, he secured the gold medal and relegated his competitor Primož Kozmus to second place. Third place was no less contested: Libor Charfreitag won bronze after just surpassing the distance of the 2005 vice world champion, Wadsim Dzewjatouski, with his sixth litter.

The finish was very close: three runners were almost tied. After the race, it took several minutes to determine the exact placement of the runners. First Williams, then Edwards and finally, after a detailed evaluation of the target photo, Veronica Campbell was declared the winner. For them it was the first world championship title after two Olympic gold medals in Athens in 2004 . 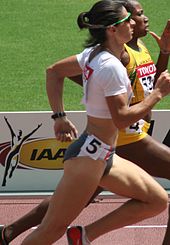 Novlene Williams and Ana Guevara during the first heat

The Kenyan was leading from the start and started the race with a lap of 56.16 seconds. On the second lap, Mutola in particular tried to keep the gap small, but was attacked by Benhassi in the target corner. Mutola fell exhausted on the home stretch. Martínez and Benhassi didn't keep up with the pace on the first lap and in the end they sprinted over the entire field except for the Kenyan, who achieved an undisputed start-to-finish victory.

The Turkish Elvan Abeylegesse , who was initially fifth , was subsequently convicted of doping and banned for two years. Her results at these world championships - apart from fifth place here over 5000 meters and silver over 10,000 meters - were canceled.

This competition did not go as expected: Although Tirunesh Dibaba won a favorite, the triple success aimed at by the Ethiopians did not materialize. Dibaba's older sister Ejegayehu fell and therefore lost some places, her compatriot Mestawet Tufa got out with circulatory problems.

In this race, the Turkish Elvan Abeylegesse first won the silver medal, which, like her fifth place over 5000 meters, was deprived of her after she was subsequently convicted of doping and banned for two years.

Just like the men's competition, the women's competition took place under extreme weather conditions. With temperatures around 30 ° C, it took a long time before preliminary decisions were made. At kilometer 20, 28 runners were still tied at the top. Only at kilometer 35 did the eight participants who were also ahead at the end clear away. The decision about the medal ranks was made in the last two kilometers, when Catherine Ndereba pulled away and defended a narrow lead to the finish. Reiko Tosa, cheered on by the spectators, was able to intercept Zhu Xiaolin, who was in third place, one kilometer from the finish and almost worked his way up to second-placed Zhou Chunxiu.

Melanie Kraus ( GER ) divided the race well. Still in 35th place at kilometer 25, she finished 20th in the end. The second German runner Susanne Hahn , who came in 43rd , had more problems . Kerstin Metzler-Mennenga ( LIE ), who, as it later turned out, had qualified through sports fraud, came in 53rd place. Out of 66 runners who started, 57 reached the finish.

Never before has there been only two tenths of a second between the first and eighth runner in hurdles sprints at world championships. The 2005 world champion won it ahead of the 2003 world champion. The European champion Kallur did not even have a personal best to win the bronze medal.

Scene from the 3rd run of the 3000 m obstacle course

It came to the expected victory of the favored US season. Nevertheless, it got tight again at the finish line, as Campell came up strongly and Edwards only ran the last few meters. The German season remained within its possibilities with good changes after it was temporarily disqualified due to an alleged change error in the run-up.

Isinbayeva jumped over 4.65 m on her first attempt, she overcame her second height of 4.80 m in the second attempt and was thus world champion. She then tried her hand at the world record height of 5.02 m three times, but could not master this height.

Lebedewa jumped her winning distance on the second try and repeated the distance on the third try. Gomes was in second place until the last attempt, but was then surpassed by the other two Russians. Kotowa had won silver at the last three world championships and has now won bronze.

There were two athletes who were subsequently disqualified for positive doping tests: the Greek Chrysopigi Devetzi , who came third with 15.04 m, and the Russian Anna Pjatych , initially fourth with 14.88 m.

In the last attempt, Valerie Vili exceeded the previous best performance by Nadseja Astaptschuk (20.04 m), who narrowly missed the gold medal with her last shot with 20.48 m.

Franka Dietzsch achieved her victory distance in the first litter. The Russian Darja Pishchalnikova , who came second with 65.78 m, was subsequently disqualified for manipulating doping tests.

Betty Heidler took the lead in the second attempt. Wenxiu Zhang and Yipsi Moreno almost came close to Heidler's width, but in the end the German won. Moreno has already won her fourth world championship medal.

Carolina Klüft won the world title for the third time in a row, won her 18th competition in a row and set a European record.

The German line-up comprised 60 athletes who competed in 20 disciplines:

The Austrian line-up consisted of three athletes who started in two disciplines:

Mention of the placement if the final has been reached: