Allyson Felix (born November 18, 1985 in Los Angeles , California ) is an American sprinter . With 12 world championship titles, she is the most successful participant in the world championships in athletics and has the largest medal haul of an athlete at the Summer Olympics with six gold and three silver medals.

Born to Paul, a pastor, and Marlean, a schoolteacher, Allyson Felix grew up in California. Her older brother Wes Felix was also a sprinter and later became her manager. Felix is ​​a staunch Christian and says that her talent is “a gift from God”. Allyson Felix attended Los Angeles Baptist High School and turned to athletics in ninth grade .

In 2001 she won the gold medal at the World Youth Championships over the 100-meter course in 11.57 s. In 2003, she was selected by the magazine Track & Field News for High School Athlete of the Year chosen. In the same year she ran 22.11 s over the 200-meter distance in Mexico, which would have meant a new youth world record in terms of time, but the run was not recognized as such by the IAAF because the meeting organizer had not carried out any doping controls. With her high school degree under her belt, she signed a professional contract with Adidas when she was 18 .

At the 2004 Olympic Games in Athens, Felix won the silver medal in the 200-meter run (22.18 s) behind Veronica Campbell (JAM) and in front of Debbie Ferguson (BAH). With her 22.18 seconds, she set a junior world record there for the 200-meter course (valid record; status: March 2019). After that, she separated from her coach Pat Connolly after a season . In November, Bob Kersee , Jackie Joyner-Kersee's husband and former trainer of world record holder Florence Griffith-Joyner , became her new trainer.

At the World Championships in Helsinki in 2005 , she was world champion in the 200-meter run in 22.16 s ahead of Rachelle Boone-Smith (USA) and Christine Arron (FRA). This made her the youngest sprinter to ever win gold at world championships. 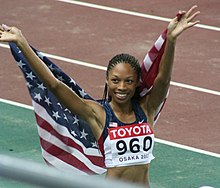 At the 2007 World Championships in Osaka, Allyson Felix defended her world title over the 200 meters with a new personal best of 21.81 seconds. Just one day later, she also won gold in the 4 x 100 meter relay. On the final day of the competitions, she also achieved gold with the 4 x 400 meter relay, which made her the second athlete after Marita Koch , who won three world championship titles.

At the Olympic Games in Beijing in 2008 Felix again won the silver medal in the 200-meter run (21.93 s), again behind Veronica Campbell-Brown (JAM) and ahead of Kerron Stewart (JAM), as well as Olympic gold with the 4 times -400 meter relay. Over 100 meters, she had missed qualifying with a fifth place at the national championships, although she was under eleven seconds for the first time in May with 10.93 s.

At the 2009 World Championships in Berlin, Felix again won the 200 meters (22.02 s) ahead of Veronica Campbell-Brown and Debbie Ferguson-McKenzie. She is the first athlete to win three world championships on the same sprint route. On the final day of the competitions, she also won the gold medal with the 4 x 400 meter relay. In both the 200 and 400 meters, she had remained under the “magic” marks of 22 and 50 seconds with her season bests over the past three years.

In 2010, a year without a clear climax, as it was free of the Olympics and World Cup, she also concentrated on the 400-meter distance for the first time. Over the course of the season she won the overall standings over 200 and 400 meters in the Diamond League meeting series, which was held for the first time, and remained unbeaten in 21 of 22 races, albeit without improving her best performances.

At the 2011 World Championships in Daegu , South Korea , Felix was the most successful athlete, although she only took silver in the 400-meter run despite her personal best of 49.59 s behind Amantle Montsho and had to be content with a bronze medal over 200 meters. However, she won gold with both the 4 x 100 and the 4 x 400 meter relay of the USA. 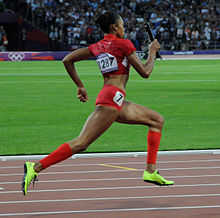 In 2012, Felix had to decide whether she wanted to compete in the Olympic Games over 100 or 400 meters in addition to the 200-meter distance. She opted for the shorter sprint route and was finally able to qualify for the Olympics, having previously taken third place in the eliminations at the same time as Jeneba Tarmoh ; a scheduled decision race canceled this, which means that Felix was selected by the US federation for the Olympic team. A new personal best, however, fell over 200 meters. With the fourth fastest ever run time of 21.69 s she won ahead of Carmelita Jeter and Sanya Richards-Ross .

On August 8, 2012, Felix won the 200-meter run at the 2012 Olympic Games in front of Shelly-Ann Fraser-Pryce and Carmelita Jeter. It was her first individual gold medal at the Olympics. Before that, despite her personal best of 10.89 s, she was only fifth in the 100 meter final . In the final of the 4 x 100 meter relay, she and her teammates won gold in a new world record time. This had previously existed for over 26 years. Together with Tianna Madison , Bianca Knight and Carmelita Jeter, she beat the old record by more than half a second in 40.82 seconds. One day later, she won her third gold in the 4 x 400 meter relay at the Olympic Games in London, making herself the most successful female athlete in these games.

On May 25, 2013, at the Great City Games in Manchester , she improved the world record over 150 meters from 16.50 s to 16.36 s. Arrived as the favorite and fastest in the semifinals, she could not finish the 200-meter final at the World Championships in Moscow due to a thigh injury.

After a break of nine months, Felix made her comeback in Doha in May 2014 . She won over 200 meters with a victory at the Brussels Meeting in a world best of 22.02 s for the second time since 2010 in the Diamond Race .

At the 2015 World Championships in Beijing , she won gold over 400 meters and silver with the two US relays.

In April 2016, Felix injured his right ankle during training, which forced her to take a three-month break from competition. With the aim of getting the 200 and 400 meter doubles at the Olympic Games, she made her comeback at the Olympic Trials in early July to qualify in both disciplines. At the same time, she stated that she was not fully fit again and had only run clockwise during training to protect her injured ankle. With 49.68 s she won the 400-meter run, but over 200 meters she surprisingly missed the Olympic qualification in fourth place, with Jenna Prandini crossing the finish line a hundredth of a second ahead of her.

At the Olympic Games in Rio de Janeiro 2016, Felix was the most successful athlete with two gold medals and one silver medal, together with the Jamaican sprinter Elaine Thompson . In the 400-meter run, Felix was narrowly beaten by Shaunae Miller , who saved herself with a jump in front of Felix, who was catching up in the last meters, over the finish line. In the semi-finals of the 4 x 100 meter relay, the US team lost the baton when Felix was hindered by the Brazilian Franciela Krasucki , who was running on the branch line , when he was handed over to English Gardner . After the US successfully filed a complaint, this created a curiosity in the history of the Olympic Games. In an additional race, the US relay started alone and had to qualify over time, running a faster time with 41.77 s than the two preliminary winners Jamaica (41.79 s) and Germany (42.18 s) and won later in the final with 41.01 seconds, the second fastest season ever run up to then. As the final runner in the 4 x 400 meter relay, Felix finally won her second gold medal in Rio and her sixth Olympic gold medal overall. This makes her not only the most successful athlete at the Rio Games, but also the most successful athlete of all Olympic Games to date with six gold and three silver medals.

In July 2017, Felix ran the 400 m in a Diamond League race in London in 49.65 s, setting a new world record for the year. A month later at the 2017 World Athletics Championships , which also took place in London, she could not quite live up to her role as favorite and won the 400 m in 50.08 s behind Phyllis Francis (49.92 s) and Salwa Eid Naser (50.06 s) only the bronze medal. In the two relay competitions she then won gold twice and set two world best times with her teams with 41.82 seconds and 3: 19.02 minutes. With eleven gold, three silver and two bronze medals, Felix is ​​the most successful participant in athletics world championships, ahead of Usain Bolt (eleven gold, two silver, one bronze).

Allyson Felix is ​​known for her "elegant" running style, which has brought her to a comparison with a gazelle and with Wilma Rudolph .

Although it is not above average with a height of 1.68 m, its spacious step is particularly noticeable. Their average stride length (2.17 m, measured in the 100-meter run of the US Championships in 2007; 2.38 m on the 100-meter home straight of the 200-meter run of the 2012 Olympic Games) corresponds to the average of male top sprinters and is around 20 centimeters longer than that of its competitors. In return, their step frequency is correspondingly lower and is only just over four steps per second. She herself said of her running style that to people who see her running it looked like she was floating, but not running fast.

Another special feature is the collaboration with the sporting goods manufacturer Nike to develop an innovative running shoe with a 3D printer . After more than two years of development, Allyson Felix started at the 2016 Olympic Games in Rio de Janeiro with the “Nike Zoom Superfly Flyknit” running shoe , which was adapted to your physical requirements using a 3D printer.

Olympic champions in the 200-meter run

World champions in the 200-meter run

World champions in the 400-meter run