Heide Ecker-Rosendahl (actually Heidemarie Ecker-Rosendahl, née Rosendahl; born February 14, 1947 in Hückeswagen ) is a former German athlete who competed for the FRG. The former world record holder in long jump and pentathlon won two gold medals and one silver medal at the 1972 Olympic Games. Rosendahl, who grew up in Radevormwald , was also elected Sportswoman of the Year in 1970 and 1972 . Her athletic specialty disciplines were long jump , sprint and pentathlon . With a height of 1.74 m, she had a competition weight of 64 kg.

Heide Rosendahl grew up in Radevormwald as the daughter of the discus thrower Heinz Rosendahl . In 1963 she made a name for herself for the first time: the 16-year-old jumped an amazing six meters and won the German Youth Championships in long jump and pentathlon. In 1965, the 18-year-old began studying sports science for teaching in Cologne . She became a member of Gerd Osenberg's training group at TuS 04 Leverkusen . It was the beginning of the women's athletics group, which later became legendary, from which well-known athletes such as Liesel Westermann , Ellen Wellmann-Wessinghage , Ulrike Meyfarth and Heike Henkel came from.

The collaboration already bore fruit in the following year: the versatile Rosendahl won the silver medal in the pentathlon at the European Championships in Budapest and became known to a wider public for the first time. The 1968 Olympic Games in Mexico City , however, were a disappointment for the 21-year-old. In the long jump, "Miss Athletics", as she was called by a well-known tabloid, only reached eighth place. A muscle injury also prevented the start in the pentathlon, in which she would have competed as the world's best and top favorite - u. a. she had clearly defeated Ingrid Becker , who then became Olympic champion, in the season shortly before .

In 1969 Rosendahl achieved a new world record in pentathlon with 5155 points. Her international breakthrough and ascent into the absolute world class came a year later. As part of the Universiade , the world championship for students, the German won the long jump in 1970 with a world record distance of 6.84 m. She also won this discipline this year at the European Cup in Edinburgh with 6.84 m in front of the British Ann Wilson (6.57 m). In 1971 Rosendahl became European champion in the pentathlon and third in the long jump.

The climax of her extraordinary career, which made Rosendahl the most popular athlete in West Germany , she experienced at the 1972 Olympic Games in Munich : Heide Rosendahl won the long jump with 6.78 m and after six days won the first gold medal for the athletics team of the Federal Republic of Germany . She relegated Bulgarian Diana Jorgowa by just under an inch to second place. Two days later she also won the silver medal in the pentathlon when she lost ten points to the British Mary Peters . A further eight days later, Heide Rosendahl finally became the “face of the games” in Munich: As the final runner in the 4 x 100 meter relay , she managed to defend the West German quartet's minimal lead against the favored relay from the GDR . This had set a new European record in advance. Opponent as Rosendahl's final runner on the East German side was none other than the world record holder and newly crowned Olympic champion over 100 meters, Renate Stecher . Together with Christiane Krause , Ingrid Mickler and Annegret Richter , Heide Rosendahl also set a new world record with 42.81 seconds. 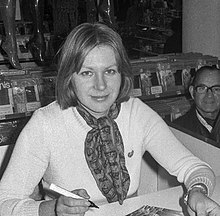 Heide Rosendahl ended her career in 1973. Since 1974 she has been married to John Ecker , a former basketball player from TuS 04 Leverkusen . Their son David Ecker was born in Los Angeles in 1975 ; her son Danny Ecker , born in 1977, was one of the best German pole vaulters when he was active .

In 1970 and 1972 she was named Sportswoman of the Year . Also in 1972 she received the Golden Bravo Otto from the youth magazine BRAVO. From 1976 to 1990 she was a trainer in the athletics department of TSV Bayer 04 Leverkusen . The double Olympic champion also lit the Universiade flame in Duisburg in 1989 . From 1993 to 2001 she was a member of the Presidium of the German Athletics Association , four years of which as Vice President (1997 to 2001), and its athletes representative. Since 2002 she has been the deputy chairwoman of the athletics department of TSV Bayer 04 Leverkusen.

Heide Ecker-Rosendahl is also deputy chairwoman of the North Rhine-Westphalian Foundation for the Promotion of Young Talent in Competitive Sports (in short: Sportstiftung NRW ) in Cologne.

Heide Ecker-Rosendahl is a qualified sports teacher (sports studies in Cologne , diploma 1969). She now lives in Leverkusen , was the managing director of a nutritional science company until 2011 and ran several sports studios.

In 2008 she was awarded the Federal Cross of Merit, First Class. She is also the bearer of the silver bay leaf .

In 2011 he was inducted into the Hall of Fame of German Sports .

Both athletes had a dropout - Heide Rosendahl in the high jump, Mary Peters in the long jump. In the end, it was Rosendahl's inferiority in the shot put that made the difference.

*) Your world record of 5155 points set in 1969 can no longer be compared with later results due to subsequent rule changes.

Germany's sportswoman of the year