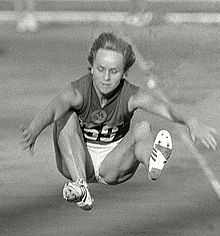 When the Soviet team first appeared at the 1952 Olympic Games in Helsinki , 19-year-old Vera Kalashnikova was there. In the 100-meter run she made it to the semifinals, in the 4 x 100-meter relay she was fourth in 46.3 seconds in the final with the Soviet team.

At the 1954 European Championships in Bern , the Soviet relay with the line-up Krepkina, Rimma Ultikina , Marija Itkina and Irina Turowa was European champion in 45.8 seconds ahead of the quartet from the Federal Republic of Germany.

At the Olympic Games in Melbourne in 1956 Krepkina repeated their result from 1952. She was eliminated in the 100-meter run in the semifinals and was fourth in the relay, this time in 45.6 seconds.

The 1958 European Championships in Stockholm was the only international championship where Krepkina could win an individual medal in the sprint. In 11.7 seconds, she finished second in the 100-meter run at the same time as the British winner Heather Young . The Soviet relay with the line-up Krepkina, Linda Kepp , Nonna Polyakowa and Walentyna Maslowska won in 45.3 seconds with seven tenths of a second ahead of the British, although Heather Young was missing due to injury.

Also at the Olympic Games in Rome in 1960 , Krepkina was eliminated in the semi-finals of the 100-meter run and was fourth in the relay in 45.2 seconds. However, between these two competitions she still took part in the long jump. Shortly before the Games, Hildrun Claus from the GDR replaced the 1956 Olympic champion Elżbieta Krzesińska from Poland as the world record holder with a height of 6.40 m . To everyone's amazement, Claus finished third with 6.21 m behind Krzesińska with 6.27 m. Krepkina won 6.37 m in the fourth attempt and improved Krzesińska's Olympic record by two centimeters.

Wera Krepkina is 1.59 m tall and weighed 58 kg during her active time.