Heike Gabriela Drechsler ( née Daute , married Drechsler-Bryggare ; born December 16, 1964 in Gera ) is a former German athlete who became Olympic champion in the long jump in 1992 and 2000 .

In 1974 she started athletics at the BSG Wismut Gera training center and moved to SC Motor Jena in 1977 . In 1983 in Helsinki she was the first world champion in the long jump . The then 18-year-old became the youngest long jump world champion to date and a celebrated athlete in the GDR . From 1986 to 1998 she won the gold medal in the long jump every time at the European Championships . 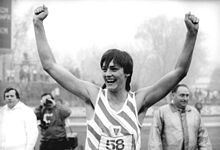 Heike Daute at a sports festival in Jena, 1984

At the Olympic Games in 1992 she was the first long jump Olympic champion, and the following year she won gold again at the World Championships in Stuttgart . She won her second Olympic gold in Sydney in 2000 .

In 1986 she was GDR Sportswoman of the Year and 2000 Sportswoman of the Year in Germany. The Polish press agency PAP selected her as Europe's Sportswoman of the Year in 1986, and she received the same title from the Union of European Sports Journalists (UEPS). In 1998 she was awarded the Bambi . Numerous websites claim that Heike Drechsler was voted athlete of the century in 1999 ; However, this is not entirely correct: although she was shortlisted, Fanny Blankers-Koen was chosen . She was named World Athlete of the Century by the readers and experts of the national specialist magazine Leichtathletik and voted Long Jumper of the Century by the renowned Track & Field magazine .

Heike Drechsler's original goal was to end her career by participating in the 2004 Olympic Games in Athens, but after problems with her form in qualifying, she withdrew her participation. On September 12, 2004, she competed for the last time at the ISTAF in Berlin and was bid farewell to active sport in front of over 60,000 spectators. The solemn end of her career was celebrated in Gera on May 6, 2005 . She was made an honorary citizen of the city. She is currently a sports expert in athletics for the sports broadcaster Eurosport . During the 2005 World Championships in Helsinki, Heike Drechsler was honored with a fair play prize.

In 2014 she was the first German athlete to be accepted into the IAAF Hall of Fame alongside Marita Koch .

Heike Drechsler was born as Heike Gabriela Daute and grew up with three siblings. Her father had a fatal accident in 1974. After graduating from high school, she completed an apprenticeship as a precision mechanic (optics) and studied education .

In 1986, like other top athletes, she became an FDJ member of the People's Chamber . She belonged to the GDR parliament until 1990 .

For several decades after the intervention of the Stasi records authority, Heike Drechsler was alleged to have worked as an unofficial employee ( IM Jump ) for the Ministry for State Security (MfS) for several decades . This claim was refuted in October 2018 in a report by political scientist Helmut Müller-Enbergs commissioned by her . In fact, according to the MfS's report, it was recorded as a VIM (preliminary IM), i.e. as a potential IM.

In 1984 she married Andreas Drechsler, who was then a sports student and substitute football goalkeeper for FC Carl Zeiss Jena . After the divorce, Heike Drechsler was granted custody of her son, born in 1989, in 1997. From 1995 to 2007 she was in a relationship with the former French decathlete Alain Blondel (* 1962).

The name "Spix", which she herself gives as her birth name, comes from a couple from Aachen with whom she has been known since the end of the GDR . Heike Drechsler was adopted by them in 1999.

In February 2016 Drechsler took part in the show Ewige Helden on the TV channel VOX with other former world-class athletes . At the end of February 2016, she had an episode role on In allerfreund - The young doctors .

Heike Drechsler lives in Berlin. She works at the Barmer Ersatzkasse in company health management and gives lectures on prevention, motivation and life-work balance. Heike Drechsler has been the ambassador of the German Rheumatism League since November 2016.

From April 2017 Drechsler completed a referee course. At the European Athletics Championships in Berlin in 2018 , she was used as a referee.

In January 2019, Drechsler married the former Finnish hurdler Arto Bryggare , with whom she got together in 2016, and took the name Drechsler-Bryggare .

Doping in the GDR

In 1991, anti-doping opponents Brigitte Berendonk and Werner Franke were able to secure several dissertations and post-doctoral theses by former GDR doping researchers at the Bad Saarow Military Medical Academy (MMA). Based on the work, the state-organized doping practice of many well-known GDR competitive athletes, including Heike Drechsler, was reconstructed. According to the information, Heike Drechsler received high doses of Oral-Turinabol plus several testosterone ester injections from 1982 to 1984 as part of bridging doping before competitions. Drechsler lost a lawsuit against Brigitte Berendonk, who accused her of lying, in 1993. In the Drechsler case, there are still complete annual dosage plans and diagrams for the development of competition performance depending on the dosage level.

Appearances in film and television

European champions in the 200-meter run

Sportswoman of the year in the GDR

Germany's sportswoman of the year