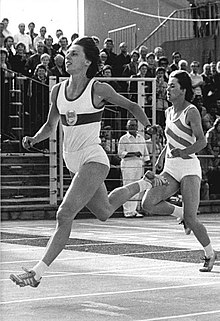 After Marita Koch was unable to participate in the 1976 Olympic Games due to an injury (muscle tear), the 1980 Olympic Games in Moscow became her only games. With the victory over 400 meters and together with the GDR relay over 4 x 400 meters, she won two medals. She won the 400 meters in 48.88 s. In the season she won silver as the final runner together with Gabriele Löwe , Barbara Krug and Christina Lathan .

At the 1984 Olympics she was unable to attend because of the boycott of the socialist states. For the 1988 Olympic Games in Seoul , however, it was firmly planned again. But shortly before that, she retired from active sports. She stated that her tendons were hurting too much and that she did not believe in "being able to do it again."

With the world championships in 1983 , Marita Koch only experienced one world championship appearance . With three gold medals and one silver medal, she was also the most successful athlete. In the title fights in Helsinki she won over 200 meters (22.13 s), 4 times 100 and 4 times 400 meters. She took silver over 100 meters . Her compatriot Marlies Göhr reached the destination five hundredths of a second before her.

However, Marita Koch collected most of the medals at European championships . In total, she was European champion six times. From 1978 to 1986 she won the gold medal over 400 meters three times in a row. With the GDR relay, Marita Koch also won the gold medal there. At the European Championships in 1982 she also set new world records both over 400 meters (48.16 s) and with the relay (3: 19.04 min). She was able to beat both records again.

Marita Koch managed to become GDR champion 19 times between 1975 and 1986, winning ten titles indoors and nine outdoors. She won her last title at the indoor championships in 1986.

With a height of 1.71 m, Koch had a competition weight of 61 kg. Her trainer at SC Empor Rostock was Wolfgang Meier, with whom she has also been married since 1987 and has a daughter (* 1989). Koch studied medicine at the Wilhelm Pieck University . In 1989 she broke off her studies and opened a sporting goods store in Rostock, and from 2000 she also ran a fashion store.

In 2014 she was the first German athlete to be accepted into the IAAF Hall of Fame alongside Heike Drechsler .

She set seven world records on her parade route, the 400 meters. The 47.60 s of 1985, when she clearly defeated all the competition except for the Russian Olha Wladykina-Bryshina (48.27 s) at the World Cup in Canberra , have not been beaten to this day. Apart from Koch, only the Czech Jarmila Kratochvílová (47.99 s on August 10, 1983) managed a run under 48 seconds. However, Marita Koch set her first world record over the 200 meters, a month before her first world record over 400 meters. At the age of 21 (1978) she ran half the lap in Erfurt's Steigerwald Stadium in 22.06 seconds. A year later, it finally pushed the mark to 21.71 s, which was a European record until August 28, 2015, when Dafne Schippers undercut it at the 2015 World Athletics Championships in Beijing . In 1984 she confirmed this time again.

Marita Koch set two further world records in non-Olympic disciplines, namely in the 4 x 200 meter relay and over the 50 meters in the hall.

Marita Koch at a sports festival in the Berlin Sports Forum, August 21, 1986

In 1991, anti-doping opponents Brigitte Berendonk and Werner Franke were able to secure several dissertations and post-doctoral theses by former GDR doping researchers at the Bad Saarow Military Medical Academy . Based on the work, the state-organized doping practice of many well-known GDR competitive athletes, including Marita Koch, was reconstructed. According to the information, Marita Koch received high doses of Oral-Turinabol from 1981 to 1984 . Marita Koch denies having used doping substances.

Olympic champions in the 400-meter run

World champions in the 200-meter run

European champions in the 400-meter run

Sportswoman of the year in the GDR