Elaine Thompson grew up in Banana Ground, Manchester Parish . She attended Gargolie Primary School , Christiana High School, and Manchester High School . She has been studying at the University of Technology (UTech) in Kingston since 2013 . Under the training of Paul Francis at UTech and his brother Stephen Francis from the renowned MVP Track & Field Club , Thompson continuously developed her services. She gained her first international experience at the Central American and Caribbean Championships in 2013 in Morelia, Mexico. As a starting runner, she led the Jamaican 4 x 100 meter relay to the gold medal. At the Commonwealth Games 2014 in Glasgow, Jamaica also won the relay competition, but Thompson was only used here in the run-up and was replaced in the final by Schillonie Calvert .

Rise to the top of the world

In the 2015 season, Thompson made his breakthrough to the top of the world. At the UTech Classic in April, it stayed below the 11-second mark for the first time at 10.92 s. At the end of May it improved to 10.84 s at the Prefontaine Classic in Eugene. On the advice of her trainer Stephen Francis, however, she decided not to start over 100 meters at the Jamaican Championships at the end of June, but only competed in the 200-meter run . She won in 22.51 seconds ahead of Sherone Simpson and Veronica Campbell-Brown and qualified for the World Championships in Beijing . At the London Grand Prix at the end of July, she increased her personal best over 200 meters to 22.10 seconds. At the World Championships she improved to 21.66 s and won the silver medal behind the Dutch Dafne Schippers . She also won the title in the 4 x 100 meter relay together with Veronica Campbell-Brown, Natasha Morrison and Shelly-Ann Fraser-Pryce . At the 2016 World Indoor Championships in Portland , Thompson won the bronze medal in the 60-meter run behind the Americans Barbara Pierre and Dafne Schippers.

Double victory at the Olympics 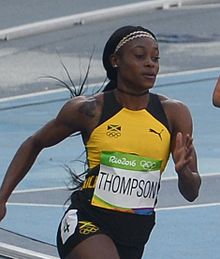 Thomspon at the 2016 Olympic Games in Rio de Janeiro

Thompson celebrated the greatest success of her career with victories in the 100 and 200 meters at the Olympic Games in Rio de Janeiro . She won over 100 meters in 10.71 seconds ahead of the American Tori Bowie (10.83 seconds) and her compatriot and defending champion Shelly-Ann Fraser-Pryce (10.86 seconds). In the 200-meter run she prevailed against the Dutch rider Dafne Schippers (21.88 s) and Tori Bowie (22.15 s) in 21.78 s. She also won the silver medal in the 4 x 100 meter relay with the Jamaican team.

In 2017, Thompson won the Jamaican 4 x 200 meter relay with a new championship record of 1: 29.04 min at the IAAF World Relays 2017 in the Bahamas with the cast Jura Levy , Shericka Jackson , Sashalee Forbes , Elaine Thompson. She then set a world best time of 10.71 s in Kingston and five victories in the Diamond League in Doha, Shanghai, Paris, London and Rabat, only interrupted by a third place over 200 meters in Eugene on May 27. Since then, they have had problems with their Achilles tendon, which have forced them to change their shoes and take longer breaks between their races. At the World Championships in London , she was only fifth in the 100-meter final in 10.98 s, after she had been the fastest runner in the semifinals with 10.84 s. Her trainer Francis said that completing three races in two days was borderline due to her Achilles tendon problems. She decided not to start over the 200-meter route and with the 4-by-100-meter relay. She ended her season at the Diamond League Finals: She was second behind Shaunae Miller-Uibo over 200 meters at Weltklasse Zürich in 22.00 s , and over 100 meters she won a week later in Brussels with a time of 10.92 s and was able to secure the prize money of 50,000 US dollars, as in the previous year.

At the World Indoor Championships in Birmingham in 2018 , she was fourth in the final with 7.08 seconds to miss a medal over 60 meters. Also at the Commonwealth Games in April she fell short of expectations when she finished fourth over 200 meters with 22.30 s and only won the silver medal with the relay. For the rest of the season, she then completely gave up the 200-meter race. She regularly took part in competitions over 100 meters, but early in the season she announced that she was still struggling with pain in the Achilles tendon. Above all, this affects the trigger from the starting block and the starting phase. After another championship title at the Jamaican championships and three runs under 11 seconds, she ended her season prematurely in July as the thirteenth fastest runner of the year.

At the IAAF World Relays 2019 she won the bronze medal with the 4 x 200 meter relay in Jamaica. With a victory at the Diamond League in Rome in 10.89 s, she then reported back to the top of the world on June 6th. At the end of June she celebrated her first double success at national championships. She won over both distances with new world annual best performances of 10.73 s and 22.00 s ahead of Shelly-Ann Fraser-Pryce. At the Pan American Games 2019 in Lima in August, she won the gold medal with 11.18 s.

Olympic champions in the 100 m run

1 The IOC recognized Marion Jones' victory in 2007; according to a resolution of the IOC, no other winner will be named.

Olympic champions in the 200-meter run