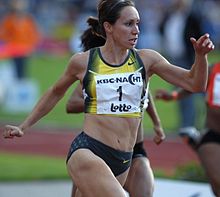 At the World Championships in 2003 in Paris / Saint-Denis, she was sixth in the final with the Belgian 4 x 100 meter relay .

In 2004 she won the silver medal over 60 meters at the World Indoor Championships in Budapest in a Belgian record time of 7.12 seconds. At the 2004 Olympic Games in Athens, she reached the semi-finals over 100 meters and was eliminated as the third-best European. Over 200 meters she was the second best European in sixth in the final.

At the World Championships in Helsinki in 2005 , she came back over 200 meters to the final and was seventh.

At the 2007 World Championships in Osaka, she won bronze with the Belgian 4 x 100 meter relay.

In 2008 she won the gold medal at the Beijing Olympic Games with the Belgian 4 x 100 meter relay. On September 5, 2008, she ended her active career with a victory at Memorial Van Damme .

Kim Gevaert is 1.70 m tall and weighs 59 kg. She completed a degree in speech therapy at the Catholic University of Leuven . Her partner is the former triple jumper Djeke Mambo.

European champions in the 100 meter run

European champions in the 200-meter run