Ulrike Meyfarth attended the Rodenkirchen high school in Cologne. In 1971, at the age of 15, she came second at the German Athletics Championships . She was able to confirm her success in the following year and qualified third for the Olympic Games in Munich .

In the 1972 Olympic competition, the then 16-year-old was one of the few athletes who jumped the Fosbury flop , shown for the first time by US high jumper Dick Fosbury four years earlier . In front of a home crowd, Meyfarth managed to increase her personal best, which was previously 1.85 m, by five centimeters. With a jump of 1.90 m she secured the gold medal in front of the Bulgarian Jordanka Blagoewa and the Austrian Ilona Gusenbauer . When the Olympic victory was already certain, Meyfarth had the bar set at the world record height of 1.92 m. The 16-year-old also mastered this height and thus set the existing world record. On the other hand, she failed three times at the new world record height of 1.94 m. Meyfarth is the youngest athletics Olympic champion in an individual competition to date.

In the years after her surprising victory, she got into a sporting crisis. Her jumps no longer had the usual consistency, and she was unable to improve her personal best until 1978. At the 1976 Olympic Games in Montreal, she did not qualify for the final, at the European Athletics Championships in Rome in 1974 and in Prague in 1978 , she finished seventh and fifth. At the 1980 Olympic Games in Moscow she was allowed because of the Olympic boycott not participate.

In 1982 Meyfarth made her comeback . She won the European Championships in Athens with a world record of 2.02 m, and the following year she won the silver medal at the World Championships in Helsinki after an exciting duel with Russian Tamara Bykowa .

On August 21, 1983, at an athletics meeting in London, both Meyfarth and Tamara Bykowa managed to increase the world record to 2.03 m. Four days later Bykowa added another centimeter.

The 1984 Olympic Games in Los Angeles were the last major competition in which Ulrike Meyfarth took part. In the end, Meyfarth prevailed against defending champion Sara Simeoni from Italy with a skipped 2.02 m and won her second Olympic gold medal twelve years after Munich. However, due to the Olympic boycott of the Eastern Bloc countries, some promising competitors were not at the start, including Tamara Bykowa. At the time of her second triumph, Meyfarth was both the youngest and the oldest high jump Olympic champion in the history of the Olympic Games. Since 2016, the record for the oldest female Olympic champion in the high jump has been held by the Spaniard Ruth Beitia , who won gold at the 2016 Olympic Games in Rio at the age of 37.

In 1987 she married the Cologne lawyer Roland Nasse. The marriage resulted in two grown daughters. Nasse-Meyfarth lives with her husband in the Bergisch Odenthal . She studied at the German Sport University in Cologne . She is a qualified sports teacher and has worked as a trainer and talent scout at TSV Bayer 04 Leverkusen since 1997 (as of 2019). 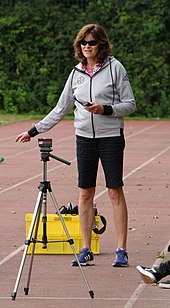 Ulrike Meyfarth is a member of the board of trustees of the Sportstiftung NRW . She volunteers for children with cancer and has been an ambassador for the Hits fürs Hospiz association for outpatient psychosocial care for children and adolescents with life-shortening illnesses and their families since 2016 . Meyfarth is a member of the association and ambassador of the neoliberal initiative New Social Market Economy .

Ulrike Meyfarth is 1.88 m tall and weighed 70 kg during her active time.

V.
German flag bearers at the Olympic Games
Germany's sportswoman of the year