Gainesville is home to Florida's largest and oldest university, a center for education, medicine, cultural events, and sports. The University of Florida and Shands Hospital are major employers in the city and provide many different jobs for the city and the surrounding area. The city is known for its myriad of parks, historical buildings, museums, natural surroundings and lakes. Gainesville was named the city with the highest quality of life in the United States in Money Magazine in September 1995.

Gainesville is the center of the Gainesville metropolitan area of the same name . The city is located around 100 km southwest of Jacksonville in northern Florida. Orlando is 100 miles, Tampa 190 km, Tallahassee 230 km and Miami 520 km away.

Long before the Spaniards landed in this area, the area was an excellent place for the Indians who lived here. The Spaniards had major problems controlling the vast area and were unable to stop the huge influx of American settlers. So they finally ceded the area to the United States in 1824. The second Seminole War slowed down the development of Florida, but after the construction of the railroad, the development increased steadily.

Statue in honor of the Confederate soldiers

The railroad age in Gainesville began in 1859 with the construction of the Florida Railroad from Fernandina here. In 1861 the route was extended to Cedar Key . In 1881, the Live Oak and Rowland's Bluff Railroad opened another railway line from Live Oak via High Springs to Gainesville, which was incorporated into the Plant System in 1884.

In 1860 Gainesville had 232 residents. During the American Civil War , Gainesville was home to a Confederate Army commissioner base and the town was the site of two major battles. After the Civil War ended, Gainesville became a trading center for cotton and agricultural goods. In the next 25 years, more citrus fruits were grown. After two major fires around 1880, the wooden houses were replaced by massive brick buildings. Another railway line ensured that the population rose to 3,000.

At the time, Gainesville was the largest city in Florida. The city already had an opera house, cobbled streets, an underground city water supply, telephones and electric lights. The further expansion of the railway brought a further boom in the trade in citrus fruits and phosphate . The area also became interesting for tourists, investors and speculators. Despite some bad harvests and severe winters around 1890, the population grew prosperous and the economy continued to focus on phosphate, cotton, and agricultural products and their industrial marketing.

The first 20 years of the 20th century were a tough test of patience for agriculture, as a new species of beetle regularly destroyed the new grain harvest and the First World War brought the phosphate industry to a standstill. The University of Florida opened its doors in 1906 and had 102 freshman students. 20 years later the number of students had already risen to 2,000. From 1920 to 1938 the university was the most important employer and the greatest help in surviving the prevailing depression. During the Second World War , the number of residents rose to around 14,000.

The time after the Second World War brought Gainesville an enormous population growth and economic boom. The influx of thousands of veterans in search of training and work has completely transformed the city. The university, which had grown to over 9,000 students in 1947, established a medical school. In 1970 the university had around 23,000 students and in 2000 over 44,000. Thus it became the most important research institution in the whole of the southern United States. Between August 24 and 27, 1990, Gainesville was the site of a series of murders. Danny Rolling raped, murdered and maimed several students. Panic broke out among Gainesville's students, hundreds of them left town and never returned.

Gainesville currently has 96 different churches from 20 different denominations . The Baptist congregation with 33 churches is most strongly represented. In addition, there are seven churches that do not belong to any denomination (as of 2004). In 2010, a small religious community wanted to burn Koran books on September 11th, which provoked protests around the world (see controversy over the planned burning of the Koran in 2010 ). On March 21, 2011 the action took place anyway. 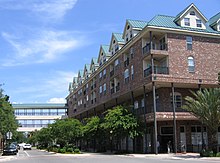 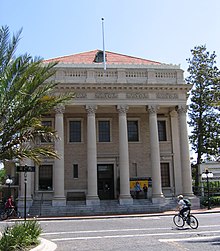 The following properties are listed on the National Register of Historic Places :

The urban area is from the Interstate 75 , from US Highway 441 ( SR 25 ) and the Florida State Roads 20 , 24 , 26 , 121 and 222 traversed. With the remote bus system Thruway Motorcoach the railway company Amtrak cities are Jacksonville , Lakeland and Palatka approached. There you can get a connection to the Silver Star and Silver Meteor trains . To the east of the city is Gainesville Regional Airport .

University of Florida , statue of Albert A Murphee