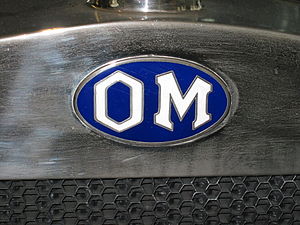 Officine Meccaniche (short OM , completely Società Anonima Officine Meccaniche ) was an Italian machine and vehicle manufacturer based in Milan . Originally founded as a rail vehicle manufacturer, OM soon expanded its product range to include automobile construction and became known for its robust sports cars and later also for its commercial vehicles.

The company was in 1899 in Milan under the full name Società Anonima Officine Meccaniche - già Miani, Silvestri & C, A. Grondona Comi & C as a fusion of engineering works A. Grondona Comi & C and Già Miani Silvestri & C. founded. The company initially manufactured steam locomotives . In 1908 one of the first steam turbine locomotives in the world was built with the support of Giuseppe Belluzzo . At the end of the thirties , OM developed the series ALn 772 diesel multiple unit for the Italian State Railways . The delivery of the vehicles began before the war and continued in the post-war period. In the late fifties years OM built for the Roman public transport company ATAC tram Großraumwagen the 8000 series , which differ in their construction on US cars PCC oriented.

In 1917, OM took over the factory of the automobile manufacturer Züst in Brescia (Brixia-Züst) . In 1918, OM began manufacturing its own cars there. From 1928 the factory in Brescia operated as its own company OM-Fabbrica Bresciana di Automobili, separate from the above-mentioned mother company in Milan, where engines and other machines were still manufactured. 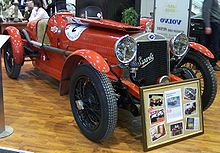 While the first vehicle from the factory in Brescia was still an undisguised copy of the Brixia-Züst brand, in the 1920s and 1930s OM built outstanding independent sports and touring cars that were known for their speed and stability.

The reason for the fame was the result of the Mille Miglia , which was held for the first time in 1927 , in which OM pilots took the first three places. The victorious 2-liter OM six-cylinder was driven by Ferdinando Minoia and Giuseppe Morandi . This car came from the pen of the designer Lucien Barratouché , who was also responsible for the “more civil” four-cylinder of the plant. In particular, the precise workmanship was a hallmark of OM.

In the mid-1930s, however, the major national competitors, Alfa Romeo , Ferrari , Lancia and Maserati , caught up in the sporting field.

As early as 1925 OM had started to manufacture buses , trucks , tractors and other commercial vehicles. In 1933, OM was taken over by Fiat . As the commercial vehicles sector was successful, while the passenger car sector had fallen into a crisis and was also in competition with the new parent company Fiat, OM stopped car production in 1934 in order to concentrate entirely on commercial vehicle construction.

In 1975, OM was integrated as a division into the IVECO Group, in which the Fiat Group bundled its commercial vehicle activities, including the French brand Unic and the German brand Magirus-Deutz , and henceforth, until the mid-1980s, only as a truck brand continued. OM designs were also marketed across the group under other brand names. B. as Magirus-Deutz and in France as Unic. In the mid-1980s, the individual brands that had been absorbed by IVECO, including OM, disappeared and were replaced by the uniform name IVECO.