Ansaldo was an Italian technology and defense contractor , which in the areas of traffic engineering , defense technology , energy technology and steel industry worked. The company was founded in 1853 under the name Gio. Ansaldo & C. was founded as a limited partnership and was based in Genoa in the Sampierdarena district . The company lost its independence in 1948 and was fully integrated into Finmeccanica in 1993, now Leonardo SpA .

Ansaldo was founded by the Genoese engineer Giovanni Ansaldo , in which the banker Carlo Bombrini, the shipowner Raffaele Rubattino and the entrepreneur Filippo Penco were also involved. The company took over the bankruptcy estate of Taylor & Prandi, which was created in 1846 by the Turin businessman Fortunato Prandi together with the British engineer Philip Taylor, which was insolvent in 1852. Like its predecessor company, Ansaldo was born out of the interest of the Savoyard government to create its own industry for the construction of steam locomotives and railroad cars as well as steam ships with the aim of becoming independent of foreign imports.

In 1854, the Sampierdarena left the factory, the first steam locomotive built entirely in Italy and at the same time the first locomotive built in the Kingdom of Sardinia. By 1860 a total of 18 locomotives had been built, 14 of which were intended for use in northern Italy and two for use in central Italy . They were quite competitive with those delivered from abroad because the delivery times were a little shorter and the labor was cheaper. At the national exhibition in Florence in 1861, Ansaldo presented the most powerful stationary steam engine in the exhibition.

With the unification of Italy, competition in the railway market increased. According to a law passed in 1863, the Officine di Pietrarsa in Naples received all orders for the southern Italian railways, so that Ansaldo was excluded from the entire market in the former Kingdom of the Two Sicilies and therefore turned to the manufacture of cannons and internal combustion engines for ships based on the invention of Eugenio Barsanti were based. In Genoa, the company was expanded with a shipyard, steelworks, foundry and electrical workshop.

During the First World War , Ansaldo produced artillery pieces and aircraft (SVA biplanes) . After the war, the company ran into difficulties due to the lack of war-related demand. The Banca d'Italia saved the company. It focused on the construction of automobiles for some time , particularly the 4 Series models were successful in the 1920s. Ansaldo's involvement in the automotive sector later developed into an independent subsidiary, SA Ansaldo , which was taken over by OM in 1932 .

In 1932, the state holding company IRI , founded by Mussolini , took over the company, which again focused on the construction of armaments. Among other things, it produced the Cannone da 75/46 modello 34 .

After the Second World War , Finmeccanica, then only operating as an IRI financial holding company , took over Ansaldo in 1948. With the dissolution of the state holding company IRI, a profound restructuring process began in the 1990s. Finmeccanica became an operational technology group that comprehensively rationalized its subsidiaries and their business areas in the course of privatization . In 1993 Ansaldo was given up as a separate company.

Companies that kept the Ansaldo name

The following companies with the name Ansaldo were retained in the Finmeccanica group : 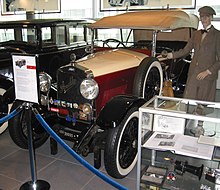 The first Ansaldo automobile was called the Tipo 4A and had a 1.8 liter four-cylinder engine with overhead valves. This also applied to the successors Tipo 4B and Tipo  4C , which were offered from 1921 and 1922 respectively. From 1922 the sports version called Tipo 4CS followed , which was immediately used by many racing drivers to take part in the competitions. On June 11, 1922, the "Coppa della Consuma" was held in Florence , a 15 km hill climb that Cesare Lotti won in an Ansaldo in the 2-liter class (the overall winner was Conte Giulio Masetti in a Mercedes). In those years, only the “upper ten thousand” class dominated the racing courses, because there were only a few works teams who gave talented but poor young drivers a chance, such as Tazio Nuvolari, who later became famous and who took part in the 1922 race in Garda Overall ranking compared to the established and much stronger competition reached 2nd place in the overall ranking on Ansaldo. From then on, the series of excellent positions in car races on Ansaldo (and later on Alfa Romeo) never stopped - but Nuvolari did not celebrate his first Grand Prix victory until 1928.

Also in 1922, the brand with the crossed cannons in its logo presented the 6A model with a 2-liter six-cylinder engine. Usually only chassis of this model were delivered, which were then clad by various bodywork companies . But there were also factory bodies such as the 6-seater touring car, which in 1924 was also available as the 6AS with a more powerful engine and was usually equipped with wire- spoke wheels with central locking. These vehicles, which had a very good reputation in terms of workmanship and driving behavior, reached 110 km / h, but cost the equivalent of around 20,000 marks (as much as a Lancia Lambda) and thus fell into the class of expensive luxury cars. From 1925 there were again improvements. The Tipo 6BC models with a 295 cm wheelbase and the Tipo 6 BN with a 320 cm wheelbase were wonderful classics that won many trophies at the Concorsi d'eleganza.

The four-cylinder engine cars have also been further developed in the meantime. As Tipo 4D and Tipo 4F , they now had different wheelbases. The last version of these extremely robust vehicles was called Tipo 14 . In addition, a smaller Tipo 10 with a 1.5-liter four-cylinder engine was created, which, however, hardly had a chance in the Ansaldo hierarchy and was much too expensive as a small car.

From 1927, the large six-cylinder units were given a 4-speed gearbox and an enlarged engine with a displacement of 2.2 liters . The top model was the Tipo 6 BS, which reached a top speed of 120 km / h. But a new six-cylinder was already in the works. In 1929 the Tipo 18 appeared with a displacement of 2.8 liters and 70 hp (51 kW), overhead valves and many details that classified these vehicles in the luxury class of the time.

For the racing clientele, Ansaldo has now designed a few two-liter four-cylinder engines with two overhead camshafts and two carburetors . After extensive tests, it was possible to save a lot of weight on the chassis. The top speed was just under 140 km / h. Racing drivers such as Mario Borzacchini and Marchese Paolo Niccoletti used this Tipo 15GS quite successfully in long-distance races - because that was the Ansaldos' trump card: The excellent workmanship and the well thought-out construction made these cars very reliable.

The top model of the series was presented to the market in 1929, the Tipo 22 . Ansaldo had long been working on a modern eight-cylinder in-line engine with slightly sloping valves and 90 hp (66 kW), which was characterized by its silky smooth running. The top speed of a fully equipped limousine was 140 km / h, an impressive figure for that time. Industrial magnates, artists, noblemen and other celebrities discovered the Ansaldo Tipo 22 . It was very easy to chauffeur, was a very comfortable touring limousine and, thanks to its very good road holding, offered the desired safety even at higher speeds. Ansaldo could boast of having developed a steering that was quite smooth and precise for the times. The 4-speed gearbox was noiseless and interlocked with the engine housing.

For example, some Tipo 22 chassis for prominent customers from Castagna (Milan) and Montescani (Turin) were provided with individual sports bodies. Viotti built a racing car for a shareholder of the Ansaldo Group, which is said to have reached 160 km / h with a streamlined body. This vehicle was never used for racing and is now considered lost. Not many of these large eight-cylinder Ansaldos have survived at all. It is not known how many were actually built in total. The outbreak of the global economic crisis also put an end to the soaring. In May 1931 the share capital was reduced and the Ansaldo automobile factory was sold to the Italian company OM, which in turn was taken over by FIAT in 1933. Nevertheless, production of the six- and eight-cylinder chassis continued until 1937. The chassis, known as Tipo 33 (six-cylinder) and Tipo 42 (eight-cylinder) from 1934 onwards, were sold in extremely small numbers in order to recycle the remaining parts. The result was often very elegant creations, because every customer had their chassis bodyworked according to their own wishes at a bodywork factory.

The well thought-out designs with excellent technology and, above all, cultivated driving safety, coupled with the possibility of high continuous speeds, had made the Ansaldos known in vehicle construction in the 1920s and 1930s.

As part of the developments for defense technology, the 210/22 howitzer , the P26 / 40 tank and the Ansaldo A.1 Balilla and Ansaldo SVA aircraft were manufactured.