from Wikipedia, the free encyclopedia
This is the spotted version , flagged on July 9, 2020 . There is 1 pending change that has yet to be viewed.

The KK Hitachi Seisakusho ( Jap. 株式会社日立製作所 , Kabushiki-gaisha Hitachi Seisakusho , English Hitachi Ltd. Corporation ) is a Nikkei 225 listed global conglomerate with more than 325,000 employees. The company is based in the Japanese capital Tokyo . 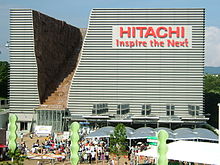 Founded in 1910 in the town of the same name by Namihei Odaira ( 小平 浪 平 , Odaira Namihei ) as a workshop for electrical engineering, the company quickly developed into a production facility, and in the same year electric motors were mass- produced. In the following years further products were added, including a. Industrial plants, household appliances and communication systems, later also entertainment electronics and information electronics as well as software.

Within a very short time, the company advanced to become the market leader in the manufacture of electric motors and electrical energy systems on the Japanese domestic market. HItachi is derived from the name of the old Hitachi province in which the company is located. However, the old complicated characters 常 陸, which are also difficult to read, have been replaced by simple ones. By superimposing the Kanji - symbols hi (日, "Sun") and tachi (立, "rise"), the company name was coined, reflecting the national ambitions of the young company and its trademark made.

In 1911, the subsidiary of the Kuhara Fusanosuke Mining Company was founded in Hitachi, Ibaraki. The following year, Japan's first reinforced concrete power plant, the Ishioka Power Plant, was built.

In 1918 the merger of Kuhara Mining Tsukishima Mfg. To take place at the Kameido factory. The company's headquarters were relocated to Tokyo (Hisashi Works Hitachi, Ltd.). During a management crisis in 1920, Hitachi, Ltd. completely independent the Kasado shipyard of Japan steamers from Kuhara and began manufacturing electric locomotives .

In 1924 the first large electric locomotive "ED15" was completed and in the following year several copies were delivered to the Ministry of Railways and 30 turbines were exported to the United States of America .

Production of the elevators started in 1927. The company also successfully participated in the development of the electric refrigerator .

During the Second World War , the companies shifted their capacities mainly to the manufacture of military machinery - engines for aircraft were produced. After the defeat of Japan, the company collapsed and suffered for a long time from the aftermath of the war. Many of their factories were destroyed by Allied bombing, and after the war, American occupation forces attempted to disband Hitachi entirely. Founder Odaira was fired from the company.

Still, after three years of negotiations, Hitachi was able to keep all but 19 of its production facilities. However, the cost of such a production shutdown, compounded by a three-month workers' strike in 1950, severely hampered Hitachi's reconstruction efforts. Paradoxically, only the Korean War saved the company from total collapse. Hitachi, like many other Japanese arms manufacturing companies, profited from the orders placed by the American military.

Meanwhile, Hitachi became a public company in 1949 and went public .

After a failure of the cooling basin on March 15, 2011, Unit 4 of the Fukushima-Daiichi nuclear power plant was largely destroyed . In April 2011, the then President Hiroaki Nakanishi nevertheless called for a further expansion of nuclear energy in Japan.

As a large conglomerate, Hitachi is now one of the largest companies in the world . In terms of sales, the group was ranked 38th in 2012.

Acquisition of the power grid division of ABB

On December 17, 2018, Hitachi announced the acquisition of the power grid division of the Swiss-Swedish technology company ABB for US $ 11 billion. The acquisition of ABB is the largest acquisition in Hitachi's history, which is more than a hundred years old. With the takeover of the ABB power grid business, Hitachi wants to expand its own range of solutions in the five areas of mobility, lifestyle, industry, energy and information technology. The acquisition is expected to be completed by mid-2020. At the ABB Group, 37,000 of the 150,000 employees work in the electricity network division, 2,800 of them in Switzerland. ABB Switzerland is thus losing almost half of the total workforce of 6,000 to Hitachi. Hitachi and ABB have had a close business relationship in the high-voltage business since 2014.

In the course of the development of the group, a number of companies were acquired or sold. Today the activities are divided into the main business areas Power Systems Group , Infrastructure Systems Group and Information & Telecommunication Systems Group .

Hitachi has been working with General Electric in the nuclear technology sector since 2006 in the GE Hitachi Nuclear Energy joint venture . Hitachi is represented in Germany by the plant manufacturer Mitsubishi Hitachi Power Systems Europe . The company, which emerged from the bankruptcy estate of Babcock Borsig and is based in Oberhausen, established a new company headquarters in 2007 in Duisburg's inner harbor , the Hitachi Power Office . 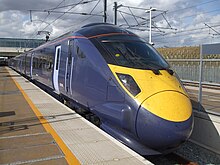 Hitachi has been building rail vehicles and rail systems under the Hitachi Transportation Systems name since 1920 . From 1986 onwards, excavators were produced in a joint venture with Fiat under the name Fiat-Hitachi . In 1988 the Deere-Hitachi joint venture was founded with John Deere to manufacture and sell construction machinery in North America. In 2000, Hitachi acquired a 20 percent stake in the Indian construction machinery company Telcon from Tata Motors . The shares in Telcon were increased by a further 20 percent in 2005 and 2010.

Hitachi Data Systems was founded in 1989 as a joint venture with Electronic Data Systems . Originally, HDS was supposed to market Hitachi mainframes . In 1990 the company employed 290,810 people. In 1999 Hitachi took over the shares in EDS and has since expanded the company into a provider of storage solutions. The joint venture Hitachi-Omron Terminal Solutions was founded with the Japanese company Omron in 2004 to manufacture and sell card readers (motorized and manual readers / writers for magnetic stripe cards and chip cards in ISO format). The Hitachi Maxell subsidiary is a company that sells and manufactures batteries and storage media. Hitachi-LG Data Storage was founded in 2001 together with the South Korean company LG Electronics to manufacture optical drives . 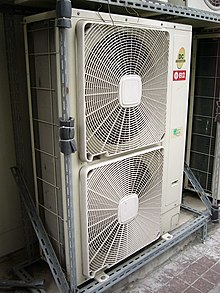 The semiconductor sector was spun off in 2003 into the newly founded joint venture with Mitsubishi Electric Renesas Technology , into Hitachi u. a. The H8 - microcontroller family and SuperH - processor architecture brought. In 2000, the Hitachi Group entered the consulting business and has been operating there since 2003 under the name Hitachi Consulting . Hitachi also manufactures products for medical technology (diagnostic systems and devices for imaging diagnostic methods, such as computer tomography or magnetic resonance tomography ). The company is also one of the leaders in the field of proton therapy - research, development and sales of such equipment as medical therapy facilities. Hitachi also manufactures electrical appliances such as air conditioners, refrigerators, LCD projectors and washing machines. The former subsidiary TCM Corporation manufactured forklifts, was merged with Nissan Forklift (including Atlet ) in 2013 to form UniCarrier Corporation, which was taken over by Mitsubishi Heavy Industries (MHI) in 2015 .

Hitachi also manufactured hard drives , initially 2.5-inch notebook hard drives developed in-house. In 2003 the IBM hard disk division including all model series such as Deskstar and Travelstar as well as the development department was taken over. The takeover of the resulting Hitachi Global Storage Technologies (HGST) by Western Digital in 2011 was approved by the EU Commission subject to conditions.

Machines for the trade

Hitachi manufactured battery-powered machines for handicrafts and do-it-yourself work under its own name until 2018, which were sold internationally and, above all, established on the Iberian Peninsula over the past decades through direct sales. At the end of 2018, Hitachi changed the brand name to Hikoki.