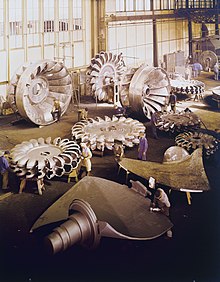 A turbine ( Latin turbare , 'to turn' ) is a rotating fluid flow machine that converts the drop in internal energy of a flowing fluid (liquid or gas) into mechanical power ( torque times speed ), which it emits via its shaft .

A part of its internal energy (mostly consisting mainly of kinetic , positional and pressure energy ) is withdrawn from the fluid flow by the turbulence- free ( laminar ) flow around the turbine blades , which is transferred to the rotor blades of the turbine. About this, the turbine shaft in rotation is then added, the usable power is supplied to a implement coupled to work machine such as a generator , submitted.

Power plant turbines are among the most powerful machines . Their mechanically usable output reaches almost 1.8  gigawatts in the largest nuclear power plants , whereby a turbine consists of several turbine sections (high, medium and low pressure turbine (s)) for high outputs. The steep torque - characteristic of the generator maintains a constant speed of the power plant turbine, otherwise must the rotational speed via a controller are kept constant.

Colloquially, the term turbine is also used for jet engines , although the turbine is only part of the engine; the engine also consists of a compressor , combustion chamber and other components.

The term “turbine” was coined by the French engineer Claude Burdin .

This section does not separate well enough between an individual impeller and an overall turbine, which contains further components that contribute to the power conversion - for example the guide vanes or the flow channel cross-section; in addition, turbines are sometimes multi-stage. The section needs to be revised. More details should be given on the discussion: Turbine . Please help to improve it , and then remove this flag.

Application of Euler's turbine equation to machines with axial flow

Perspective representation of the physical quantities for Euler's turbine equation

The theoretical foundations for calculating any type of turbine were laid by Leonhard Euler in the 18th century .

The basis of Euler's turbine equation can be found in the conservation of the angular momentum of a material flow in a closed system:

The change in momentum within a subsystem (here: the turbine blades) creates a torque around the center of the turbine:

It makes sense that only parts of the flow velocity of the fluid that are perpendicular to the turbine pivot point in the sense of the lever law can provide a part of the torque . Such shares are marked with the index u .

An integration of the formula gives the following result:

The relationship between torque, speed and power is calculated as follows:

with as the greatest possible circumferential speed in a considered cross-section.

The last equation is called Euler's turbine equation . Your solution is:

In reality, for the rough turbine design, the friction losses of the flowing fluid must also be taken into account.

This section applies to gaseous fluid turbines only and contains physical errors; needs revision. More details should be given on the discussion page in the section Revert from 6.5.2019 . Please help to improve it , and then remove this flag. 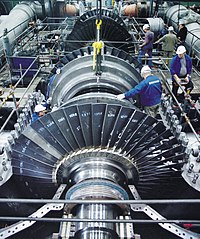 Assembly of a steam turbine

As a rule, several blades are attached to a hub , creating a blade or impeller . The blades have a curved profile , similar to an airplane wing.

If turbines are installed in a housing with a flow, there is a stator in front of each impeller stage. The guide vanes protrude from the housing into the flowing medium and give it an angular momentum (swirl). The swirl generated in the stator ( kinetic energy ) is reduced as completely as possible in the following impeller in order to drive the shaft on which the impeller blades are mounted via the hub. The rotation of the shaft can be used to drive a generator, for example. Ultimately, the mechanical flow energy of water power , steam or air is converted into electrical energy. Idler and impeller together are referred to as a stage . In gas turbines and especially in steam turbines, several such stages are connected in series, water turbines are single-stage. Since the stator is at a standstill, its guide vanes can be attached to both the inside and the outside of the housing, and thus connect a bearing for the shaft of the impeller. Free-standing turbines (for example in wind power plants ) usually have no guide wheel and only one stage. The wheels are decisive for the classification of the levels - each is the basis of its own level.

If a turbine is driven with the help of a compressor and a combustion system for gas or oil , the entire system is called a " gas turbine ". Gas turbines are used, for example, in airplanes , ships or in gas and oil power plants . Turbine jet engines are gas turbines that propel aircraft in whole or in part through the recoil of their accelerated exhaust gases ( thrust ). Turbine-driven turbines generate a larger part of the thrust by means of a turbine-driven fan.

There were wind turbines that were designed with only one rotor blade (and a counterweight), the so-called single - wing units .

The Ljungström turbine is a type of steam turbine that works without guide vanes. The turbine, through which the turbine flows radially from the inside to the outside, consists of two interlocking halves that rotate in opposite directions. The impeller blades of one half act as guide blades for the other half. In the Pelton and Laval turbines, the diffuser is reduced to one or more nozzles.

Turbines can be differentiated according to various criteria:

Compressibility of the medium used

Differentiation according to the direction of flow of the medium: