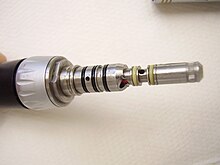 Coupling for docking the turbine elbow to the supply hose

Turbine head, easy to see:
in the middle the fit for the FG shaft, 4 spray nozzles and the light guide (oval window)

A turbine ( engl. Dental turbine ) is in the dentistry an angled preparation instrument with which the dentist works orally. It is used for drilling and grinding human teeth and is connected to a dental unit with standardized connections. A turbine can be used for conservation and prosthetic treatment. It is characterized by its very high rotation speed. In contrast to a dental contra-angle handpiece , it is not driven by a motor , but by compressed air that drives a small turbine wheel. Dental turbines are used to drive grinding tools ('drills'). Depending on the design and operating pressure, they reach speeds of around 150,000 to 450,000 / min, but have a lower torque compared to contra-angle handpieces .

As with contra-angle handpieces and handpieces, you can work with oscillating and rotating attachments on the coupling piece , but they have other purposes: tartar removal , scaling , retrograde root fillings , sinus lift or implant cleaning .

In 1957, the first air pressure turbines developed in the USA came on the market as "dental drills". At that time it was called "Airotor". The first turbine developed in Germany came from KaVo Dental and came onto the market in 1959. Until then, "Super drill" with a had speed of 20,000 min -1 , the highest speed. The normal drills available at the time reached 5,000 min −1 to 6,000 min −1 , those with "overdrive" about 8,000 min −1 to 12,000 min −1 and used steel drills . The turbines were compared with it at a speed of 300,000 min -1 a significant development. The cost of such a turbine was around 2000  DM , a not insignificant investment for a " drilling machine " at the time. At that time, turbines were still separate devices, i.e. not yet built into the treatment device. Since then, the turbines have been continuously developed and are now integrated into every modern treatment unit. 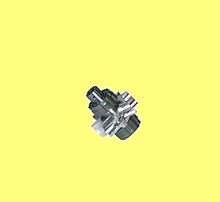 Turbine wheel of a dental turbine

While with an electric micromotor the power is transmitted to the working head via a shaft , with a turbine the rotation of the drilling or grinding tool is generated by an air flow in the head of the contra-angle handpiece. For this purpose, the tool is provided with a turbine wheel with around 6 to 8 turbine blades. Depending on the model, the driving air pressure is between 2.3 and 2.7 bar . The propellant air is then returned because it would interfere with the treatment if it escaped into the oral cavity. As a rule, turbine heads have a fit for rotating dental instruments with an FG shaft . As rotating instruments, diamonds are mainly clamped, sometimes also hard metal drills, for example to cut through crowns or bridges . Today air-pressure driven turbines are mostly used.

There are two types of turbines:

The first generation of the turbines was air-bearing , whereby the air flow driving and surrounding the turbine wheel kept it in the central position. This bearing enables a speed of 450,000 min −1 (revolutions / minute), but the speed decreases enormously under load, so that a standstill is achieved even with relatively low contact pressure. In addition, the bearing shells are quickly destroyed if they touch. Vibrations and noise levels are, however, extremely low with this type of bearing.

The second generation of turbines was equipped with steel ball bearings. Initially, these turbines could only run at a speed of 300,000 min −1 , but this has been increased to 400,000 min −1 over the years . Even with little wear or damage to the ball bearings, the noise level increases enormously. In the long run, this can lead to hearing damage for dentists and their assistants.

The latest generation of turbines has ceramic ball bearings that allow a speed of 400,000 min also -1 can be reached. Ceramic ball bearings have the advantage that they show less wear and tear and generate significantly less noise (only about 60 dB (A) ( decibels ), but above all run with very little vibration . This enables teeth to be prepared more precisely and pain during treatment to be reduced .

A water spray for cooling is essential for working with a turbine. Without cooling spray, which is sucked off again by a powerful suction system, a tooth would be damaged very quickly due to overheating. The spray is generated from a mixture of preheated water and air and is sprayed through three or four small nozzles from different sides at the same time directly onto the tooth and the instrument working on it. The water flow should be at least 50  milliliters per minute. Some devices are equipped with a replaceable microfilter that prevents the fine nozzles from clogging.

A back suction stop is built into dental turbines, which prevents contaminated spray (back suction phenomenon) from entering the turbine. A glass rod light guide illuminates the working area with up to 25,000 lux . Likewise, the turbine can be used as an air blower when stationary, which dries the work area in order to better assess the progress of the drilling and grinding activity.

Modern dental turbines work with very little vibration. Compared to the alternative drive combination of micromotor and contra-angle handpiece, a turbine is less complex. The single turbine elbow is cheaper than a high-speed elbow. The risk of overheating is very low.

The pulling power is significantly lower than that of an electronically controlled contra-angle handpiece. The speed cannot be regulated. It is not possible to change the direction of rotation (clockwise / counterclockwise rotation). The turbine does not stop immediately when it is switched off, but has a certain overrun. In this respect, however, progress can be expected in the next few years. Due to the very high speed, the enamel structure of the tooth is loosened up to 0.1 mm from the preparation margin when drilling, which makes reworking with fine instruments at a lower speed necessary. The high-pitched whistle of the turbine is sometimes suspected of causing damage to the practitioner's hearing . However, this could not be proven when using normally maintained turbines. Progress has been made in reducing noise levels.

The requirements for the implementation of the European standards for the reprocessing and sterilization of instruments (which also include the turbines) are becoming ever higher.

The manufacturer's instructions must be observed in detail. In general: