The entrance of the Expo site 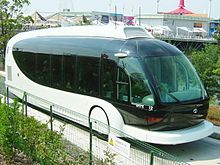 Fully automated buses without a driver on a route within the Expo site (Toyota Intelligent Multimode Transit System, IMTS)

The World Exhibition Expo 2005 ( Jap. 愛知万博 , Aichi bampaku ) took place from 25. March bis 25. September 2005 in the Japanese prefecture of Aichi instead. The central Expo site was in Nagakute Municipality, east of Nagoya , with further exhibitions in Seto City .

Nagoya had applied to host the 1988 Summer Olympics , but the South Korean capital, Seoul , won the bid . Then the idea arose to use this area for a world exhibition. In 1997, Japan was awarded the contract to host Expo 2005.

Originally, the planning was based on a total of 25 million visitors. After the bad experience of the Expo 2000 in Hanover , the forecast was reduced to 15 million visitors, which in the end was exceeded by far.

The motto of the expo was Shizen no Eichi ( 自然 の 叡智 , wisdom of nature ).

The Expo had the nickname Ai Chikyū-Haku ( 愛 ・ 地球 博 , love - world exhibition ) in the logo . In this play on words , the names of the organizer prefecture Aichi merged with the words Ai ("love") and Chikyū ("earth, world").

The Nagakute site was 185 hectares and featured the following attractions:

Automatic buses drove across the site in Nagakute, and visitors could also take a cable car from the northern to the southern part of the exhibition. Another cable car connected the two Expo locations in Nagakute and Seto.

On the much smaller site in Seto (15 hectares) there were the pavilions of Japan and Aichi Prefecture as well as a citizens' pavilion.

A total of 22,049,644 people visited Expo 2005, which significantly exceeded the organizers' corrected forecasts and was close to the original expectations.

Only 5% of the visitors were foreigners, mostly from South Korea , Taiwan , the People's Republic of China and the USA . This was a disappointment for the organizers, who had expected 10% foreign guests.

At the official opening ceremony of Expo 2005, an orchestra with musicians from all over the world (“Super World Orchestra”) played the classic piece “I'll Be Your Love” written especially for the occasion by Yoshiki, the leader of the band X-Japan . Yoshiki conducted the orchestra himself.

For fear of terrorist attacks and possible food poisoning, extensive security checks were carried out at the beginning of the Expo 2005 to ensure that no drinks and food from outside reached the site. However, after strong protests against this regulation, especially from school classes and schools, in the first few weeks, the Expo management lifted this ban at the request of Prime Minister Junichiro Koizumi .

The area after the end of the expo

Immediately after the expo ended, extensive demolition and renovation work began on the site. Almost all of the attractions and pavilions were demolished and the site was transformed into a park, which opened under the name Ai Chikyū-Haku Kinen Koen ( 愛 ・ 地球 博 記念 公園 ) on July 15, 2006 and has been operated by Aichi Prefecture ever since . Further construction work was carried out until 2010.