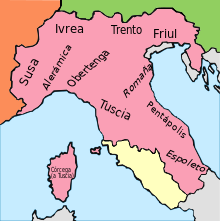 The Margraviate of Ivrea with the capital Ivrea played a prominent role in Italian politics in post-Carolingian times . The Anskarian family, later called the Burgundy-Ivrea family , provided three kings of Italy as margraves of Ivrea: Berengar II and his son Adalbert II and his nephew Arduin .

Arduin von Ivrea took power around 990 and waged several wars against his neighbors, especially against Bishop Leo von Vercelli , who in turn was supported by the Ottonian imperial family.

After Arduin's death the margravate fell apart and the bishops of Ivrea, together with the communal institutions, became the determining force; in the 12th century one proceeded against Friedrich Barbarossa . The flourishing at the beginning of the 12th century was followed by the formal incorporation into the Margraviate of Montferrat in the second half of the 13th century . In the 14th century the margravate fell to Savoy .