Alberobello is a city in the metropolitan city of Bari in the Italian region of Apulia . The place enjoys national fame for its trulli - small, mostly white round houses - which were declared a World Heritage Site by UNESCO in 1996 .

After Italy entered the war in June 1940, the fascist regime set up an internment camp (campo di concentramento) in Alberobello . The internees were housed in a former agricultural school, the Casa Rossa , located a few kilometers from the town center in the hamlet of Alberto della Croce . From 1940 to 1943 a total of 208 inmates were interned in Alberobello. The first internees - English , Irish , Maltese and Indians - were soon relocated to make way for Italian and foreign Jews, members of the Slavic minorities in the Italian border provinces and Yugoslavs from the areas occupied and annexed by Italy. Anti-fascists were also in the camp. In the summer of 1942 the Jewish internees were transferred to Calabria , to the Ferramonti di Tarsia internment camp . The occupancy peaked in July 1942 with 105 people.

There were latrines and a toilet. Medical care was limited because there was no hospital room. The rooms could not be heated and there was a lack of warm water. When “ex-Yugoslavs” arrived in Alberobello in August 1942, the camp was fenced in with barbed wire. The last internees left Alberobello on September 6, 1943.

The city is particularly famous for its cone buildings ( trulli ) (singular trullo), which are based on the model of shepherds' huts in this area. In Alberobello, entire districts are made up of trulli. That is why the place is now part of UNESCO - World Heritage Site , but has lost by the tourist onslaught much of its original charm.

Trulli are not only found in Alberobello itself, but also in the surrounding area, but they are very common in Alberobello. Trulli are mostly round, but also on a rectangular floor plan, painted white buildings with characteristic conical roofs made of limestone slabs, which are layered without mortar in the form of a false vault . In a certain way, this construction resembles the primeval residential buildings of mankind, as can be found in other places around the Mediterranean, e.g. B. in Sardinia in the form of the nuraghi or in southern France as bories .

It is not clearly documented since when these trulli have existed in Apulia. There is a special reason for the widespread use of this type of construction in Alberobello: Giangirolamo II. Acquaviva , as Count of Conversano feudal lord of the area, wanted to avoid a regulation in the Kingdom of Naples in the 17th century , according to which it was forbidden to open new towns without permission to found. This permit cost money.

But now more and more new settlers settled around Alberobello. Girolamo made it an obligation on all of them to stick to the construction of these trulli. These were just as quick to dismantle as to reassemble. And when an imperial control commission was announced, the roofs were dismantled to demonstrate to the collectors that a poor collection of half walls could not be called a new settlement. So no taxes had to be paid. The success of this measure led to an order not to use any mortar at all in Alberobello, and so this design became a tradition. 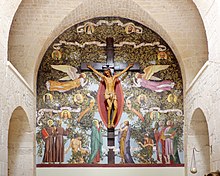 Crucifix with Christ and mural

The church was built between 1926 and 1927 on the initiative of Bishop Domenico Lancelotti in the Monti district (Rione). From 1945 the church became the second parish church in Alberobello and from 1952 it was led by Guanellians ("Servants of Charity"), a congregation of priests. The uniqueness of the building, which is shaped like a Greek cross , lies in the reproduction of the features of the trulli that surround it. The typical conical roof of the trulli can also be found in the 21 meter high dome and the 18 meter high bell tower.

The main altar consists of a stone monolith made from local limestone. In 1959 the church was enriched with a large almond wood Christ, which stands on the wall in front of the mural The Tree of Redemption . Both works were made by Adolfo Rollo . Faces of various saints are depicted on the fresco . Saint Catherine and Saint Dominic look down from the top left ; they are followed by Saints Elena and Saint Luigi Guanella , the apostles Peter and Paul , Saint Benedict and Saint George , Maria Magdalena and Saint Lucia . The foot of the cross is framed by the Madonna, suffering in love, and the apostle John with gestures of devotion, while Saints Anthony and Francis of Assisi seem to be resting on the edge on their left . A kneeling Adam finds his counterpart in Eve in the same position to the right of the cross. On the far right we find the Saints Cosmas and Damian .

The almond crucifix is ​​guarded by two peacocks, which symbolize eternity, and at the same time forms the trunk of the tree of life with many branches and numerous leaves. Below that we read the Hymen Vexilla regis . The prayer is sung on Good Friday in honor of the Holy Cross, which represents salvation through Christ. Two angels fill the space on both sides of the cross with accentuated horizontally outstretched bodies

The Trullo Church has been a UNESCO World Heritage Site since 1996.

The main industry is tourism .

Alberobello has a train station on the Bari – Martina Franca – Taranto line .

Parishes in the metropolitan city of Bari in the Apulia region