The title of this article is ambiguous. Further meanings are listed under Mottola (disambiguation) .

Mottola is a municipality ( comune ) in the southern Italian province of Taranto .

From the end of the 11th century until 1818 Mottola was the seat of a suffragan diocese of Taranto , then it was united with the diocese of Castellaneta . In 1968 it was used as the titular bishopric of Motula .

In 1102 the place was destroyed in a popular uprising. 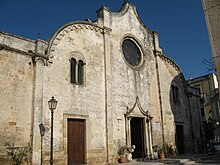 The Chiesa Madre di Santa Maria Assunta dates from the 12th century. Its facade architecture has striking similarities with the churches of Laterza and Ostuni .

To the south of the village is the Palagiano-Mottola station on the Bari – Taranto railway line , and to the north was the San Basilio-Móttola station , which was abandoned when the new line went into operation in 1997.

Municipalities in the province of Taranto in the Apulia region