Helena (mother of Constantine the Great) 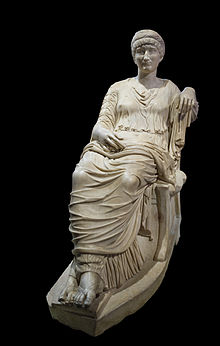 Seated statue from the time of Antonine (end of the 2nd century), the head of which was converted into a portrait of the imperial mother in Constantinian times ( Capitoline Museums , Rome)

Flavia Iulia Helena (* 248/250 in Drepanon , today Karamürsel , in Bithynia ; † probably on August 18 around 330 in Nicomedia , today İzmit ), also Helena of Constantinople , was the mother of the Roman emperor Constantine , from whom she became Augusta was appointed. She is venerated as a saint in the Catholic and Orthodox Churches .

Helena was probably born in Drepanon in the province of Bithynia on the Bosporus in 248/250 . She came from a very simple background. The church father Ambrose of Milan writes that she was a good hostess. As a rule, a low background is assumed, but there is also the possibility that they came from a higher background. For example, there are British legends that see her as the daughter of a British king named Coel .

She had a relationship with the Roman officer Constantius and gave birth to their son Constantine between 272 and 280. Whether Constantius and Helena were also married is controversial. The two may be living in a long-term cohabitation . Constantius Chlorus separated from Helena in 289 in order to marry Flavia Maximiana Theodora , the stepdaughter of Emperor Maximian . He was adopted by Maximian and made a Caesar (lower emperor) in 293 under the Tetrarchy .

After the death of Constantius Chlorus, his son took over Constantine's army father and was on July 25, 306 by the army in what is now York to Augustus proclaimed (Upper Kaiser). After taking office, he brought his mother to Trier . While Constantius Chlorus remained heather, Helena was baptized . Her son Constantine triumphed in 312 under the banner of Jesus Christ against his opponent Maxentius in the battle of the Milvian Bridge and issued the Edict of Tolerance of Milan the following year .

According to the testimony of Bishop Ambrose of Milan and Eusebius of Caesarea , Helena traveled to Palestine at the age of probably 76 . On the way she also made a stop in Cyprus , which would later play a role in the efforts of the local church on autocephaly .

In Jerusalem , around 326, Helena pointed out to Bishop Makarios that, according to tradition, the tomb of Christ must lie under a temple of Venus built by the Romans in the 2nd century . This temple was built by Emperor Hadrian after the Bar Kochba uprising to end the worship of the tomb by Christians, because already in the first 100 years after the crucifixion of Christ , Golgotha (the biblical place of the crucifixion) and that approximately Tombs 40 meters away have been places of worship for the growing Jewish Christian community .

When Hadrian founded the Colonia Aelia Capitolina over the destroyed Jerusalem after the suppression of the uprising in 135 , he is said to have consecrated the city to his favorite goddess Venus and to have built a large temple over the early Christian shrines on the western edge of the forum. A high terrace , on which a stele of the goddess now rose, is said to have covered the presumed holy grave and the entire Golgotha ​​rock . It is thanks to this artificial terrace that the two sites have been preserved.

Helena had the remains of Christ's cross divided into three parts. A third of the cross remained in Jerusalem; the imperial mother took a third to Rome; a third she sent her son to Constantinople. The Jerusalem part of the Holy Cross was in a silver, after some gilded box and is said to have been found there by the conquering crusaders in 1099. The large piece of wood of the Holy Cross in the Vatican was brought to St. Peter's Basilica in 1629 on the instructions of Pope Barberini Urban VIII from Santa Croce in Gerusalemme , where it is today in the reliquary chapel of the Holy Cross in one of the four pillars of the mighty dome above Helena statue by Andrea Bolgi completed in 1639 is kept. The constantinopolitical part of the cross relic is said to have been divided among the crusaders after the conquest of the city in 1204 and so found their way in many splinters into churches and monasteries of Catholic Christianity.

Helena and her son Constantine had a basilica , the Church of the Holy Sepulcher , built over the grave and the location of the cross . The Church of the Nativity in Bethlehem and later destroyed Eleona - (ie Helena-) basilica on the Mount of Olives go back to Helena. She is also the founder of many other church buildings in and around Jerusalem as well as in other places.

Relics of the Magi

Helena is also credited with finding and taking the relics of the Three Kings . Initially the relics were owned by the family and were later given to Bishop Eustorgius . They eventually came to Milan until they were brought to Cologne Cathedral by Emperor Friedrich Barbarossa . The fabrics obtained are very similar to comparative pieces from Syria at the turn of the century.

The years between 329 and 335 are given as the date of Helena's death. 329 is most likely the year of death because after that no more coins were minted with her name. She probably died on August 18, 329 in Nicomedia ( İzmit ). She was buried in the so-called Helenamausoleum in the southeast of Rome. The so-called sarcophagus of Helen made of red porphyry is now in the Vatican Museums. The battle scenes between Romans and Germanic tribes on the sarcophagus indicate that the sarcophagus was originally intended for a general, perhaps Emperor Constantine himself.

Today the relics of the saints rest in a large porphyry tub under an octagonal altar structure in the left transept of the Church of Santa Maria in Aracoeli in Rome . In Trier Cathedral , Helena's head is venerated as a relic. Emperor Charles IV gave this to the Archbishop of Trier.

St. Helena is, among other things, the patron saint of nail smiths (because of the traditional discovery of the cross nails of Christ, one of which is venerated as a relic in Bamberg Cathedral , one in the Holy Lance in Vienna and another in the Roman Church of Santa Croce in Gerusalemme ). In addition, their intercession against storms and the risk of fire is implored. The day of remembrance is one of the festivities of the Knightly Order of the Holy Sepulcher in Jerusalem .

To a great devotion to St. Helena mainly came to Bonn in the 12th century, where legend has it that the empress was the founder of the Bonn minster or the first church above the graves of Christian martyrs (St. Cassius and Florentius ). Numerous representations in Bonn Minster and many other churches and chapels in Bonn, such as the baroque Kreuzbergkirche, bear witness to this . 1135 received the provost of the Cassius monastery , Gerhard von Are , relics of St. Helena, which was lost in a pillage in the 16th century. In 2012, the Trier cathedral chapter donated a relic from the reliquary treasure of Trier cathedral to Bonn Minster in order to close the “sensitive gap in veneration”, as stated in the deed of donation.

St. Helena churches are for example in:

The island of St. Helena in the South Atlantic is named after the saint and imperial mother, as are other cities (see St. Helena and Santa Helena, among others ).

In the past, St. Helena is often confused with the Welsh saint Helen of Caernarfon (Welsh: Elen Luyddawg ), who, although she also had a son named Constantine, lived sixty years after Flavia Iulia Helena. 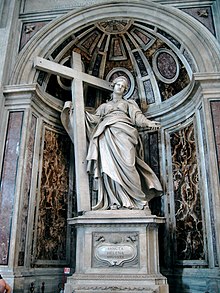 Representation of Helena at the Greek Chapel in Wiesbaden

One of the most famous representations of the saint is on one of the four main pillars of the dome of St. Peter's Basilica . A monumental statue by Andrea Bolgi created in 1639 shows Helena with the cross of Christ. Above is a chapel with a balcony, to which in 1629 the largest piece of the cross still preserved in Rome was transferred from the church of Santa Croce in Gerusalemme on the instructions of Pope Barberini Urban VIII .

The figure of Helena also appears in pictorial representations of the nine good heroines , she is a representative of Christianity in this iconographic series.

The term "from Constantinople" is not ancient. It comes from the time of the Crusades , when the Empress was to be moved into the geographical proximity of Christian Byzantium or the city of Constantine was to be brought into connection with the saint. In fact, Helena's birthplace Drepanon, which Constantine had renamed Helenopolis while she was still alive , as well as the neighboring city of Nicomedia were her real centers of life for decades. Both cities are only about 40 km from Constantinople . For some time Helena lived in her relationship with Constantius in Naissus ( Niš ), where she gave birth to her son. Only at the age of 57, after Constantine's appointment as Caesar in 306, she moved to Trier and followed him to Rome from 309.