This article deals with a historical coin; for other meanings of the same name, see Solidus (disambiguation) . 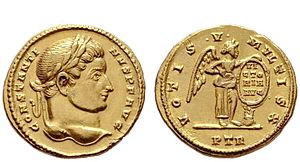 The solidus was first coined by Constantine the Great in Trier in 309. Here is a copy for the fifth imperial jubilee d. H. in the year 311. The letters PTR stand for Percussa TReveris d. H. beaten in Trier

The solidus or aureus solidus was a Roman - Byzantine gold coin . It was introduced as a new denomination in place of the aureus by the Emperor Constantine the Great in 309 and remained for more than a millennium until the conquest of Constantinople (1453) , from the 10th century as the histamenon and from the 11th century as the hyperpyron Circulation. In the 5th and 6th centuries, many millions of solidi circulated throughout the Mediterranean and beyond. The solidus was until the early 12th century, the "reserve currency" for all of Europe and the entire Mediterranean region and is also known as Euro of the Middle Ages called.

The millennial history of the solidus

The aureus, which was replaced by the solidus , had been the standard Roman gold coin since Emperor Augustus . Since the aureus lost massive fineness and thus value in the 3rd century, a reform was necessary to restore confidence in the reserve currency. Constantine had the solidus first minted around 309 in Augusta Treverorum ( Trier ), his residence at the time. Under his rule, the new aureus solidus - that is, the "firm, reliable aureus " - not only became the general imperial coin in 324 , but quickly gained importance beyond the borders of the empire.

The ratio between the old aureus and the new solidus was 5: 6. This means that solidi and aurei could circulate next to each other in the transition phase, 5 aurei corresponded to 6 solidi . The weight and thus the value of the solidus was 1 ⁄ 72 of the Roman pound and thus 1 ⁄ 6 of an ounce , i.e. approx. 4.5 grams. 72 solidi yielded a Roman pound (0.325 kg) and 7200 solidi a Roman centenarium (32.5 kg). The average diameter of the solidus is approx. 20 mm.

Half and third solidi ( semisses and tremisses ) were coined parallel to the solidus . The semisses (ø 18 mm / 2.2 g) and tremisses (ø 15 mm / 1.5 g) were used in Constantinople until under Emperor Michael I (811 to 813) and in Syracuse until under Emperor Basil I (867 to 886) coined. On the other hand, pieces of 1 ½, 2 and more solidi, so-called multipla, are rare . On special occasions in late antiquity, multipla with a value of 36 or even 72 solidi were made in very small numbers , which the emperor distributed as gifts to high dignitaries.

The purchasing power of a late antique solidus was very high: in the 5th and 6th centuries the annual salary of a Roman soldier was 4 to 5 solidi ; therefore, most everyday transactions were made with smaller coins.

On the solidi of the 4th century, the emperors were still regularly depicted in the classic Roman style in profile, looking to the right and wearing a diadem. From the 5th century onwards, the rulers on the solidi were increasingly depicted as frontal or three-quarter frontal busts, often with helmets, armor and spear. However, it was not until the 7th century that profile representations became completely uncommon. The quality of the images has decreased significantly since the 5th century.

After the Suebi , Vandals , Ostrogoths , Visigoths , Franks , Burgundians and Anglo-Saxons took possession of Gallic, Spanish, Italian, British and North African areas as part of the so-called migration , the rulers of the Germanic successor empires continued to shape solidi and tremisses . However, since the minting of gold was considered an imperial privilege, they placed the image of the Western Roman Empire on the obverse of the coins until the end of the Western Roman Empire (476) and then - in some cases well into the 8th century - the image of the Eastern Roman Emperor recognized them nominally as overlords. In numismatics, these coins are referred to as pseudo-imperial .

In Ostrom, however, which was later also called Byzantium after the end of the Western Roman Empire (476) (the Byzantines saw and referred to themselves as Rhomaioi , i.e. Romans), the solidus lasted until the conquest of Constantinople (1453) .

In the 6th and 7th centuries, reduced solidi with special identification were issued. They are only 20, 22 or 23 siliquae in weight, with one siliqua being around 0.1875 grams. Their original purpose is controversial. Research associates them with tribute payments, with foreign trade or with the change in technical requirements for bronze money reforms.

In the 6th and 7th centuries, due to the civil and military independence of the Exarchate of Carthage and the Exarchate of Ravenna, the shape of the solidi in Carthage and Ravenna changed compared to those minted in Constantinople. In the 7th century, the Carthaginian solidi were minted with a diameter of 10 to 12 mm instead of the usual diameter of 20 to 22 mm, but with an extreme thickness, so that the standard weight of the solidus of around 4.5 g remained unchanged. In Ravenna, however, the solidi was struck with a very wide margin in the 6th century.

Arabo-Byzantine solidus (above) minted under the caliph Mu'awiya based on the model of a solidus of the emperor Herakleios .

After the conquest of Syria and Egypt by the Arabs, the first Umayyad caliph Mu'awiya (661–680) continued to mint solidi , although he had the crosses replaced by balls or bars. It was not until the coin reform of the fifth Umayyad caliph Abd al-Malik (685–705) in 696 that the solidus was replaced by the dinar .

Under Emperor Justinian II (685–695 and 705–711), Christ was first depicted on the front of the solidus . In the age of iconoclasm during the 8th and 9th centuries, the portrayal of Christ had to give way to simplified imperial portraits. Mostly deceased imperial predecessors and still living family members were depicted on the coins. As a result, a claim to rule could be dynastically legitimized. Or the same ruler appears, hardly varied, on the front and back. Since the depictions of Christ and Mary after iconoclasm claimed the entire front of the coin, the imperial portrait moved back to the reverse as under Justinian II. In the time of the Macedonian dynasty (867-1056) it was customary to show the ruler together with the co-ruler or the Mother of God.

Under Emperor Nikephoros II. Phokas (963–969) a gold coin with only 11/12 of the usual weight but the same gold content was issued in addition to the solidus . There are different opinions about the reason for the introduction of this coin, which is 1/12 lighter. According to the Byzantine historian Johannes Zonaras , the point of this change was in the (failed) attempt to get the market to accept the underweight coins at the value of the old solidus . The lighter coin was tetarteron called the full weight solidus was from this point ἱστάμενον νόμισμα (Hi) stamenon nomisma or short Histamenon called. The histamenone weighed between 4.4 and 4.5 g, the gold coin 1/12 lighter, the Tetarteron nomisma, between 4.0 and 4.05 g.

Some numismatists argued that the Tetarteron with the Fatimid dinar became convertible by a 1/12 weight reduction and should thus facilitate trade.

Under the reign of Emperor Constantine VIII (1025-1028), the two types of coins began to differ iconographically.

There are numerous hypotheses about the cause of this skypatic development, which is also characteristic of the Byzantine electron and trillion coins of the Middle Byzantine period.

Histameon of the emperor Alexios I Komnenos (1081–1118). Due to the hyperinflation, the gold content went to zero before the coin reform in 1092.

Under Alexios I, the already completely devalued histamenon and tetarteron were abolished as part of the coin reform of 1092 and a new gold coin with a gold content of initially 900 to 950 thousandths (21.6–22.8 carats) was introduced. This new coin was called Hyperpyron , weighed 4.5 g like the solidus and later had a fineness of 21 carats (alloy ratio of 21 parts gold to 3 parts other metal or 875/1000). Despite the lower gold content, the hyperpyron is classified as a late Byzantine solidus. The hyperpyron remained in circulation until the conquest of Constantinople (1453) , but lost its value due to the falling gold content. Under the dual rule of John V and John VI. (1347-1353) the hyperpyron was struck for the last time. This ends the Roman-Byzantine gold currency of the solidus, which has existed for more than a millennium since its introduction under Constantine the Great .

The last solidi were minted around the year 1350.

To mark quality, some solidi under Constantine and his sons were marked with the number LXXII on the lapel , which guaranteed that the weight was 1/72 of the Roman pound (approx. 325 grams), i.e. approx. Was 4.5 grams. From the end of the 4th to the beginning of the 8th century, the letters OB were embossed on the lapel of all solidi . OB had a double meaning: In the Greek number system , Omicron Beta stands for the number 72.On the other hand, OB also stands for ὄβρυζον Obryzon for pure gold or for obrussum aurum or obryzum aurum for the fire test of gold and thus for the gold purified by fire. After the fall of the western Roman half of the empire, OB was represented as CONOB in combination with the abbreviation CON . This information is not to be understood as an indication of the mint, but is a quality label and means Κωνσταντινοπόλεως Oβρύζον, which means something like: "The right standard of Constantinople".

Before the loss of the western half of the empire, solidi were minted in the following mints: Alexandria , Antioch , Aquileia , Arelate , Carthage , Constantinople , Cyzicus , Heraclea , Londinium , Lugdunum , Mediolanum , Nicomedia , Ravenna , Rome , Sirmium , Siscia , Thessalonica , Ticinum and Augusta Treverorum . There were also a few solidi mints that were only available for a short time. B. operated on for a usurper ( Ambianum under Magnentius , Barcino under Maximus etc.)

In the 7th century, the number of mints decreased drastically due to the loss of the Balkans to the Slavs , half of Italy to the Lombards, and Syria, Egypt and finally all of North Africa to the Arabs . In the east only Constantinople survived as the only mint, while the mints in the west only operated as long as they were in Byzantine hands (Carthage until 698, Ravenna until 751 and Syracuse until 878). The mint in Thessalonica was put back into operation in the 11th century, but did not have its own mint identification.

The Byzantine mints that minted Solidi were called Monetae aureae . The Monetae aureae of the provinces of Carthage, Ravenna and Syracuse were directly subordinate to the central financial administration in Constantinople. Solidi from the provinces can only be distinguished from those from Constantinople by their idiosyncratic, often very independent style and often by an almost expressionistic charm. However, by far the largest volume of Byzantine gold minting was always reserved for Constantinople. Gold was mostly minted only on direct order from the capital. The Monetae aureae were in turn divided into different workshops, Officinae. These officers put a mark on their coins, usually letters from the Greek alphabet, so that one could immediately see who was responsible for the minting. This countered the risk of fraud in the mints, such as the unlawful reduction in weight or fineness. In the Moneta aurea at Constantinople there were 10 officers who were marked with the first 10 letters of the alphabet. The dispensing information is usually at the end of the reverse legend. This variety of mints and offices was largely lost with the reduction in the size of the empire through the Islamic expansion after 700.

The name Solidus was long held for various monetary values. Finally, in the High Middle Ages, when the fineness and exchange value of the coin fell more and more, it switched to copper coins such as the Italian soldo , the Spanish sueldo and the French sol (later sou). In medieval documents , the shilling is often used with the Latin name solidus (see for example Mint Weimar, Brakteatenzeit , Sachsenpfennig - Münzfuß ).

The words sold , mercenary and soldier are also derived from the solidus . Balance , solid , solidaric and consolidate , on the other hand , are etymologically based on the Latin adjective solidus ("firm, reliable, truthful, whole, loyal"), not the name of the coin.