This article deals with the term “ dispensary” as a workshop and in connection with book printing and pharmacies. For the book publishers see: Offizin Zürich Verlag or Offizin Andersen Nexö Leipzig .

Offices in a pharmacy in Darmstadt , end of the 17th century: sales and accounting on the left, production in the middle and alchemy on the right

An Offizin [ ɔfiˈt͡siːn ] (from Latin officina "workshop, workroom", also "stove, farm building") has been a workshop that produced high-quality goods with an attached sales room since the late Middle Ages . The term has been used in different ways for book printers and pharmacies to this day. In numismatics , a mint is also referred to as an open shop. 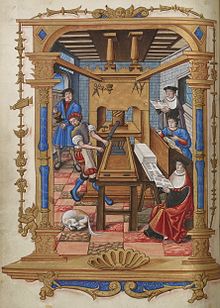 Book printer's office, 16th century: on the left the man with the leather balls for blackening the printing block, in the middle the printing process in the hand press ; the pressure is checked in the front right. Behind that is the typesetter in front of his raised table with the letters and the artwork, the drawer for the lines in his hand , behind him the chief of the shop. The heavy printing press is secured with beams and ceiling supports.

As a result of the great epidemics of the Middle Ages, especially the plague around 1350, the traveling drug dealers settled in the cities and increasingly had an officina . Although the production of the medicinal products has been relocated to the external laboratory over the centuries , the pharmacy has kept its sales area as its sales area, which according to Section 4 of the Pharmacy Operating Regulations in Germany must have access to public traffic areas and must be set up in such a way that the confidentiality of the Advice can be preserved. For a number of years there has been a further training occupation of specialist pharmacist for general pharmacy, which defines the field of activity of those working in the pharmacy in more detail.

Operated from the mid-15th century, the printer of the incunabulum time a officina or officin because the printer was not only the owner of a print shop , but at the same time publishers and booksellers . With the increasing specialization of authorship , publishing , production and distribution of books, the term disappeared along with the place it designated. Today it is mainly used in literature on the history of book printing .

Nevertheless, publishers or printing companies sometimes use the word in the company name up to the present day. Well-known examples are the Leipziger Offizin Drugulin , which has operated under the name Offizin Andersen Nexö Leipzig since its expropriation in 1953 (insolvency 2015), the Officina Serpentis , the Officina Bodoni or the Offizin Scheufele in Stuttgart, which has existed since 1808 . Also foundries Zinnfiguren firmieren occasionally in reference to the casting of the letters in the book printing as Offizin .

In numismatics, the term “ offizin” is also used as a synonym for an (ancient) mint . Especially when there were several mints in a city, the term “ Offizin” is used. These officers usually provided their coins with an `` Offizin '' symbol, e.g. B. When the solidus was minted in Constantinople with letters of the Greek alphabet, so that one could immediately see who was responsible for the minting. This countered the danger of fraud in the offices, such as the unlawful reduction in weight or fineness.

The term `` offizin '' has also become common for the pewter foundry.