The Roman system of measurement is based - like many pre-decimal metric measures - on the Nippur cubit and on the Mesopotamian , Egyptian and Greek systems.

It was basically valid throughout the Roman Empire , but it must be noted that on the one hand there were regional differences in the use of measures (e.g. the measure of leugen in the Gallic provinces) and on the other hand neither precise nor always available standard values. Even precision measurements with a high relative accuracy were therefore carried out with their own units, which may differ slightly from other precision measurements. Deviations from the expected values ​​(calculated using modern methods) are therefore completely normal, conversions into modern units of measurement as in the tables in this article can therefore only be approximate values ​​and are only for orientation.

The term “Roman foot” is actually anachronistic because this foot was already known to the ancient Egyptians as the Egyptian nippur foot 2000 years before Rome . In Greece it is called the Attic foot. 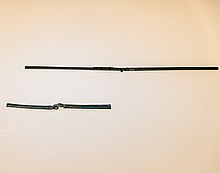 The metric dimensions given in the table are orientation values ​​and are mathematically based on a foot of 296 mm.

Note that the plural of the Roman mile is correctly milia passuum . Alternatively, the mile can also be referred to as "milestone", milliarium (plural milliaria ).
Statistically , the Roman foot is 296 mm long, but the measure actually used could differ by several mm due to inaccurate measuring methods and devices. Measurements of archaeological finds also seem to show a reduction to a size of 294.2 mm by the end of antiquity.
In Roman antiquity the foot was not represented by twelve, i.e. H. divided into inches, but practically all digiti, one-sixteenth of a foot.

The metric dimensions given in the table are orientation values ​​and are mathematically based on a foot of 296 mm.

The metric dimensions given in the table are orientation values ​​and are mathematically based on a foot of 296 mm, which results in a cubic foot of about 25.9 liters.

The amphora ("amphora quadrantal") corresponds to the cubic foot. The jug is two handspreads in cubic form, it contains exactly six sisters. Hence her name: Sester, a sixth Congius. With Amphora also an Italian volume measurement is called.

The metric dimensions given in the table are orientation values ​​and are mathematically based on a foot of 296 mm, which results in a cubic foot of about 25.9 liters.

The dimensions given in the table in metric units are orientation values ​​and relate arithmetically to the arbitrarily determined value of 47 milligrams for the Roman barley grain ; see below for attempts to determine the historical value (the Libra).

The weight of the Libra

Countless attempts have been made to pinpoint the historical value of the Roman Libra from the Renaissance to the present day .

In 1920, Lucien Naville claimed that a Roman Libra weighed only 322.56 grams, assuming a solidus (= 1/72 Libra) of exactly 4.48 grams. Rosati represented the same value in 1953. However, this value implies that the Romans would have to get their pound by dividing the Egyptian-Roman talent of exactly 26 kilograms first by 63, then again by 128, and then finally multiplying the result by 100. Or, which gives the same result: Talent through 80.64 - that is equal to the (later) Karl pound - through 2, through 63 [but why?], Times 100. A very cumbersome and therefore less likely path. Such a low value for the Roman Libra is not supported by anything else. That is why today such a light Roman Libra is no longer represented by anyone.

Nevertheless, today's historical metrologists largely agree that the Böckh value is probably too high. As early as 1960 Grierson wrote:
“Most reference works [continue] to assume the correctness of the value 327.45 grams for the Roman pound. Scholars are usually willing to do this for reasons of convenience (literally: "for the sake of convenience") , although at the same time they admit that this value is probably too high. "

The Szikáncs treasure found in Hungary in 1963 , which contains almost 1500 Roman solidi from late antiquity , supports a value less than approx. 327½ grams.

As early as 1690, François Le Blanc had such an average value. Also Soetbeer , 1858 and Guilhiermoz, 1906 came to the same conclusion. However, all three assumed the - in their opinion probably ideal * - value of exactly 6144 French grains, i.e. 6144 × (1 / 18.82715) equal to approx. 326.337 grams. In the last few decades, three other mean values ​​in particular have been represented: Exactly 324 grams by Crawford (1974), with the explicit reference to the good divisibility of this number. In 2004 the professional Belgian numismatist Jean Elsen suggested a value of 326 grams in a well-documented work . As early as 1973, Wolfgang Hahn calculated the value of 325 grams.

The latter, Hahn's value, appears appropriate because this value follows the path of the simplest, most reasonable derivation of the Greek mine. The Greeks therefore simply divided the Egyptian-Roman talent of almost exactly 26 kilograms by 60 to get to their mine. The Roman Libra is known to be ¾ the Greek mine.

The table above adopts Hahn's value in principle. However, since the decimally rounded value containing the prime number 13 results in : 325 g, a mathematical Roman grain of exactly 47.01967 592 grams, the simplified, 7-smooth value of precisely 47.04 mg was preferred for the Roman grain weight. The actual Hahn value is only 0.0432% below the seven-smooth. However, seven- even values do not claim that the Roman metrologists determined their grain weight to one hundredth of a milligram, nor that modern historical metrology today could determine this value with the same precision. Seven-even values ​​only represent a practical - but also clearly within the coefficient of variation determined for the respective dimension - over-all rounding of all, including the derived dimensions.

* In fine, Le Blanc, Soetbeer and Guilhiermoz were not at all wrong. However, they ignored the French weight point of 3136: 3125. Hence their not entirely correct value. (Cf. Karlspfund # French derivatives .)

The multiples of the ounce

All simple multiples of the Roman ounce have their own names.

One and a half ounces was called sescuncia by the Romans .

The Julian calendar with a year (annum) of 365 ¼ days (a leap year every 4 years, without exception) was introduced in 45 BC. Chr. Introduced.

The Roman surveyors were named Gromatici after their instrument , the groma . A Latin text "Gromatici veteres" from late antiquity, probably from the fifth century AD, gives the proportions of that time:

In this text from late antiquity, on the threshold of the Middle Ages, there are minor differences in the use of weights and measures compared to the classical period. However, the basic dimensions mentioned - both in almost all names and in their relationship to the other dimensions - have remained the same.