This article deals with the founder person. For other meanings, see Stifter (explanation of terms ) and Stifterl .

As a founder or Ktitor (in the Orthodox space from the ancient Greek κτήτωρ ) is called the founder of a pen or builder of a building or a place of worship ( donating figure ), later also someone who has given to the money. The founder sometimes appears in paintings since the Middle Ages, possibly with relatives.

Nowadays, a founder is someone who donates assets to a foundation or who contributes to an existing foundation ( donor , benefactor ). 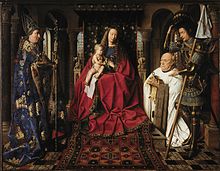 As so-called “ donor figures ”, clients for a church building or a piece of equipment in church art appear since early Christian times. Church donors are often given a model of a church as a gift. For example, the Empress Kunigunde is depicted at the Adam gate of Bamberg Cathedral . On church furnishings, donors usually appear praying, in the early Middle Ages they are often depicted in tiny small form next to the saints or Christ . This method of representation - as small figures arranged in one of the lower corners of the picture - remained until the end of the Middle Ages. From the 15th century, however, founders appeared in almost the same size as the saints depicted. On the Protestant altars of the Renaissance , donors are often depicted on the altar wings or on the predella .

In the 20th century, the religious connotation of the term was largely lost. Founders are now people who make significant property or assets available for charitable purposes. The general usage of language does not always differentiate between donations (long-term preservation of assets) and donations (real-time use of funds).

The foundations of settlements in the German language while both ecclesiastical foundations and secular significance: In addition to the early pen , start-ups to as the nucleus of both the border colonization as well as the mission to serve, this also includes the founding cities of the late Middle Ages or after the Turkish wars . The respective sovereign financed these projects as a "donor", who thereby earned services for his soul's salvation , but also financial services as a feudal lord .

Founder in the narrower, legal sense is someone who sets up a foundation with his assets . These can be natural persons as well as associations, companies or the state.

Traditionally, donors did not set up the foundations until they died by will . Nowadays, four out of five foundations are established during the founder's lifetime. A foundation is set up with part of the private assets, which is either managed entirely in-house , as is the case with the Bill & Melinda Gates Foundation , or managed as a private foundation for a specific purpose by an umbrella community such as the Cologne High School and Foundation Fund. The founder decides whether, after his death, his remaining property will pass into the foundation or be inherited in some other way.

According to a study by the Bertelsmann Foundation (Karsten Timmer: StifterStudie , 2005), a significant turnaround has taken place here in recent years: eight out of ten donors are already active during their lifetime. You set up the foundation as a platform for charitable work, the focus and content of which you can determine yourself.

English terms are donor , benefactor , founder and - as a founder of a trust fund - trustor .