Golgotha is a redirect to this article. Further meanings are listed under Golgotha ​​(disambiguation) .

Pilgrims on the hill, considered Golgotha, within today's Church of the Holy Sepulcher

Golgota (also: Golgotha or Golgotha ) is the name used today for a previously unidentified hill outside the Jerusalem of antiquity . According to the New Testament Gospels , it was there that Jesus of Nazareth was crucified .

In the Gospel of Mark the text reads literally: "And they carried him to the place of Golgotha, which translates as the place of the skull". Luke only writes that the place was called "the skull" and does not mention Golgotha. Matthew is close to Mark and explains that the hill was called both "Golgotha" and "Place of the Skull". John writes that the hill was called "the place of the skull," which means Golgotha in Hebrew . From the Gospels of Mark and especially of John and Luke it can be seen that for the evangelists Kρανίου [Τόπος] ("[place of the] skull [s]") was the actual name of the hill, and with Γολγοθα ("Golgotha") only the Aramaic translation of this name has been reproduced. Older Bible translations still translated true to the original: "and he went out to the place, carrying his cross himself, to the place called the place of the skull, which is called Golgotha ​​in Hebrew." Today's biblical research , however, accepts Γολγοθα no more than the Greek rendering of Aramaic translation of the actual name, but sees the name itself in Golgotha . Kρανίου Τόπος is subsequently interpreted as a pure explanation and the etymological meaning of skull height from Aramaic gûlgaltâ , which precedes the Hebrew gulgulet , is assumed for Golgotha .

The “place of the skull” had different meanings for the church fathers : Origen z. B. traces the name back to the skull of Adam supposedly buried there , Hieronymus to the skulls of the condemned, other authors to the shape of the hill.

Further information in the New Testament

The New Testament tells of the crucifixion of Jesus outside the city, but close to it. This corresponded to Roman custom and the Torah . According to Matthew and Mark ( Mt 27.39  EU ; Mk 15.29  EU ), Golgotha ​​was a place that many people passed, so perhaps a place that was on one of the main routes to Jerusalem, probably near a city gate. In the Gospel of John ( Jn 19.41  EU ) it is stated that there was a garden nearby. 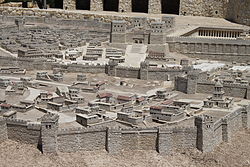 City model of ancient Jerusalem, Golgata in the center of the picture, behind it Antonia Castle .

Side view: today's church and reconstruction of the site at the time of the crucifixion (sketch)

Due to the garden mentioned by Johannes, a localization on the north side of the old city of Jerusalem would be most likely, since neither in the Hinnomtal in the south nor on the steep slopes in the east and west a garden near the ancient city wall could have been created. Thus the Church of the Holy Sepulcher is perhaps on the site of the biblical Golgotha. Helena , mother of the Roman emperor Constantine , had a basilica built on this site by Bishop Makarios I around 326 . According to the tradition of the time, this is where the crucifixion site and the tomb of Jesus were located, possibly according to a memory preserved in the Gospels. The remains of this basilica are under today's Church of the Holy Sepulcher. While the place is now within the medieval city walls, in ancient times it was north of the northwest corner of the city at that time. According to several early Christian pilgrimage reports, the hill of Golgotha ​​was a rock as high as a man, to which one climbed on steps. Around 385 a mighty cross, adorned with gold and precious stones, is said to have been on it, which the Roman Emperor Theodosius had set up right next to the Church of the Holy Sepulcher.

During restoration work and excavations in the Church of the Holy Sepulcher , it was found out from 1973 to 1978 that this site had originally been a quarry in which the white Meleke limestone was cut until the 1st century BC . What remained was an elongated, crescent-shaped stump about seven meters long, three meters wide and 4.80 meters high, which from the city may have looked like the top of a skull. In 1986, after a layer of lime had been removed, a ring with a diameter of 11.50 cm was found in the stone, which could have held a log up to 2.50 meters high. The localization of the grave and the place of execution within the area of ​​today's Church of the Holy Sepulcher, in conjunction with the sources and archaeological findings, appears to be entirely understandable and justified. A clear or unequivocal localization is not possible.

Another thesis identifies Golgotha ​​and the associated burial place on a rocky ridge north of today's Damascus Gate near the old town. A grave cave was discovered on its north-western slope in the 19th century, which is particularly venerated by the Protestant and Anglican communities as a so-called garden grave. The exclusion of Protestants from the Church of the Holy Sepulcher also played a role.

According to Theodor Heuss , "Golgatha" is one of the hills on which the West is based, next to the Acropolis and the Capitol .

The Swiss composer Frank Martin set the Passion of Jesus to music in the oratorio Golgotha .