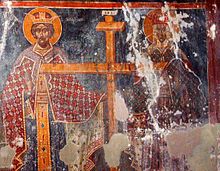 Constantine and Helena with the Holy Cross, wall painting, Berat , Albania, 2nd half of the 16th century 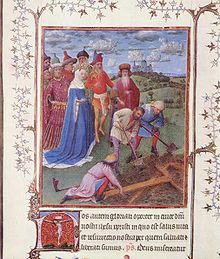 Jan van Eyck : Finding of the Cross of Christ by Empress Helena, Turin-Milan Book of Hours , around 1422

Holy Cross or True Cross of Christ is the name given to the cross on which Jesus Christ died the sacrificial death . This cross was allegedly found in 325, divided into several parts and taken to different locations. There are speculations about the size of the cross and its types of wood. In the Middle Ages there were a great number of relics of the true cross of Christ; these were among the most important Christian relics of all. They were kept in valuable reliquaries, the so-called staurotheques . Numerous Holy Cross churches all over Europe were built around these relics .

Feasts of the Holy Cross are Exaltation of the Cross on September 14th and some other movable feasts. The veneration of the cross takes place on Good Friday in celebration of the suffering and death of Christ . In the Orthodox churches there are several so-called cross processions during the church year . The day of the recovery is the feast of the discovery of the cross (May 3rd, only preserved in the extraordinary form of the Roman rite, March 6th or May 7th, Orthodox).

Three legends reported in different versions of the discovery of the Holy Cross by the rabbi Judas Cyriacus or by Helena. In addition, the holy nails and the holy grave are said to have been found again.

“In Jerusalem, a gold-plated box is shown containing a part of the Holy Cross; it is opened, the cross wood is lifted out and placed on the table together with the cross inscription. "

Sacred buildings to the Holy Cross

Particles of the Holy Cross are kept and venerated in many churches and monasteries . In German-speaking countries, for example

Cross particles in the Vienna treasury, part of the imperial regalia

In Byzantium and in the West, numerous reliquaries for relics of the true cross, storage archives , such as the Limburg storage archives or the reliquary of the True Cross in the Louvre, were created.

In the Pharos Palace Chapel in the Grand Palace in Constantinople , two larger pieces of the cross were kept until 1204.