The location of the Great Palace in ancient Constantinople.

Mosaic from the palace

Mosaic from the palace 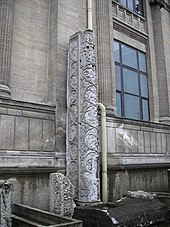 A pillar from the Grand Palace, now in the Istanbul Archaeological Museum

The Great Palace ( Latin Palatium Magnum ) (also Holy Palace ) in Constantinople was the seat of the Byzantine emperors from Theodosius II (408–450) . It was located on the hill next to the hippodrome near Hagia Sophia and covered an area of ​​approximately 100,000 square meters. It lay on six terraces, which bridged the 31 meters of altitude from Hagia Sophia to the coast of the Marmara Sea .

The most important source for the Grand Palace is " De cerimoniis aulae Byzantinae " by Constantine VII (913–959), who also used numerous older sources.

After damage from the Nika uprising (532), the Great Palace was rebuilt under Justinian I (527-565) and expanded especially under Theophilos (829-842). Since the 10th century, the emperors resided mainly in the Blachernen Palace near the land wall , and the Great Palace gradually fell into disrepair. 1204 , during the siege of Constantinople by the Latins , a number of distinguished ladies took refuge in Bukoleon , including the Dowager Empress Agnes, the sister of the King of France, and the Empress Maria, wife of Emperor Isaac II. , Daughter of the King of Hungary , the later to marry Baldwin I (1204–1205). The palace was captured and plundered by the Count of Montferrat . It is said to have contained great treasures, according to Gottfried von Villehardouin there were “no words to describe them and no one could count them in any way”. Heinrich von Flanders (1206–1216) married Empress Agnes in the Bukoleon Palace. The last Latin emperor, Baldwin II (1237–1261) had the lead torn from the roofs of the Great Palace and sold. They were not restored even under the paleologists . The Spanish ambassador Ruy González de Clavijo described the ruins in 1402.

After the conquest in 1453 , Mehmed II Fatih is said to have visited the Great Palace and, in view of the ruins, quoted the following lines from a Persian poem by Saadi : “The spider weaves the curtains in the palace of the Caesars, the owl calls out the hour from Afrasiab's towers. “After the conquest, the Nea basilica was looted and also left to decay.

Today there is hardly anything left of the Grand Palace. Parts of the Sultan Ahmed Mosque were built over. Only the restored remains of the so-called Magnaura near Hagia Sophia and the cisterns ( Yerebatan Sarnıcı ) are accessible.

The Grand Palace was very splendidly furnished, the audience rooms (Magnaura) were designed to impress and intimidate foreign dignitaries. The usual route for visitors led from the bronze chalke gate (vestibule) through the schola, excubita, consistory and onopodium to the three-aisled magnaura (reception room). Under Theophilos , a throne was built in here, which could be lifted up mechanically to the sound of an organ . Golden lions and griffins on either side of the throne opened their mouths and beaks and roared. Near the throne was a gilded plane tree with artificial birds that could move their wings and sing. In the Great Palace there was also the famous porphyry , lined with purple porphyry from Mons Porphyrites in Egypt , in which the imperial children were born as Porphyrogenetoi . Alexios IV had the statue of the Calydonian boar brought from the hippodrome to the palace.

The Grand Palace had access to the Sea of ​​Marmara through the Bukoleon Palace . There were also gardens and numerous churches on the palace grounds. Under Basil I , the largest Byzantine church was built in the palace after the construction of Hagia Sophia in the 6th century, the Nea Ekklēsia (described in the Vita Basilii), which became the first five - domed cross- domed church of Byzantine art. It was richly lined with porphyry and Sangarian marble and had two porphyry wells. Basil I also built the marble-clad Pharos palace chapel in the palace , which as the “Holy Chapel” was the most important reliquary of Christendom until 1204 and then through the robbery and sale of the Pharos relics, the building of the martyrdoms of the Sainte-Chapelle Louis IX. and the Chapel of the Holy Cross in Karlštejn Castle .

The Mesokepion garden, laid out under Basil I on the old Polo Square, was also located on one of the lower terraces in the eastern part of the palace grounds, but its exact location is unknown. He is described by Theophanes Continuatus . In order to arrange the garden, a number of private houses were demolished. The entire garden was surrounded by a wall and was artificially watered.

1935-1938 and 1952-1954 excavations were carried out by the Walker Trust. In the area east of the hippodrome, a hall with an apse (32 × 16.5 m) and a rectangular courtyard (65 × 55.5 m), which was surrounded by columns and contained magnificent mosaics , were found. These are now in situ in the Mosaic Museum. Eugenia Bolognesi Recchi-Franceschini carried out surveys for many years and was able to prove the Byzantine terracing. During the construction of the Eresin Crown Hotel on Küçük Ayasofya Caddesi in the early 1990s, cisterns, cellars and remains of floors were excavated. These are also parts of the palace (farm buildings?). The marble fragments found on the site are built into the hotel. Some of these are themselves (Roman) spolia . An excavation report does not exist. Excavations have been taking place east of Hagia Sophia under the direction of Alpay Pasinli since 1998, and parts of the Grand Palace were also uncovered. So far, 17,000 m² in the garden of the former Sultan Ahmet prison has been uncovered.