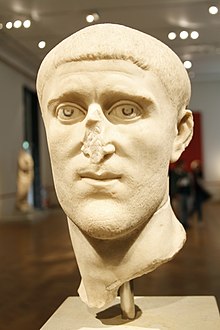 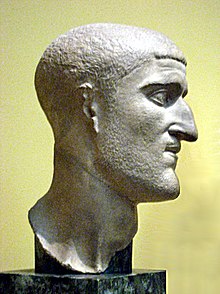 Completed copy of the bust from the Berlin Collection of Antiquities ( Pushkin Museum , Moscow)

Flavius ​​Valerius Constantius (not contemporary epithet Chlorus "the green, pale", short Constantius I ; * around 250, †  306 in Eboracum , today York ) was an emperor of the Roman tetrarchy . Initially subordinate to Caesar from 293 to 305 , he was Augustus in the western part of the empire in 305/306 . As emperor, he primarily ensured the end of the uprising in Britain and the reintegration of the British special empire under Carausius and Allectus . With his son Constantine he founded theConstantine dynasty .

Born in Illyria , Constantius made a career in the army. According to prevailing research opinion, it is a legend that he descended from Emperor Claudius Gothicus (268–270). It was probably only introduced into the world during the civil wars after his death, in order to increase the legitimacy of the Constantinian dynasty by adding an imperial ancestor. Indeed, Constantius probably came from a humble background and, like many Illyrian soldier emperors , had served himself high in the army. The first established fact in Constantius' life is his relationship with Helena . She came from a very humble background - Ambrose of Milan even claims that she was only one stall landlady was - why Constantius probably not married but in a long-term cohabiting lived with her. She gave birth to his first son, Konstantin, in the 270s . However, when Constantius got the opportunity to marry the emperor Maximian's stepdaughter , Theodora , in 289 , he left Helena and fathered other children with his new wife, including Julius Constantius , the father of the emperor Julian Apostata . At this time he was probably already Maximian's Praetorian prefect .

His nickname Chlorus appears for the first time in Byzantine sources, probably to distinguish it from his grandson Constantius II . If the impression given by the coin portraits and the imperial busts (which were not assigned to him with certainty) is correct, the initially gaunt man (with a characteristic hooked nose) had become obese towards the end of his life.

Gold coin Constantius I, minted in Trier (297–298), Constantinus in the legend erroneously . Depiction of the liberation of Londinium (inscribed as Lon ) and the province of Britain after the victory over Allectus (296). Transcription: Redditor lucis aeternae - " Restorer of Eternal Light".

On the back of this Argenteus , coined in Antioch under Caesar Constantius , the tetrarchs are shown in a sacrificial scene after the victory over the Sarmatians .

Constantius was adopted by Augustus Maximian and appointed under the tetrarchy on March 1, 293 as Caesar . The Gallic orator Eumenius acted as his private secretary at the time . Constantius is portrayed quite positively in the later sources. The late antique historian Eutropius wrote about the politics of Constantius:

"He was an extraordinary man of extraordinary kindness who cared about the welfare of the provinces and the common people instead of just pursuing the interests of the state budget."

Constantius' sphere of influence included Hispania , Gaul and Britain , although all of Britain and parts of northern Gaul were initially withdrawn from his rule by the revolt of the commander of the Classis Britannica , Carausius . Immediately after his accession to the throne, he managed to recapture the Gallic territories. This resulted in Carausius being murdered and replaced by Allectus . The reintegration of Britain into the empire, however, could not be accomplished by Constantius until three years later, because first a new fleet had to be built and equipped. In the meantime he defeated Franks in the mouth of the Rhine and settled them as colonies in Gaul. In 296 he finally crossed the English Channel with two naval divisions , one under his own, the other under the leadership of his Praetorian prefect Asclepiodotus . The latter managed to get past the British fleet unnoticed through the thick fog near the Isle of Wight and land undisturbed in Britain. Constantius, on the other hand, went off course and could only go ashore when Asclepiodotus had already defeated the opposing main force and killed Allectus.

Constantius won several more victories against the Teutons : He led another campaign against the Franks, during which he penetrated deep into their territory and resettled some of them to Gaul. In 298 the Alamanni attacked him near Langres , where he was wounded and first had to flee behind the city walls of the nearby civitas Andemattunum. A few hours later, however, a large relief army arrived, which then allegedly killed over 60,000 Alemanni. Shortly thereafter, Constantius defeated another German army at Vindonissa . With new fortifications, he secured the Rhine border from Mainz to Lake Constance against attacks by the Teutons.

The persecution of Christians that broke out in 303 apparently did not have the bloody character in Constantius' sphere of influence as in the rest of the empire. He limited himself to only dismissing them from the army; some churches were also destroyed, but allegedly there was no violence against people. This impression may also arise because the Christian sources later had no interest in counting the father of Constantine the Great among those who persecuted Christians; moreover, there seem to have been only a few Christians in his domain. In any case, it cannot be assumed that Constantius as Caesar would have openly opposed Diocletian's order to prosecute him; it is possible, however, that he carried it out with little zeal.

A later legend, on the other hand, is the assertion that he should have called Christians to his court or even adhered to Christianity himself. Constantius himself was not a Christian, but perhaps a henotheist . He was supposedly an avid worshiper of the sun god Sol . However, this view is primarily based on the version of the deification of Constantius by Sol presented in a Panegyricus of 307. However, this version of the apotheosis does not allow any reliable conclusions to be drawn about the actual worship of the sun god by Constantius, for which there is no other evidence, and is perhaps to be understood as an expression of the religious policy of Constantine the Great. He claimed for himself a special relationship with Sol until 312 (and beyond) before he favored Christianity, and possibly for this reason claimed that his father had already served this god.

In the opinion of many contemporary researchers, Constantius seems to have been more of a Hercules admirer. In addition to Hercules, who was closely associated with the tetrarchical ideology, Constantius was also associated with Mars, the god of war, during his lifetime . If this does not simply reflect the official religious policy of the first tetrarchy (which is conceivable), but actually allows conclusions to be drawn about the faith of Caesar , he was, like many Illyrian soldiers, a rather conservative follower of the traditional Roman gods.

After the resignation of Diocletian and Maximian on May 1, 305, Constantius and Galerius himself became Upper Emperor ( Augustus ) and apparently assumed the position of the ruler who had the last word in case of doubt ( senior Augustus ). In the same year he began a campaign against the Picts and Scots north of the Britannian Hadrian's Wall , in which his son Constantine accompanied him. As early as January 306 he was able to call himself "Britain Winner" again. In 306 (probably at the end of July) Constantius died in Eboracum (today's York ). He was buried a little later in a mausoleum in Trier ( Augusta Treverorum ) near today's St. Maximin Church. The British troops now proclaimed his son Constantine to be his successor; this happened possibly under the influence of the Alemannic prince Chrocus , who had served under Constantius. The rise of Constantine was the beginning of the end for the multi-imperial model devised by Diocletian, which did not provide for a dynastic succession to the throne, but which was popular with the troops. Whether Constantius himself dressed his son in purple on his death bed, as Eusebius of Caesarea later wrote, is unclear and controversial in research.

Constantius I is considered to be the founder of the Constantinian dynasty (until 363). He had lived with the landlady Helena for about 270 years , a marriage between the two is very unlikely (see above). Helena gave birth to Constantius a son, Constantine . In 289 or earlier, Constantius married Theodora , the stepdaughter of the tetrarch Maximian - a means of ensuring cohesion within the tetrarchy (see above). Theodora gave her husband a total of six children: the three sons Julius Constantius , Flavius ​​Dalmatius and Flavius ​​Hannibalianus and the daughters Constantia , Anastasia and Eutropia . This family history resulted in a certain division between the family branch of Helen or Constantine and that of the children of Theodoras. Even Julian , the son of Julius Constantius, accused Constantius II , the son of Constantine, not entirely unjustly, that he came from an illegitimate relationship, because his father was born out of wedlock and should therefore not have become emperor.

Commons : Constantius I.  - Album with pictures, videos and audio files