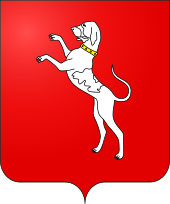 The Canossa were one of the most powerful families in early medieval Italy . They were among the leading dynasty families of the Italian nobility .

Their territory had been in the valleys of the Apennines since the first decades of the 10th century . The Emilia-Romagna , where the eponymous castle Canossa located, became the heartland of their rule, which in 1050 from Lake Garda on the Emilia-Romagna, the Markgrafschaft Tuscia down into the Duchy of Spoleto stretched in the middle of the Italian peninsula. The importance of the Canossa family emerged particularly during the investiture controversy. She died out with Mathilde von Canossa , the heiress of the Mathildic estates (1046–1115).

An unrelated family of the same name received the nobility privilege again in Mantua in the early modern period with the same coat of arms. That gender still exists.

The earliest tradition of the history of the House of Canossa mentions a Longobard prince Sigifredus of Canossa at the beginning of the 10th century, who owned fiefdoms in the Lucca area and extensive possessions in Lombardy. His son Goffredo was Bishop of Brescia from 970 to 976 and Bishop of Luni from 976 until his death in 998 . Sigifredus son Adalbert Atto von Canossa (* 939, † February 13, 988) succeeded his father and began to secure the property by building numerous castles, including the fortification of the rock of Canossa from 945 to 950. Since 984 he was referred to in the deeds as a margrave and received the counties of Parma , Piacenza , Bergamo , Cremona and Brescia as fiefs . Adalbert's marriage to Hildegard was the result of his son Thedaldo, who ruled from 988 until his death on May 8, 1012.

At the time of its greatest expansion around the year 1050, the dominion of those of Canossa extended from Lake Garda to Upper Lazio , including cities such as Mantua , Modena , Ferrara , Florence and Perugia . Today's Reggio nell'Emilia was the center of military power and thus of political events. In the course of a little over a century, the family had the bases on the roads from the Apennines to the Po Valley expanded in order to bring the most important trade routes between Italy and Central Europe and the Adriatic under their control. This strategy allowed the house to consolidate its position and was a source of its wealth and power. One of the most important bases was Canossa Castle in Canossa .

Boniface von Canossa (* 985, † May 6, 1052) was one of the most powerful nobles in Italy in the first half of the 10th century. He was the son of Theobald von Canossa, Count of Reggio , Modena , Mantua , Brescia and Ferrara . Boniface became Margrave of Tuscia around 1028/32 (as Boniface IV) and in 1051 Duke of Spoleto and Margrave of Camerino .

From Boniface's second marriage to Beatrix of Lorraine (* 1017, † April 18, 1076) came his daughter Mathilde von Canossa (* 1046, † July 24, 1115), who only became sole heir and ruler when she reached the age of majority. It was she who was able to successfully mediate in the investiture dispute between the Pope and the Emperor. Pope Gregory VII stayed at Canossa Castle under her protection. King Henry IV started his walk to Canossa here to have the ban on the Church lifted by the Pope.

Matilda left no direct heirs when she died in 1115. The house thus partially died out, and the possessions were lost over time. Some castles were held by the local lords and knights and mercenaries, while other properties went to distant relatives or came under papal rule.

The family crest shows an upright dog on a red background with a bone in its mouth. The coat of arms can be found in the municipal coat of arms of the village of Canossa .

These Canossa had several other possessions in addition to the ancestral castle .

Coat of arms of the Marchese Canossa (Mantua)

A later family with the name of Canossa, which came from Mantua and was not related to the original noble family of the Margraves of Tuszien, was granted the nobility privilege again with the same coat of arms. They were in the service of the noble Gonzaga family . Ludovico Canossa was Bishop of Tricarico from 1511 to 1516 . The family took on the title of nobility under Vincenzo I. Gonzaga , who gave the family the town of Calliano as a fief. Important representatives of this family were St. Magdalena Gabriela von Canossa (1774–1835), founder of the Congregation of the " Canossians ", and Cardinal Luigi di Canossa (1809–1900).

The second Canossa left behind some striking buildings: The Palazzo Canossa in Verona lies between the banks of the Adige and today's Via Cavour. Magdalena von Canossa was born there. In Mantua there is also another Palazzo Canossa , an important Renaissance building in the city. Simone di Canossa also acquired the Grezzano estate near Mozzecane in 1414 , where Carlo di Canossa had a large baroque summer palace built from 1769 to 1776; this was for sale in 2017. In 1900, through the marriage of Marchese Giuseppe di Canossa with Teresa de Reali, the Villa de Reali in Casier came to the Canossa family, to whom it still belongs.