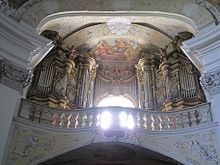 Vertical panorama of the interior of the Banz monastery church 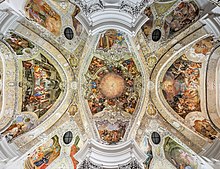 Banz Monastery is a former Benedictine abbey north of Bamberg and part of the municipality of Bad Staffelstein . The monastery belongs to the ensemble of the Gottesgarten in Obermainland and is currently owned by the CSU- affiliated Hanns Seidel Foundation . It serves as a conference venue .

The around 1070 by Countess Alberada of Schweinfurt and her husband, Count Hermann von Habsberg-Kastl , on the castle site of the former castle Banz founded Benedictine - Abbey was up to the secularization (opening on November 18, 1802 financial statements on 24 October 1803) the oldest monastery on the Upper Main. In the Middle Ages, the monastery owned the neighboring castle Stachilize, which was awarded to it by Bishop Otto von Bamberg in 1127 at the request of Abbot Baldewin . In the years from 1565 to 1568 there were disputes between the Duke of Saxony and the bishops of Würzburg and Bamberg over the monastery, which was occupied by armed men. The dispute culminated in 1568 with the departure of the entire convent and Abbot Georg von Henneberg, all of whom converted to Protestantism. Only seven years later, at the request of the Würzburg bishop, Banz was settled again, this time under the abbot Johann Burkhard, who was in office until 1598. With the resettlement, the rule that only nobles could be admitted as monks into the convent was abolished and reversed into its opposite.

After the Thirty Years War the monastery had to be rebuilt. The abbots Eucharius Weiner and Kilian Düring commissioned Leonhard Dientzenhofer and, after his death in 1707, his brother Johann . Construction began in 1698. In 1719 the church was consecrated . While the pilgrimage church Vierzehnheiligen (built 1743–1772, mainly by Balthasar Neumann ) on the other side of the Main is a rococo building of the highest order, the Dientzenhofer abbey church of Banz is a prime example of the southern German-Bohemian baroque at the beginning of the century.

In the second half of the 18th century, Banz Abbey enjoyed a nationwide reputation as a site of the Catholic Enlightenment and because of its learned monks.

The secularization began on 28 November 1802. In 1803, the acquired Electorate of Bavaria , the monastery administration. Some of the buildings were sold and demolished, and the abbey church became a parish church. The secularization was officially concluded on October 24, 1803. The Banz Office , the property of the monastery, was converted into the Banz Regional Court .

In 1814, Duke Wilhelm in Bavaria acquired the former monastery complex, which was subsequently referred to as "Schloss Banz" and was a summer residence. Duke Wilhelm hosted the King of Bavaria and the Tsarina of Russia, among others. The living rooms received a new equipment. The monastery crypt under the abbey church served as the burial place of the ducal family until 1883.

After the end of the First World War, the Wittelsbachers leased the property to the Trappists , who had been expelled from the Alsatian Abbey of Oelenberg and moved to Engelszell in 1925 .

In 1933, for a symbolic Reichsmark, the community of the holy angels , which was dedicated to pastoral care for Catholic Germans abroad, acquired the former monastery of Ludwig Wilhelm Herzog in Bavaria , while the land remained in the hands of Wittelsbach . From 1941, art and cultural assets were stored in the vaulted cellars. Between 1942 and 1945 the Wehrmacht used parts of the castle as a reserve hospital. From the summer of 1944, Banz was also the residence of Kurt von Behr , who was active in Reichsleiter Rosenberg's operations staff and had numerous art treasures deposited in the lowest cellar of the south wing of the palace. After the end of the Second World War, a large part of the monastery was set up as a Caritas retirement home for refugees and displaced persons . The nursing home was run by the school sisters of Our Lady (Bohemia) . In 1950 Banz had 324 inhabitants. In 1964, Caritas closed the old people's home.

In 1978 the Community of the Holy Angels donated the former monastery to the CSU- related Hanns Seidel Foundation . Since then it has served as a conference venue. It also houses a so-called petrefact collection , which also contains numerous other exhibits such as Egyptian mummies . The abbey church took over the local parish.

From 1987 to 2016, the two-day music festival Songs took place annually on a summer evening on the monastery meadows. The Festival Lieder auf Banz has been taking place instead since 2017 .

In his travel guide about Bamberg and the surrounding area from around 1912, the author Dietrich Amende also describes Banz Monastery:

"Scheffel described the whole magic of this gifted patch of earth in the" Monk of Banth ". Just as brother Nicodemus recovered from hypochondria and melancholy at the sight of the lovely wonders of the Franconian landscape, so do the many thousands who visit the Banzhöhe as a fountain of youth after everyday hardship and anger speak to him ...

However, it is not just the wonderful location in "beech-enclosed solitude" and the wonderful view - which can be enjoyed most beautifully from the castle terrace - that make Banz a top attraction. The extensive grounds of the former Benedictine monastery, which is now owned by the Bavarians. Ducal family are also architecturally extremely remarkable; they are built by the famous Franconian builders Leonhard Dientzenhofer and Balthasar Neumann. The commercial and administrative buildings surrounding the castle courtyard were built in 1752 according to Neumann's designs. Note the pretty rococo ornamentation of the entrance gate. The mighty main building is the work of Leonhard Dientzenhofer, built between 1698 and 1704, the builder of the Bamberg Residence. "

The monastery church of Banz bears the patronage of St. Dionysius and St. Petrus. The famous church, the foundation stone of which was laid in 1710, can be recognized from afar as a masterpiece thanks to the clever use of the landscape and the design of the exterior with a towering double tower facade. Like the Melk Benedictine Abbey over the Danube Valley, Banz dominates the Obermaintal on a correspondingly smaller scale.

The special importance of the monastery church, consecrated in 1719, lies in the interior design by Johann Dientzenhofer, who ingeniously took up spatial conditions and limitations. Although the church is not overly large, it shines with its special spatial effect. The interior is not angular, but designed with many "rocked" ellipses.

Inside the monastery church of St. Dionysius and St. Petrus, Dientzenhofer created a spatial impression through the curved wall surfaces interrupted by chapels and in particular through the formation of the vaults, which Richard Teufel described as follows:

“The interior, which appears dark under the organ gallery, leads between mighty pillars, under lively vaults, into clear depths. Domes seem to be lined up, walls bulge outwards, balconies penetrate inwards in opposite directions, belts rise diagonally into the vault. Under the 'main dome' is the mysterious center of the room, around which all the parts to which they are related are arranged; four chapel niches receive the electricity, give it meaning and direction to the high altar, through whose triumphal columns it swings further into the monks' choir. "

The main altar, the pulpit and the statues of saints in the church and on the facade are works by Balthasar Esterbauer created in 1721 ; the ceiling frescoes are by Melchior Steidl. The high altar, which, without the altar leaf, reveals the leaf of the choir altar, certainly goes back to an idea by Dientzenhofer. The choir stalls with rich inlaid fields were created by the Schönborn court carpenter and cabinet maker Johann Georg Neßfell .

The originally existing three organs, the main organ in the west gallery, the choir organ on the left side of the monk's choir and the winter choir organ in the small winter choir adjoining the monk's choir on the upper floor to the north, which is being converted into a museum room for the parish, are works by the Würzburg court organ maker Johann Philipp Sighs . Today there is a relocated work of Seuffert from the demolished minster of the Grafschaft monastery on the west gallery, built in and about a quarter completed by Gerald Woehl , Marburg. The winter choir organ, significantly changed in its historical substance by renovations in the 20th century, is in the branch church of Oberküps , municipality of Ebensfeld. The choir organ (summer choir organ) had served in the Laurentius Church in Ebersdorf until 1945 and then fell victim to a church fire. Today's organ above the monk's choir, used in the winter in the crypt in church services, was built by Thomas Eichfelder , Bamberg.