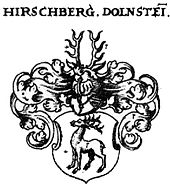 Coat of arms of the Counts of Hirschberg Dollnstein

The Counts of Grögling-Hirschberg , also Counts of Hirschberg , were a noble family from Upper Palatinate and Middle Franconia from the 12th to the beginning of the 14th century.

The origin of the count family cannot be determined with certainty. What is certain is that it first appeared under the name Grafen von Grögling , Dollnstein and Ottenburg ; zu Grögling ( Chregelingen ; near Dietfurt an der Altmühl on the Wasserburg Turmhügelburg Grögling ) the family sat around the year 1100, zu Dollnstein after 1139. Both Grögling and Dollnstein had received the noble family from the bishop of Eichstätt as a fief . It is not clear when the Lords of Grögling-Dollnstein received their (Hirschberger) county with the Untergauen Kelsgau , Rudmarsberg and Sulzgau , which had been separated from the margraviate of the Nordgau in 1004 , from the Kaiser. The Ottenburg nickname was taken from the county of Ottenburg around Glonn and Amper near Freising , which also belonged to them. The family took on the main name Hirschberg after having been resident at Hirschberg Castle on the northern Altmühlhang above Beilngries for more than three decades . The first mention is from 1205.

Representative of the sex

→ Master list: on the discussion page (due to uncertainties)

The original lords of Hirschberg (mentioned in documents in 1180, 1194 and 1196) have nothing to do with the noble family who called themselves Counts of Hirschberg from 1205 onwards. The latter probably built their castle there around this time instead of a previous building in order to better secure and better represent the Eichstättischen Vogteisitz and at the same time the seat of the Gugrafschaft. At the time of construction, a Hartwig from the dynasty of the Counts of Kreglingen-Tollnstein was Bishop of Eichstätt (1196-1223). He was a son of the Eichstatter monastery bailiff, Count Gerhard I. vom Kreglingen-Tollnstein. Hartwig's older brother Gebhard called himself Graf von Kreglingen-Tollnstein-Hirschberg. The younger brother Gerhard, on the other hand, bore the title of Count von Sulzbach .

Already in 1068 another Hartwig is named as Eichstättischer Vogt, who probably also belonged to the later count family; Whether he was Ernst's father, who is mentioned in a document in 1087 and occasionally called himself Count von Ottenburg, is uncertain. Ernst had a son named Altmann, who called himself von Grögling around 1098 .

Gebhard II , who was bishop of Eichstätt from 1125 to 1149, also came from the Chregelingen family; his father, the bailiff Count Ernst von Chreglingen from Eichstätt, also called himself Count von Ottenburg as the owner of the county around Amper and Glonn . Under Gebhard II his brother Ernst founded the Benedictine monastery in Plankstetten in 1129 . From Gebhard VI. von Hirschberg received a seal on a document dated February 28, 1253: the coat of arms shows a stag standing on a triangular shield. 50 years later the line died out with Gebhard VII.

The fact that Pope Viktor II († 1057) came from this dynasty of counts, as reported by an addendum in the Pontifical Gundekarianum from the 14th century , is now considered to be refuted.

Fight for the Hirschberg legacy

Gebhard VI., The last Count of Hirschberg, had a Countess Sophie von Oettingen as his wife. Even during his lifetime, when it became clear that there would be no (male) descendants, there were disputes about the future inheritance. Duke Rudolph of Bavaria - Gebhard's mother was a Duchess Sophie of Bavaria - asserted claims to his future estate because of his close relationship with him. However, Gebhard wanted the Eichstätt diocese as heir and had decreed this in two wills in 1291 and 1296. On September 8, 1304, he made a third will, in which he expressly used the Bishop of Eichstätt as heir to his county and the property connected with it, including the Hirschberg Castle and the Beilngries market. He died a year later, on March 4, 1305, and was buried in the Augustinian Canons of Rebdorf .

The battle for the inheritance, which now flared up between Bavaria and the Eichstätter bishop, was ended months later, on October 19, 1305, by a settlement concluded in Gaimersheim : The county of Hirschberg with its 122 towns fell to the diocese of Eichstätt , including Hirschberg and Beilngries, Kevenhüll , Kottingwörth , Ottmaring , Sulzkirchen , Erasbach , Raitenbuch and Forchheim , while the bishop renounced a large part of the inheritance in favor of an amicable settlement with the Wittelsbachers . The second ancestral castle Dollnstein came temporarily to the Oettinger family.

For the further history of the Hirschberg Castle see there.