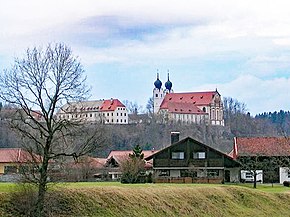 Baumburg Abbey as seen from Altenmarkt

Baumburg Abbey is a former Augustinian canons - pen in the northern district of Traunstein , which in the course of secularization was dissolved in 1,803th Today Baumburg is also a Catholic deanery , which includes the parishes of northern Chiemgau .

Count Berengar I von Sulzbach founded the monastery monastery of St. Margareth zu Baumburg around 1107/09 when he took a pledge in 1105 when his wife, Countess Adelheid von Frontenhausen died . Count Berengar I, under pressure from his numerous obligations, appointed Eberwin as provost of the monastery and provided him with those Augustinian canons whom he had previously appointed from the Rottenbuch monastery together with Eberwin to establish the Berchtesgaden monastery . He also transferred Berchtesgaden's goods to the new monastery. But at Berengar's request, Eberwin returned to Berchtesgaden around 1116 (according to Helm, between 1106 and 1112, according to Feulner, probably around 1116, according to Albrecht and Weinfurter between 1116 and mid-1119) to run it again as an independent monastery.

The regained “former freedom” of Berchtesgaden did not please the new and “first” provost of Baumburg Gottschalk (approx. 1120–1163) at all. He regarded Eberwin as a "renegade" and removed him from the provost list. In addition, he was not prepared to accept the loss of Berchtesgaden equipment. After Berengar's death (December 3, 1125), he challenged the legality of the separation of the two pens and turned to the responsible bishop, Archbishop Konrad I of Salzburg (1106–1147), for an order to merge them again. Only after an arbitration by Konrad in 1136 was the coexistence of the two pens in the sense of Berengar confirmed and confirmed again in 1142 by Pope Innocent II . The Baumburger demands, however, were rejected as "the opinion of certain simple-minded brothers".

During Gottschalk's tenure as provost of Baumburg Abbey (until 1163), a Nikolauskirche was consecrated in 1129 and the Romanesque basilica of St. Margareth was built by 1156 and consecrated on July 12, 1156 with the deposit of numerous relics by Archbishop Eberhard I of Salzburg . The founder Adelheid has been buried there ever since. Around this time, the Archbishop of Salzburg transferred an archdeaconate to the Baumburg provost . The provost thus acted as the archbishop's deputy for ecclesiastical jurisdiction, church supervision and asset management. In 1185 this function was confirmed by the Pope .

The monastery church of St. Margareta

The Augustinian canons worked primarily as pastors . The parishes in Baumburg-Altenmarkt , St. Georgen , Truchtlaching , Traunwalchen , Neuenchieming , Kienberg , Poing (today Truchtlaching) and Haberskirchen as well as possessions in Lower Austria belonged to the monastery . The monastery school, which was mainly attended by sons of the regional nobility , also gained importance . From 1367 the provosts were also given the right to lead an abbot's staff .

Like other monasteries, Baumburg also experienced religious and economic decline in the 15th century and especially during the Reformation . Baumburg was repeatedly placed under administration, among other things between 1536 and 1538 under that of the Berchtesgadener Stiftspropst and later Prince Provost Wolfgang II. Griesstätter zu Haslach . In addition, three fires devastated the monastery between 1523 and 1539, so that in 1579 only three canons lived in the monastery.

At the end of the 16th century, Baumburg developed new life again. As in the Middle Ages, the collegiate school enjoyed a good reputation among the nobility. The number of canons also increased again.

The baroque redesign of the former Gothic buildings of the monastery began around 1600 with a renovation of the medieval church. The tower ends were given their characteristic onion domes . The provosts Michael Doegger (r. 1688–1706) and Patricius Stöttner (r. 1707–1737) arranged for the monastery buildings to be rebuilt and rebuilt. On the occasion of the 600th anniversary of the consecration, the master builder Franz Alois Mayr from Trostberg built today's church of St. Margareta in the Rococo style with filigree stucco and frescoes .

In 1803 the monastery was abolished by the Bavarian state in the course of secularization . Until 1812 the monastery and farm buildings as well as the monastery-owned land were auctioned. From then on, the collegiate church served as the parish church of Altenmarkt an der Alz . Many of the monastery buildings were demolished. Since 1910, one wing of the complex has served as a vicarage. Another wing served as a rest home for the English ladies for a long time . Today there is a private seminar hotel there, which choirs and orchestras like to use. The Baumburg monastery brewery, founded in 1612, is now also privately owned.

The 48th degree of latitude runs through the monastery grounds , which is marked by positioned signs and is marketed accordingly in the wider community area.

(as far as known)