Themar is a country town in the Hildburghausen district in the Franconian south of Thuringia . It is the seat of the Feldstein administrative community and has also been a member of it since 2019.

Themar is located in southern Thuringia on the upper reaches of the Werra and in the foreland of the Thuringian Forest . In terms of traffic, Themar is located on federal road 89 and state roads 2628 and 2636. A railway line also runs through the country town.

To the south of the town of Tachbach there was a castle on the castle hill as a mansion. The strategically favorable dome was surrounded by a ring of wall and moat. Seven pits on the plateau suggest that buildings have been demolished. There are no structural remains, but the ring wall.

Themar was first mentioned in 796 as Tagamari . During the time of the tribal duchies, the place belonged to the Duchy of Franconia . Since the 11th century it belonged to the county of Henneberg , since 1200 it was the seat of a central court . The division of the county of Henneberg in 1274 affected Themar insofar as one half came to Henneberg-Schleusingen and the other half to Henneberg-Hartenberg. Division and later unification brought about the change of the bailiff's seat in the Themar office between Osterburg and Themar. 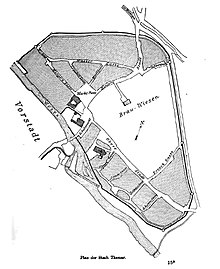 Upper tower - instead of vertical notches, wider horizontal windows were used between 1900 and 1983

In the north of the old town, in the area of ​​the “Bräu-Wiesen” around today's Anne Frank School, a high medieval castle of the Henneberger is located, which is calculated as the starting point for the first city fortifications. Initially, the settlement was fortified by walls and moats in combination with palisades. There were three city gates and a gate at the witch's tower. In 1317 Themar was given city rights. The erection of a fortified city wall with seven round towers was only approved by the Counts of Henneberg in 1457 and was erected from the 15th century. The defense towers are u. a. According to a more recent name, the bridge gate, the half tower, the witch tower, the upper tower, the castle tower, the western corner tower and the meadow tower. The urban area, which was developed according to plan, was divided into four quarters: the Oberstädter Viertel, the Brückenviertel, the Grabenviertel and the Marktviertel. Beyond the Werra was a suburban settlement with the mills and rock cellars. About one kilometer north of the city, the Weißbach desert was a further settlement complex, while the nearby Veßra monastery had a close economic and cultural relationship with Themar.

A Bartholomäus chapel has been occupied in the city complex since 1416; it is considered to be the predecessor of the city church begun in 1488. The upper church can be traced back to 1418. The city's economic heyday was from 1585 to 1620 and was brought about by the cloth making and timber trade (Werra rafting).

From the historic market square with the listed town hall, built between 1706 and 1711, and the market fountain (1894), you get to the shoe market with the administrative building, which was built in the style of the Henneberg-Franconian half-timbered building from 1665 with the Forntveste and ancillary buildings and renovated in 1995. In connection with the entire historical city ensemble, the office building is a listed building. To the south follows the bridge gate with the (wooden) Werra bridge. The town church was surrounded by a cemetery in the Middle Ages. The town's meat banks were on the east side, and the brewery was on the southern town wall, presumably with a gate to the banks of the Werra.

Themar participated in the witch hunt 1602–1697 . 19 women and five men got into witch trials . One man and eight women were executed, one died from torture. The Witches Tower on the west side of the city wall still reminds of this era.

In the Thirty Years War (1634) Themar was captured and sacked by the Croats , the town was set on fire by the retreating horsemen and most of the half-timbered houses and farms were destroyed. After the Counts of Henneberg died out , the city came together with the Themar office in 1660 to Saxe-Altenburg , which passed into Saxon-Gotha ownership in 1672 . After the division of 1680 it came to Sachsen-Römhild . After this line died out in 1710, the city was divided between Saxe-Gotha and Saxe-Coburg-Saalfeld . In 1826 it fell to Sachsen-Meiningen , which in 1920 became part of the state of Thuringia.

From 1940, 800 prisoners of war from the countries occupied by Germany as well as forced laborers, mainly from the Soviet Union and Poland, were employed in the lime works , in the August Möller , Wilhelm Stockmar , Julius Wilhelm , Alexander Schwarz , Greifzu & Co. wood factories and in the Julius Härter brickworks .

On April 6 and 7, 1945, the city was occupied by US troops . This was preceded by attacks by fighter bombers on the train station and the Obere Mühle, as well as artillery fire. The "Iron Bridge" over the Werra was blown up. The "New Citizens School" built in 1900 with an external library were destroyed (by phosphor shells from two US tanks), as well as some residential and factory buildings. Seven residents and seven Wehrmacht members lost their lives in the fighting.

In July 1945 the place, like all of Thuringia, was handed over by the US Army to the Red Army and thus part of the Soviet-occupied zone of the Soviet Zone , later of the GDR.

The city has the status of a district municipality .

The city ​​council in Themar consists of 14 council members plus the mayor and has been composed as follows since the local elections on May 26, 2019 :

For the 2019 local elections, the far-right Bündnis-Zukunft-Hildburghausen (BZH) entered the city council for the first time .

Peter Harenberg has been the city's mayor since June 2020.

His predecessor in office is Hubert Böse, who has been mayor since 2000 and was last re-elected in 2018.

Blazon : “In silver, a red high battlements wall with seven towers of different shapes behind it, at the gate there is a quartered golden shield, in the 1st and 4th field on a green three-hill a black hen; the 2nd and 3rd field divided: above a growing black double-headed eagle, below, a layer of silver and red. "

The oldest seal from the 15th century already contains a seven-tower wall, the gate point of which is occupied by the four-sided Henneberg coat of arms. The hen on the Dreiberg is the family coat of arms of the Hennebergers, the double-headed eagle above the slaughtered field characterizes them as imperial bailiffs and burgraves of Würzburg.

Themar maintains a partnership with Gerbrunn in the Würzburg district. 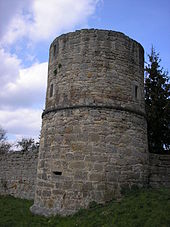 Remains of the city fortifications 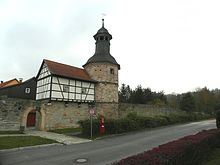 Themar is classified as a sub-center .

A sizable wood processing industry was already located in the city before the First World War, which was merged in 1965 to form VEB Südthüringer Möbelwerke in Themar, which was well-known beyond the district boundaries and was privatized again after 1990. Brickworks, a brewery, a paper mill and several quarries owned by local construction companies added to the town's economic base. During the GDR era, a large grain silo was built on the western edge of the city. 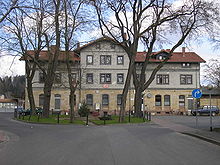 The city has a train station on the Werra Railway and is the destination of the Plaue – Themar railway line . The station is integrated into the route network of the Süd-Thüringen-Bahn , during the day Grimmenthal , Meiningen , Eisenach , Hildburghausen and Eisfeld can be reached every hour, and Sonneberg and Neuhaus am Rennweg every two hours . On the Plaue – Themar railway line, there are only special trips on public holidays between Themar and Rennsteig train station . The federal highway 89 runs through the city . A bypass road with a Werra bridge was created south of the old town to relieve traffic in the city center.

Themar is integrated into the WerraBus GmbH network for bus transport , so Schleusingen and the surrounding communities can be reached during the week .

In the vicinity of the district of Wachenbrunn there was a large transmission system for medium wave broadcasting until the end of 2013 . a. served to disseminate the Voice of Russia program. 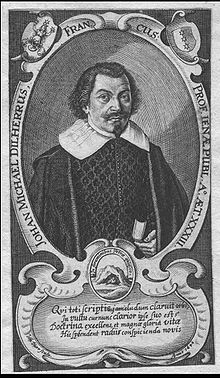 Cities and communities in the Hildburghausen district