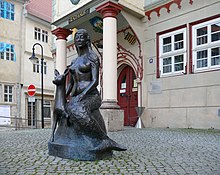 Slusia with deer in front of the town hall

Schleusingen is a Thuringian town on the southern slope of the Thuringian Forest in the Frankish coined Hildburghausen .

The town of Schleusingen in the Henneberger Land got its name from the river Schleuse , which runs south of the city center. The core city itself is located on the Nahe , a tributary of the lock. Coming from the north, the alder flows into the Nahe in Schleusingen. The 850 m high Adlersberg (Thuringian Forest) lies in the area of ​​the city.

In addition to the core city, the town of Schleusingen includes a further seventeen districts:

Schleusingen was first mentioned in a document in 1232 as villa Slusungen . Count Poppo VII von Henneberg had the Bertholdsburg built as an official seat and fortification in the period from 1226 to 1232. In 1274 the county of Henneberg was divided into three lines. The Bertholdsburg then became the residence of the Schleusinger line. Schleusingen experienced its first fire disaster in 1353, and other city fires in 1679, 1765, 1773 and 1876 destroyed entire districts.

Schleusingen received its town charter in 1412, but not market charter until 1533 . Count Wilhelm IV founded a barefoot monastery on the outskirts of the city in 1502 , which belonged to the Saxon Franciscan Province ( Saxonia ). During the unrest in the Peasants' War in spring 1525, the inmates, documents and valuables from the neighboring Veßra and Trostadt monasteries were brought to safety in Schleusingen and Bertholdsburg. The Reformation was introduced in 1544 . The aegidia chapel of St. John's Church was the burial place of the Counts of Henneberg and Elisabeth of Brandenburg in 1566 . The barefoot monastery, which was closed after the Reformation in 1545, became state property and was used as a school from 1560. This was inaugurated as a grammar school on June 7, 1577 and still exists today under the name Hennebergisches grammar school "Georg Ernst" . Schleusingen was the seat of the Counts of Henneburg until 1583. After the death of Count Georg Ernst , with whom his line died out in the male line, Schleusingen came to the Saxon dukes of the Ernestine and Albertine lines, initially under joint administration. From 1500 to 1806 Schleusingen belonged to the Franconian Empire .

From 1621 to 1622 there was a kipper mint in the city , in which interim coins (kipper coins) for Henneberg were struck under the mint master Barthel Eisendraht. These were cruiser pieces and so-called Kippertaler at 40 groschen.

Schleusingen gained economic importance through the influx of glassmakers from the Hessian Gläsnerbund and the Spessart . The rich wood stocks in the mountainous hinterland of the Thuringian Forest formed the basis of numerous glassworks and important Thuringian porcelain manufacturers until the 19th century . During the Thirty Years' War , when the first imperial troops arrived in 1634 , the city commander Ludwig Ernst Marschall was able to save the city from the plundering and destruction by the Croatians of the dreaded General Isolani with great negotiating skills . However, these used Schleusingen as winter quarters and moved down the Werra, pillaging and pillaging to the Kuppenrhön .

In the Saxon partition treaty of 1660, the town and office of Schleusingen fell to Sachsen-Zeitz . In 1709 the construction of a bathhouse at Wilhelmsbrunnen began. After the Sachsen-Zeitz line was extinguished, Schleusingen fell to the Electorate of Saxony . The St. John's Church was rebuilt in 1725. The town church was built in the baroque style.

From 1815 Schleusingen belonged to Prussia and in 1816 was raised to the district seat of the Schleusingen district. The art roads to Suhl, Hildburghausen, Burgstrasse, Königstrasse, Veßra Abbey and Ilmenau were built in 1817. The years 1846 and 1847 were years of severe famine. During the bourgeois revolution of 1848 there was a large popular assembly in Schleusingen and riots in the market. A road to Eisfeld was built in 1849. The grammar school was rebuilt from 1870 to 1874.

In 1888 the Schleusingen – Themar railway was built , the Rennsteigbahn to Ilmenau in 1904 and the Friedbergbahn to Suhl in 1911. Since the late 19th century, the city developed into a resort . In the 19th century the Jewish community had grown so much that it inaugurated a new synagogue in 1881 on the corner of Bertholdstrasse and Walchstrasse . It was destroyed by the Nazis during the November pogrom in 1938 , as a memorial plaque installed in 1988 commemorates. The 30 or so parishioners who remained in 1932 were driven into emigration or in 1942 deported to the extermination camps. The last burial took place in the Jewish cemetery in Judengrund in 1937.

During the Second World War , 1612 women and men, mainly from the Soviet Union and prisoners of war from the countries occupied by Germany, had to do forced labor : in agriculture and forestry, in drawing and stamping works , in the Adam Heinz Glashütte Friedrichswerk company , in the L. F. Ansorg company and in the railway maintenance office. A memorial in the cemetery on Ilmenauer Strasse commemorates 44 deceased inmates of the Römhild “ labor education camp ” .

The NPD repeatedly tried to gain a foothold in the town, but met with rejection from the citizens. The climax was in 2007 when an NPD functionary and neo-Nazi tried to join the Schleusingen volunteer fire department . The local fire department then submitted a list of 42 people who would leave in this case. The mayor rejected the request of the NPD functionary. This case of moral courage made the place known throughout Germany.

Population development of Schleusingen from 1791 to 2018

Development of the population (from 1960 on each December 31st) :

Schleusinger coat of arms on the town hall

The SPD, Left and Active form a common faction in the current city council.

For the 2019 local elections, the far-right Bündnis-Zukunft-Hildburghausen (BZH) entered the city council for the first time . The FDP candidacy was unsuccessful.

Blazon : “In blue, a growing silver gate castle made up of three round towers with red bell roofs, golden, padded, left-waving weather vanes, the flank towers joined in black halfway up, raised by black arched windows, the raised central tower with two low, black arched windows above a framed, open golden one Portal with a black, red-armored hen on a green three-mountain. "

Johann Ulrich Stähelin : Schleusinger market square with parade to the rifle festival in 1874

The Protestant Kreuzkirche is also worth seeing . The church is located in the north of the city at the cemetery. In 1454 a Heiligenkreuz chapel was built at this point, and in 1530 the cemetery was moved to this location. After it fell into disrepair after the Reformation, this Gottesackerkirche was built between 1600 and 1602, at that time with a small hexagonal tower with a death bell in the middle of the roof that had long since been dismantled. The organ from 1896 was expanded from 11 to 12 registers in 1949. The church was restored in the 2010s.

There is also the Hennebergische Gymnasium , founded in 1577 by Count Georg Ernst von Henneberg-Schleusingen , one of the oldest grammar schools in Germany.

Only a few kilometers south of the city center is the Ratscher dam , which was put into operation in 1983 and is used for flood protection and as a recreational area.

Remnants of the city fortifications are preserved in the form of pieces of wall and towers.

The largest cultural event is the annual castle and town festival with the historic Abitaufe on Saturday morning. All high school graduates of the year are driven in decorated handcarts through the city center to the Elisabeth Fountain on the market square, where they are released from school life with a personal saying and a lavish fountain water baptism. Previously it went to the municipal post office, where every high school graduate received a telegram with the words “Abi passed. Sends money! ”Sent home.

Hennebergisch , a Main Franconian dialect, is spoken in Schleusingen and the surrounding area .

The largest employers in Schleusingen, each with around 250 employees, are the Thuringia container glass factory (since the end of 2011 a factory of Wiegand-Glashüttenwerke GmbH ) and the Thuringian Forest Rehabilitation Center with several social institutions. A large number of jobs in the MEGA shopping center are concentrated in the shops there. There are also industrial areas and numerous smaller companies and service providers. Schleusingen also has several supermarkets and numerous shops in the city center. The former hospital, part of the regioMed clinics , has been converted into a care facility.
The city of Schleusingen has had the lowest trade tax assessment rate (328) in the Hildburghausen district since 2015. This was lowered to 300 for 2018. The commercial areas in the city are well used.

Schleusingen has had a motorway connection to the A 73 Suhl - Coburg - Nuremberg since 2006 , which has also been continuously accessible to the south since 2008. The L 3247 (formerly Bundesstraße 247 ) ends at the L 3004 (formerly B 4 ) at the Schleusingen motorway exit . The L 3004 connects Schleusingen with Ilmenau (about 22 km northeast) and with Eisfeld (15 km southeast) and takes over the to the north Function of an alternative route for dangerous goods trucks that are not allowed to pass the tunnel chain on the A 71 . The L3247 heads northeast and connects Schleusingen with Suhl / Zella-Mehlis (15 km northeast) and Oberhof (22 km north).

Schleusingen is a hub in the Werrabus GmbH network , which operates bus services in the Hildburghausen district . There are regular bus connections on lines 200 to Suhl and Hildburghausen (every hour on weekdays with increased frequency during rush hour, every two hours on weekends), 203 to Masserberg and 205 to Coburg . Other lines run at irregular intervals and without weekend traffic and the like. a. to Themar and Schleusingerneundorf .

In addition to the Schleusingen volunteer fire brigade as the base fire brigade of the Hildburghausen district, Schleusingen is also home to the rescue station of the Johanniter-Unfall-Hilfe eV regional association of Saalfeld-Südthüringen.

Districts of the city of Schleusingen

Cities and communities in the Hildburghausen district