Hella out of her mind 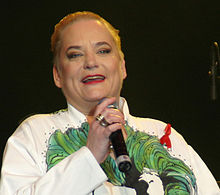 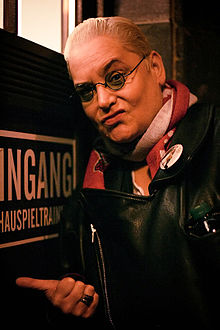 Hella Kemper (artist name von Sinnen) graduated from high school together with Jürgen Domian in 1977 , the two are still friends. She then studied theater, film and television studies , German language and literature and education in Cologne , but did not graduate. In 1979 she founded the cabaret group "Stinkmäuse" with Dada Stievermann and Dirk Bach . Her discoverer is the film and theater director Walter Bockmayer , in whose theater in the film can she was a member of the ensemble. In 1986 she played the nurse Rita in Rosa von Praunheim's film A Virus Knows No Morals , the first German film about AIDS .

She became known in 1988 through the RTLplus show Alles keine oder ?! , which she moderated together with Hugo Egon Balder . She stood out with every recording with a new and extravagant costume, which became her trademark at the time, as did her onomatopoeia "Tschacka-Tschacka", which lasted for a while. The costumes were designed and tailored by art students from Cologne. Her stage program I brake for men , with which she toured Germany's cabaret stages for two years, was also successful . In 1994 she played the part of the hyena Shenzi in the German version of the successful cartoon The Lion King , originally voiced by Whoopi Goldberg . Together with Dirk Bach, with whom she had lived in a shared apartment and was close friends, she dubbed some characters in Little Britain .

Hella von Sinnen was also a regular guest on Ralph Morgenstern's show Blond am Freitag on ZDF . From 2003 to 2010 she and Bernhard Hoëcker were part of the permanent advice team for the program Genial beseben - Die Comedy Arena by and with Hugo Egon Balder on Sat.1 . In 2005 she and others received the Golden Romy for the best program idea for this program. Although she and Balder see each other on the show and occasionally insult each other, the two are good friends. From 2011 to 2012 she hosted the clip show Klick-Stars on RTL 2 . In addition, von Sinnen was part of the permanent advice team for the RTL 2 show Stadt, Land ... - Promi Spezial in 2012 . In 2015 she was a regular guest on Hugo Egon Balder's new TV show Der Klügere Kippere nach Tele 5. The comeback to RTL came in 2016 with the TV show Die Kirmeskönige , which was hosted by Balder. With her own company Komikzentrum, Hella von Sinnen develops ideas for television.

In February 2017 von Sinnen was on the theater stage and played in Flaschko . Since March 2017, von Sinnen has been part of the advice team for the new edition of Genial beside it - The Comedy Arena on Sat.1. Since April 2017 she has been moderating the ComicTalk on the paid online portal Massengeschmack-TV .

For a long time, Hella von Sinnen was the partner of Cornelia Scheel , the daughter of Mildred Scheel and the adopted daughter of the former Federal President Walter Scheel . In 1992 they both took part in the “ Aktion Standesamt ” organized by the Lesbian and Gay Association in Germany (LSVD) , of which they are also members. From this engagement came the song Ja, ich will , produced together with the German band Rosenstolz , in whose video von Sinnen and Scheel contributed. Hella von Sinnen is significantly involved in the fight against discrimination against gays and lesbians and is involved in many projects, but stated in an interview in March 2017 that she was not politically active. She and Cornelia Scheel announced their separation in November 2015.

In 1990 the Federal Center for Health Education produced a commercial on the subject of Don't give AIDS a chance . Hella von Sinnen played a cashier in the supermarket and Ingolf Lück played an intimidated customer who tried to buy condoms inconspicuously . When it is the customer's turn, the saleswoman calls in a loud, piercing voice through the entire store: "Rita, what are the condoms cost?" The spot had to be resynchronized to “Tina, what do the condoms cost?” In order to avoid a possible reference to the former Minister of Health Rita Süssmuth .

as a member of the ensemble of Genial besides

Moderator / participant in a show