Older logo of the broadcaster

Radio Regenbogen is one of three private area broadcasters in Baden-Württemberg .

The station, based in Mannheim, has its official broadcasting area in the western part of the country, which includes most of Baden . However, it can also be received in neighboring areas of Württemberg , Hesse , the Palatinate , Alsace and Switzerland . The northernmost reception point extends to a maximum of Koblenz in Rhineland-Palatinate , the southernmost to approximately Lucerne in Switzerland. There are further studios in Freiburg and Karlsruhe . The managing director is Manuela Bleifuß.

The music format is called Adult Contemporary (AC) and the station Voices are Ole Jacobsen and Arlett Drexler . The current claim is We are from here . The morning show Die Vier von Hier is moderated by Tobias Gebhard, Daniel Ott, Cristina Klee and Frederic Heimann. According to a media analysis in 2011, Radio Regenbogen reached 219,000 listeners.

The media group Dr. Haas and the RTL Group since 2003 . Therefore, the RTL Group had to give up its stake in the station Hitradio RTL Karlsruhe , which was then called Hit1 and has been operating as Die neue Welle since January 1, 2007 . The station is a founding partner of the Popakademie Baden-Württemberg GmbH in Mannheim.

The transmission began on March 25, 1988 (6:00 a.m.) on the frequency 102.8 MHz with initially 10 kW transmission power from the Heidelberg transmitter only for the Rhine-Neckar area . The original start of broadcasting was planned for March 1st, but had to be postponed 13 hours before the planned start of broadcasting due to an interim order from the Stuttgart Administrative Court .

The choice of the name Radio Regenbogen goes back to a saying of the then managing director Klaus Schunk, who after a lengthy search for names of different agencies for the program like Radio Neufunkland or Rhein-Neckar-Welle with the not seriously meant comment “We can talk right away Call radio rainbow. ”Responded. However, once enthusiasm overcame this unusual name suggestion, it was actually adopted as the name for the new program.

In September 1991, the Black Forest Radio in Freiburg , which was launched on December 11, 1987, was taken over by Radio Regenbogen, which received its second transmission frequency 101.1 MHz from the Blauen transmitter. Freiburg initially continued to broadcast its own programs, but at the latest at the beginning of the new licensing period in Baden-Württemberg on October 1, 1994, with which Radio Regenbogen was licensed as a so-called "area broadcaster" in favor of a uniform Baden-wide program from Mannheim on regional news and regional jingles have been reduced.

On April 1, 1994, in anticipation of the new licensing period, Radio Regenbogen also took over the two broadcasters Radio Victoria and Radio Ladies First in Baden-Baden , who shared the broadcasting time on the 100.4 MHz frequency from Hornisgrinde. As a result, the transmission area reached the extent it is today.

For Radio Regenbogen, the 25 kW basic network transmitter frequency 107.5 MHz from the Mudau-Reisenbach transmitter in the Odenwald in Baden was also planned in 1994 . After a court ruling, however, this frequency had to be given to Süddeutscher Rundfunk by the Buchen broadcaster to broadcast its 4th program with the regional window from Mannheim (today SWR4 Baden-Württemberg with Kurpfalz-Radio) . Only in June 2004 was a filling station in the back of the Odenwald for Radio Regenbogen put into operation.

In 2007, the broadcaster took part in a field test for the test distribution of the program in analog-digital hybrid technology, the HD radio (IBOC for “in-band-on-channel”) widely used in the USA , in which the main program is in addition to the analog broadcast the same program in digital form plus the specialty programs Rainbow Gold and Rainbow Comedy were modulated on the same VHF frequencies . This project for the first broadcast on a European high-power transmitter was limited in time and part of a larger-scale project in Switzerland, where transmitters with lower radiated power had already been broadcast before .

From 2012 to 2014, the LiveRadio program was hosted by Radio Regenbogen in cooperation with the radio programs from Antenne 1 and Radio 7 .

Since June 30, 2016, the broadcaster has been operating the additional program Regenbogen 2 , which specializes in the greatest rock hits of the last five decades. For this purpose, the broadcaster has taken over the regional VHF transmission frequencies of the radio station sunshine live .

After 33 years working for Radio Regenbogen, Klaus Schunk left the management in 2020. 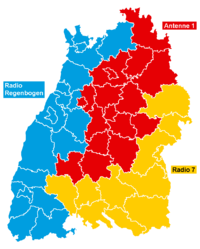 Due to the flat topography of Baden in the Rheingraben , a fairly large area is covered with the few frequencies thanks to the strong transmission power from exposed locations. Since December 1, 2014, Radio Regenbogen can also be received in large parts of Baden-Württemberg via DAB + on Channel 11B . Radio Regenbogen is also freely receivable via DVB-S (Astra 1H satellite) and worldwide via Internet radio.

Stefanie Heinzmann at the Arena of Pop 2009 in Mannheim

From 2006 to 2011, Radio Regenbogen hosted the major biennial open-air event, Arena of Pop, in the courtyard of Mannheim Palace . Continue to find the ball of stars as well as numerous "pop canteens" in which artists give small concerts in the canteen of the Mannheim Studios, continuously instead. The station has also been awarding the Radio Rainbow Award, The Media Prize from Baden-Württemberg since 1998 , which is always given to the most successful artists of the past year. From 1998 to 2004 this was presented in the Mannheim rose garden , from 2005 to 2012 the event took place in the Karlsruhe Black Forest Hall, and since 2013 in Europa-Park Rust. In addition, the broadcaster hosted the A Helping Hand donation gala , which in 2011 gave donations to children under the rainbow and Innocence in Danger .

This year the award was given for the first time, but still in a few categories. The years in brackets are the years in which the artist has rendered outstanding services.

The Radio Regenbogen Award 2015 was moderated by Thomas Hermanns

The Radio Regenbogen Award 2017 was moderated on April 7, 2017 by Thomas Hermanns

The moderator of the Radio Regenbogen Award 2018 was Atze Schröder .

The moderator of the Radio Regenbogen Award 2019 was Thomas Hermanns.