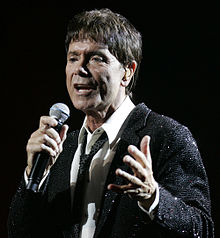 Sir Cliff Richard , OBE (* 14. October 1940 in Lucknow , India as Harry Rodger Webb ) is a British pop singer . In his long and varied career from the late 1950s to the present day, he has sold around 250 million records worldwide. In 1995 he became the first pop star of Queen Elizabeth II. To beat Knight . 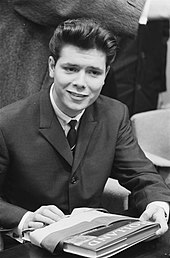 Richard was discovered by music producer Norrie Paramor in July 1958 and produced until October 1972. When he released his first single, Move It, on August 29, 1958 , he was one of many British musicians trying to get on the rock and roll bandwagon. In 1959 he had his first two No. 1 hits in Great Britain with Living Doll and Travellin 'Light .

In the first years of his career until 1969, Cliff was mainly accompanied by the Shadows . As an independent formation from 1960 to the end of the 1970s, they also had a number of top 10 successes in Great Britain. 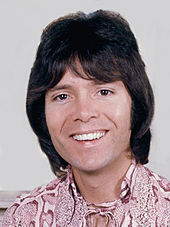 In the early 1960s he also sang many songs in other languages, because that was requested by the respective partners of his British record company. Japanese and German were the hardest for him. Richard had a total of three number 1 hits in Germany:One should kiss red lips ( Leiber / Stoller , German: Bradtke ) - the German version of Lucky Lips  - was on one for seven weeks from December 7, 1963; That is the question of all questions, (Original: Spanish Harlem ), from January 30, 1965 for four weeks and finally We Don't Talk Anymore from October 15, 1979 for five weeks (Great Britain number one and USA number seven).

His biggest hits include Dreamin ', Some People, My Pretty One, Miss You Nights, Mistletoe and Wine (UK Christmas number one hit 1988) and many more.

In 1996 Richard and Tim Rice produced a musical version of Emily Brontë's novel Wuthering Heights entitled Heathcliff and played the title role in it. The musical was performed in London and Birmingham in 1996 and 1997.

In December 1999, Cliff Richard had his 14th and so far last number 1 hit with Millennium Prayer . Having also topped the UK for all four previous decades, he can claim to be the only artist to have # 1 hits in five decades. So far, only Elvis Presley , The Beatles and Westlife have achieved more number one hits there . In the USA, however, Cliff Richard was never really able to gain a foothold. His biggest hit there was a number six in 1976 with Devil Woman.

In 2006, Cliff Richard broke another record: With the single 21st Century Christmas he climbed to number 2 in the British charts, making him the only artist in the world who had top ten hits for six consecutive decades. Cliff Richard is by far the most successful British artist alongside Elton John . He holds the attendance record in almost all concert halls in the kingdom. He has represented Great Britain twice in the Eurovision Song Contest . On April 6, 1968 , he took 2nd place with the song Congratulations (the winner was the Spanish singer Massiel with the song La La La ) and on April 7, 1973 with Power to All Our Friends, 3rd place.

With more than 250 million albums sold, Cliff Richard is one of the UK's most successful singers.

In November 2018 Richard released the album Rise Up , his first studio album with new songs in over 14 years.

Richard is a professed Christian . His songs include numerous Christian titles, and he published a book of 50 Bible Stories for Children. He also played the lead role in the Christian film Two a Penny in 1970 . He also took part in evangelism and performed with the American preacher Billy Graham . In his private life, he devotes himself to many charitable organizations, as he announced in an interview entitled Knight on the Crusade to Jesus .

The media have speculated about Richard's sexual orientation for decades. In his autobiography, published in 2008, he writes: “It annoys me as hell how the media speculate about my sexual orientation. Is it anyone's business? I think my fans wouldn't care anyway. ”In any case,“ sex isn't the driving force ”for him.

On August 14, 2014, the British police raided Cliff Richard's property in Sunningdale and announced that it was a "sexual nature" allegation from the 1980s involving a boy who was not yet 16 years old. Richard dismissed the allegations as "completely absurd". In 2016 the police stopped their investigations. 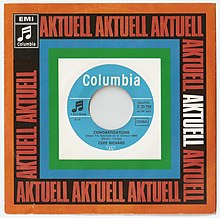 In 2001 Richard launched the first harvest from his winery in Portugal ( Algarve ). The red wine is called Vida Nova and is now also available as a rosé wine . This wine received the bronze medal at the International Wine Challenge in London - selected from over 9000 wines. All wines were blind tested by experts.

On the side, Cliff Richard sells his own perfume called Devil Woman.

During the cold season, Richard likes to stay in his villa on the island of Barbados , which he made available to former British Prime Minister Tony Blair on vacation.

In autumn 2006 he released the album Two's Company with half old (including with Elton John, Sarah Brightman and Olivia Newton-John) and the other half new (including with Anne Murray, Barry Gibb) duets.