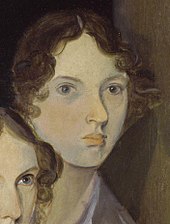 Emily Brontë in a painting by her brother Branwell

Emily Brontë was the younger sister of the writer Charlotte Brontë . In 1820 the Brontë family moved to Haworth, West Yorkshire , after Emily's father, Patrick Brontë, was offered the parish there. The family environment favored the development of Emily's literary talent.

As children, the four siblings Charlotte, Branwell , Emily and Anne created the fictional countries Angria, Gondal and Gaaldine, which they described in short stories. From Emily's work from this period nothing has survived except for a few poems ( The Brontë's Web of Childhood , Fannie Ratchford, 1941). Emily Brontë continued her lyrical work, which often referred to the dream kingdom of Gondal, until her death.

Emily Brontë attended boarding schools at Cowan Bridge and Roe Head with her sister Charlotte . In 1838 Emily Brontë worked as a teacher at Law Hill boarding school. In 1842 she went to Brussels with her sister Charlotte to study at Madame Heger's school. Emily returned to Haworth a few months before Charlotte, where she took care of the family household and finances. In addition to writing, which was initially a hobby for the siblings, Emily loved studying animals, hiking and observing nature, which were unusual interests for a woman in early Victorianism . Emily has been fluent in French since her stay in Brussels, and she also spoke Latin and ancient Greek, as can be seen from the translation work she has received.

In 1846 the three sisters Emily, Anne and Charlotte published the volume of poems Poems under the male pseudonyms Ellis, Acton and Currer Bell. The pseudonyms can be assigned to the first letters of the first name. The quality of the poems by "Ellis" (Emily) was mostly clearly emphasized by contemporary criticism compared to those of the two co-authors; a judgment that continues to this day and was also represented by Emily's sisters.

In 1847 Emily Brontë published her only novel Wuthering Heights , which is now considered a classic in English literature. The novel also appeared under the pseudonym Ellis Bell, it was published together with the novel Agnes Gray by her sister Anne. The writer insisted all her life on discretion about her identity and never gave up her pseudonym.

Emily is described by contemporary witnesses as an extremely reserved, stubborn and gruff personality, who lived very solitary and made no friendships, although she could be attractive despite her difficult manner, also because of her astute intelligence. Later interpreters of her life often find points of contact between Emily and the protagonist Heathcliff of her novel Wuthering Heights . Much like Heathcliff, Emily was often able to get her way in her family, even against her very self-confident sister Charlotte, and shocked household members with unconventional behavior.

Emily Brontë presumably died of tuberculosis or pneumonia in 1848 . The latter is now considered more likely because of the clinical picture described by Charlotte in letters; Charlotte also specifically wrote in a letter to her friend Ellen Nussey that Emily was suffering from pneumonia. Emily's persistent refusal to accept medical help and her desire to "let nature take its course" have become legendary: she refused to lie in bed until the day of her death and tried to carry on with her everyday life as usual. Charlotte describes Emily's death in letters as a "terrible spectacle".

In an essay ( Biographical Notice of Ellis and Acton Bell ) on the 1850 reissue of the novel, Charlotte portrayed her younger sister as a naive nature child who only supposedly knew what she was doing when she wrote the novel and invented a character like Heathcliff. With this, Charlotte created a legend about her sister, which was widely circulated: In many biographies, Emily is portrayed as a “unworldly pastor's daughter from the country”, but this is not an appropriate assessment of Emily's life for the social conditions at the time. In fact, she had gained more experience outside the home (teaching at a school, spending time abroad without her father being accompanied) than most women in the early Victorian middle class, who usually either went into marriage directly from home or never left their relatives.

The book tells of the tragic symbiotic love between Catherine, the daughter of the landowner Mr. Earnshaw, and the enigmatic foundling Heathcliff. This relationship drives Catherine mad and dead. But even after her death, the ghost of Catherine appears to Heathcliff; Heathcliff must share their fate in the end.
On the one hand, the ideal of romantic love is portrayed, which ultimately wins, even over the death of the two protagonists. On the other hand, the reader is shown the downside of love, which destroys several lives and affects others.

The book was first published in 1847 as a three-volume edition, with the third part - the novel Agnes Gray - being by Emily's sister Anne. In contrast to the reception of the volume of poetry and her sister Charlotte's first novel Jane Eyre , Emily Brontë's novel was judged less favorably by the critics; the rejection of conventional moral concepts developed in the book was too obvious. However, with approx. 500 copies of the first edition sold, the work achieved very good sales figures for the time, which also explains the numerous reviews for a debut novel that appeared soon after its publication.

When it became known that the Brontë pseudonyms were hiding three young women, the unbridled ferocity of some of the characters and the unusual brutality of the plot attracted even more attention and did nothing to improve Emily Brontë's reputation. What irritated readers at the time was that, with the protagonist Heathcliff, for the first time in Victorian literature, a character portrayed as malicious became the hero of a novel.

The narrative technique of the novel has “modernist features”: the tragedy between Cathy and Heathcliff is not told by an omniscient narrator, but by two very different observers from the first-person perspective. At this level there is a relativization of one-sided moral interpretations, despite the obvious doubtfulness of the characters presented.