Evangelism or evangelization (more commonly used in the Catholic area) describes the spread of the gospel of Jesus Christ . It can be used for the purposes of proselytizing non-performance or other faiths are operated based on the conversion ( conversion ) and baptism aims of the addressee, as well as in terms of catechesis to revitalize or reawakening of faith already baptized Christians.

In a narrower understanding of the term, the expression evangelism is often used in evangelical and evangelical circles as a term for more or less elaborate preaching events, which are primarily aimed at those who are distant from the church and non-Christians. The forms of these evangelizations, the history of which goes back to the 18th century, are many; they range from large evangelism to evangelism weeks in church rooms and tent evangelism through to so-called evangelistic street work and personal evangelism .

The theological basis of evangelism (in the broader as well as in the narrower sense) is the so-called missionary command of Jesus, with which the disciples are called upon to go out into all the world and preach the good news .

The term is derived from the New Testament ( Greek : εὐαγγέλιον ) gospel and means to acquaint people with the gospel of Jesus Christ and to invite them to a personal decision of faith. Preachers who appear at evangelism are called evangelists .

The forerunners of the modern evangelization movement include Bernhard von Clairvaux (1091–1165), Petrus Waldes (1179–1218), Berthold von Regensburg († 1272), John Wycliff (1320–1384) and the brothers from living together . Above all, the Reformation and Counter-Reformation produced a large number of publishers who worked in an evangelistic way outside of their own church fellowship and in some cases initiated large spiritual movements. Representing the many preachers here are the Lutheran Johannes Brenz (1499–1570), the "traveling evangelist" Kaspar Schwenkfeld (1489–1561) and the Baptist Balthasar Hubmeier (1485–1528). 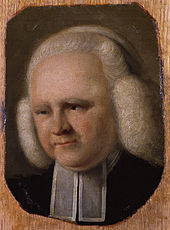 A significant date for the emergence of the evangelistic movement in the Anglo-Saxon area is February 17, 1739. George Whitefield , who is considered one of the first evangelists in the modern sense, preached on this day in the open air in Kingswood near Bristol to church-distant miners. The success of this evangelism led him to travel as a itinerant evangelist ( traveling evangelist ) first through England and later through Scotland , Ireland and the North American states. Here he came across Jonathan Edwards and the revival that began in 1734 under his effectiveness and motivated many followers of this movement to evangelistic service. John Wesley , the founder of the Methodist movement, worked closely with him . When hundreds of thousands embarked on the Great Migration West in the American pioneering period (1792–1825), they were followed by Baptist and Methodist lay evangelists, whose evangelistic work around 1800 gave rise to a new revival movement.

Early Pietism already gave significant impetus for the development of evangelism work in Germany . The actual birth of modern evangelism is, however, dated here at the beginning of the 19th century. During this time pietism and the Anglo-Saxon revival movement met . Numerous evangelists and evangelistic initiatives emerged from this encounter, some of the aftermaths of which can be seen up to the present day. The starting points for evangelical evangelism work in the German-speaking area were initially limited geographically to the so-called revival areas . In the period that followed, institutions and works emerged in these regions, the effects of which went far beyond the boundaries of the awakening areas and also crossed national borders. These works include the Evangelical Society for Germany (1848) and the German Association for Evangelical Community Care and Evangelism, founded in 1897 . In this context, the establishment of evangelistic schools must also be mentioned - for example in Chrischona near Basel (around 1841) and the Johanneum in Wuppertal (around 1886). The vocational missions set up in the 19th century also had an evangelistic purpose. Its addressees were the working people who had been uprooted by industrialization and who had distanced themselves from the church.

Evangelism was also carried out by the Free Churches , which were still young in the German-speaking countries at that time . Among them were the Baptists , Methodists, and Adventists , among others .

The non-denominational preacher Elias Schrenk (1831–1913) was one of the important German-speaking evangelists of this time . His role models, mostly non-theologians, came from England and America. They included lawyer Charles Grandison Finney and shoe salesman Dwight Lyman Moody , who has reached millions in his 40 years as a travel evangelist.

In the middle of the 20th century, Billy Graham , Oral Roberts and William Branham in particular became known through mass evangelizations. While Billy Graham worked primarily with non-charismatic churches and congregations, Roberts and Branham were leaders of the Pentecostal healing revival.

In Germany, the German Tent Mission has carried out major evangelistic events since the Second World War . Likewise the Janz team founded in 1954 . Today in Germany Reinhard Bonnke , Andreas Huebner , Wilhelm Pahls and Ulrich Parzany are known as preachers at major events, some of which focus on Africa . Evangelist Bonnke brings together an extraordinary number of visitors at evangelism events in Africa, in Nigeria (West Africa) the million mark was exceeded for the first time.

In Germany, interdenominational mass evangelism has been taking place regularly since 1993 under the name ProChrist , the central event of which is now broadcast via satellite to over 1,300 venues in 18 European countries.

The successes of evangelistic work in the Anglo-Saxon and German-speaking pietistic and free church areas also led to a rethink in the regional churches, which were largely characterized by orthodoxy and the Enlightenment. Already in the revolutionary year of 1848 and one year later in a memorandum, Johann Hinrich Wichern had demanded: "The Gospel must be preached from the roofs again, it must be freely offered and praised in the markets and streets [...] as it were at the gates the orderly church! " However, these demands were only implemented within the Protestant regional churches after the First World War through the establishment of the Church People's Mission .

From the middle of the 20th century, the American evangelist and Baptist pastor Billy Graham carried out large-scale evangelism in which millions of people were reached using modern technology. The major evangelism of Billy Graham in Berlin in 1963 and the multi-day evangelism event Euro '70, which was broadcast from Dortmund's Westfalenhalle to many places, were of great importance for the further development of evangelism in German-speaking countries . The Berlin evangelism became the impetus for the convening of the world congress for evangelism , which took place in West Berlin from October 26th to November 4th, 1966 and was attended by over 1200 visitors from over 100 nations. It is considered the first world conference on evangelism . The Euro '70 with its successor events became the nucleus of ProChrist. This interdenominational major evangelistic event has been taking place regularly since 1993 and is now broadcast from a central location in 1,300 venues in 18 countries. As the successor to Billy Graham evangelized here the national church pastor Ulrich Parzany.

It can be observed that in the last decades of the 20th century ever larger evangelism events take place worldwide. In January 2005 , for example, there was a three-day event in India where more than 7 million people came together for three events.

Organizer and practice of evangelistic events

Evangelizing churches, communities and so-called free works call themselves to a. to the so-called missionary command of Jesus Christ. The sermon , which leads to a call to conversion , is a typical core element of every evangelism event .

Evangelism occasions take place in churches and community rooms, more often non-church venues are deliberately chosen, e.g. B. City halls, sports stadiums, and large tents (see Tent Evangelism ). A special form are television evangelism , in which a centrally produced program is broadcast via satellite to meetinghouses and youth centers. These include mass evangelizations such as ProChrist and JesusHouse .

Another form of evangelistic practice is street evangelism , in which beliefs are to be conveyed in public spaces through short sermons, music and creative cabaret (e.g. street theater, pantomime, etc.).

The professional missions as well as a large number of smaller and larger evangelistic organizations, which are aimed at special groups of interested parties, are oriented towards special target groups . Some examples are mentioned here to show the broad spectrum of this evangelistic work: Christian model railroaders (cmt) , kite surfers eternal kite , breakfast meetings for women eV and the Christian motorcycle club Bible Biker .

In addition to the evangelistic events mentioned, so-called personal evangelism or friendship evangelism is of particular importance in the evangelical field . Special courses and literature are intended to motivate and guide people to bring the Christian faith to the fore in everyday encounters and networks of relationships.

The international and evangelistic alpha course is also very popular .