Marta Jandová (bourgeois Marta Verner , born April 13, 1974 in Prague , Czechoslovakia ) is a Czech musician . She became known as the singer of the group Die Happy and through some appearances with other bands.

Jandová is the daughter of the Czech musician Petr Janda , the solo guitarist and singer of the group Olympic , which is one of the first and most famous groups on the Czech rock scene.

In September 1993 Jandová came to Ulm . Although she did not speak German yet, a few days after her arrival she was asked by the guitarist Thorsten Mewes to sing in a new band. Just a few months later, in March 1994, Die Happy , in which she has been the front woman and lead singer at the same time, made her first appearance. Jandová was married to her colleague Mewes until 1998, mainly to secure her residence permit, as she herself states. She lived with him and his family for twelve years in Westerstetten near Ulm. From 2003 to 2008 she was in a relationship with the German pop singer Sasha .

In addition to Die Happy, Jandová is also active as a solo artist. On February 12, 2005, she competed in the Bundesvision Song Contest organized by Stefan Raab together with the Finnish metal cellists from Apocalyptica for Baden-Württemberg and took fifth place with the title How Far . She took part again in the Bundesvision Song Contest 2007 and won, this time together with Oomph! , for Lower Saxony with the title are you dreaming? She can also be heard in the songs Kalter Glanz und Gewissen from the album Kalter Glanz by the band last instance .

After she moved back to her hometown Prague in 2008, she performed there in the musical Mona Lisa . She also participated in the single Halt dich an mir fest by Revolverheld , which was released on November 19, 2010. From November 2009 to November 2010, Jandová presented the program neoMusic on the TV station ZDFneo . In 2010 she was a member of the jury in the ninth season of the German casting show Popstars on ProSieben . On May 20, 2011, the German Football Association announced that Jandová would sing the official DFB women's World Cup song entitled Sister Hit the Goal . 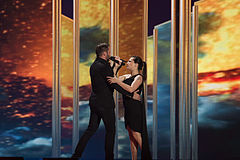 Jandová has been married to the Czech gynecologist Miroslav Verner since June 2014. The daughter of the two was born on August 7, 2013.

Together with the singer Václav Noid Bárta , Jandová represented the Czech Republic at the Eurovision Song Contest 2015 with the song Hope Never Dies . However, they failed to qualify for the final.

As a solo artist