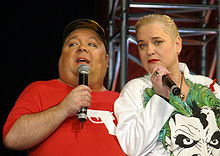 The son of the brass engineer and local researcher Willi Bach and the clerk Trude Bach, who both were employed by the WDR and lived in a house in Cologne-Heimersdorf , came into contact with museums and the theater early on. Dirk Bach, who did not attend a drama school, got his first theater role in 1978 from Cologne director Hansgünther Heyme in Heiner Müller's Prometheus . In 1980 he finished his schooling, in which he not thrice displaced had been at the Comprehensive School Cologne-Chorweiler with the average maturity .

Bach gained his stage experience in student theaters , the off-theater scene and in several independent theater groups. These took him to Amsterdam , Brussels , London , New York City , Utrecht and Vienna, among others . In 1985 Bach received the Max Ophüls Award . In the mid-1980s he appeared in Walter Bockmayer's play Geierwally , which was his breakthrough as a comedian. In 1988 he got an engagement at the Springmaus improvisation theater . In 1992 he became a permanent member of the Cologne Schauspielhaus ensemble . Dirk Bach was at home in both comic and serious theater subjects.

From 2000 to 2007 Bach performed as "Pepe" on Sesame Street . He was a spokesperson in the cartoon series Oggy and the Cockroaches and gave his voice to the characters in the series Tom and the strawberry jam bread with honey . Bach read works by Walter Moers , Terry Pratchett and Franz Kafka in various audio books , as well as children's books such as Urmel aus dem Eis by Max Kruse . He lent u. a. Captain Sharky also got his voice in the radio play series of the same name.

From 2004 to 2012 he hosted the RTL program Ich bin ein Star - Get me out of here with Sonja Zietlow ! . At Christmas 2005, Sat.1 broadcast a film adaptation of Urmel aus dem Eis with Dirk Bach in the lead role as Urmel. From 2006 to 2008 he was the director of the improvisation comedy Frei Schnauze XXL on RTL. Dirk Bach took part in the improvisation comedy Schillerstraße on Sat.1 in 2004, 2005 and 2009.

In April and May 2008, Dirk Bach hosted the Power of 10 show on VOX . From May to June 2008, after a lengthy abstinence from the stage, Bach performed the comedy Sein oder nicht sein , a play based on the film of the same name by Ernst Lubitsch , on the stage of the Millowitsch Theater in Cologne. In 2009 he hosted the program Einfach Bach on Sat.1. In the summer of 2010 he was part of the ensemble of the Worms Nibelung Festival . In many of his productions he worked closely with Hella von Sinnen , whom he knew from when they shared a flat in Cologne. In 2012 he rehearsed in the Schlosspark Theater Berlin for the play The Little King December , in which he was to play the leading role from October 6th.

Bach had known his partner, a computer specialist, since 1995. Their marriage in Key West in 1999 was not legally valid in Germany. Bach advocated equal rights for homosexuals. So he took part in the EinszuEins campaign of the lesbian and gay association in Germany , of which he was a member.

Bach supported Amnesty International and the organization PETA , from which he received the 2001 Humanitarian Award . In 2008 he received the Reminders Day Award for his commitment in the fight against HIV and AIDS . In 2007, Bach was the godfather of the German Children's Prize .

Dirk Bach was an honorary member and advisory board member of AIDS-Hilfe Köln, he was one of the greatest donors of the Lebenshaus Foundation . His “ Cover me ” benefit concert series raised around 350,000 euros for a good cause in ten years. The "Lebenshaus", a hospice for AIDS patients in Cologne-Longerich , inaugurated in 1996 by Rita Süssmuth and Dirk Bach , was renamed "Dirk Bach House" in 2013 in memory of Dirk Bach. 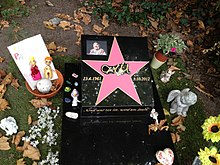 Dirk Bach's grave in the Melaten cemetery in Cologne

On October 1, 2012, Bach was found dead in his apartment in the Clipper Garden Home Berlin hotel in Berlin-Lichterfelde . The Berlin public prosecutor said that Bach had been treated for heart problems and likely died of heart failure. Medicines for high blood pressure and heart failure as well as cholesterol-lowering drugs were found in his apartment . Bach was alone in the apartment at the time of his death and there is no evidence of a death caused by third parties. On October 7, 2012, Bach's urn was buried in close family and friends in the Melaten cemetery (Litera C 14 J) in Cologne-Lindenthal .

Since 2014, the sculpture of the German Comedy Prize for “Best Moderation” in the RTL program Ich bin ein Star - Get me out of here has been on Bach's grave site ! The award, repainted in pink, is in a glass case on a pedestal next to Bach's grave. In 2013 his co-presenter of the show, Sonja Zietlow , and his successor Daniel Hartwich were to be honored . They refused to accept the award out of respect for Bach because he deserved the honor.

For his portrayal of Luke in the sitcom of the same name , Bach received the Telestar in 1996 , the German Comedy Award in 1999 and the Golden Camera in 2001 . In 1990 he was awarded the Cabaret Prize Barocke Sau vom Bodensee for his Edgar cabaret program . Apart from Bach, only the cabaret artist Günter Grünwald (1989) and the actor Ottfried Fischer (1991) have received this award . In the mid-1990s, Bach was awarded the Gilden Kölsch Culture Prize . On June 7, 2006 he was accepted into the "Signs of Fame" of the peace project Fernweh-Park, which unites people. In 2007 he received the German Comedy Award again, this time as a member of the Frei Schnauze XXL ensemble for the best comedy show.