Germering is a large district town in the southeastern district of Fürstenfeldbruck ( Upper Bavaria administrative district ) and is located west of Munich .

Germering is a city on the northwestern foothills of the Munich gravel plain . The city is on a relatively flat level and slopes slightly to the north. Germering also borders Puchheim in the north via agricultural fields . To the east of the city there is a wide strip of fields that is crossed by the A99 motorway ring. The free areas on the outskirts of Munich are currently being built with a new residential area ( Freiham ). In the south and south-east there is a larger forest area, the Kreuzlinger Forst and the A 96 motorway . In the northwest are the artificial Germeringer See ( quarry pond ) and the small, wooded Parsberg . In the west, the district of Starnberg joins the community of Gilching .

The municipality has seven officially named municipality parts (the type of settlement is given in brackets ):

Neugermering and Schusterhäusl are not officially named parts of the municipality.

As early as the late Neolithic and the early Bronze Age , barrows were dug in the area of ​​today's Obere Bahnhofstrasse at the corner of Steinbergstrasse. A Bronze Age cremation grave and settlement remains can be traced from the urn field culture . A villa rustica with hypocaust (warm air heating) dates from Roman times . The grave of a German woman was discovered near Augsburger Strasse, which could be identified from the grave goods. In addition, several Roman brick kilns were found, one of which can be visited on the road towards Alling. A stool grave was uncovered on Krautgartenweg.
see also Burgstall Parsberg

First mention of individual parts of the community

Early medieval row graves and pre-Romanesque church remains are under the old St. Martin Church. In 1422 Germering was destroyed during fighting in the area around the Battle of Alling . In 1448 the two communities were first mentioned as members of the Starnberg district court.

In the 1980s, an early medieval amulet was found during an excavation in today's Krippfeldstrasse. It later served as the inspiration for the modern city coat of arms.

In 1818 the communities Germering and Unterpfaffenhofen were formed with the community parts Kleßheim, Nebel, Streiflach and Wandlheim. In 1852 the two municipalities changed to the Royal District Office of Bruck as a tax district .

With the construction of the Pasing – Herrsching railway line in 1902, a fundamental structural change began. Harthaus and Neugermering emerged as new settlements. While a military tank farm was built in the Kreuzlinger Forst, the so-called WIFO settlement for the employees of the military facility was built in what is now the Unterpfaffenhofen part of the municipality . During the Second World War, a satellite camp of the Dachau concentration camp was located in Germering . After 1945, the population grew due to the admission of displaced persons and refugees. The result were the first social housing projects between 1952 and 1954. The rapid growth continued in the 1960s and 1970s - not least due to the designation of new building areas. From around 1978 the development stabilized and urban planning has since concentrated on infrastructural improvements. On May 1, 1978, the previously independent municipalities of Germering and Unterpfaffenhofen were united as part of the municipal reform . Until it was elevated to the status of a city on April 12, 1991, Germering was the largest municipality in Bavaria without city or market rights. After Munich , Ingolstadt , Rosenheim , Freising and Dachau , Germering became the sixth largest city in Upper Bavaria. On October 1, 2004 Germering was elevated to a major district town. The rapid development after the Second World War is reflected in Germering's inconsistent settlement structure. In addition to the village centers of the old Germering and Unterpfaffenhofen, there are the high-rise housing estates of the seventies (WWK housing estate) and the urban architecture of the new city center with the town hall.

On May 1, 1978, the previously independent community of Unterpfaffenhofen was merged with Germering to form one community. 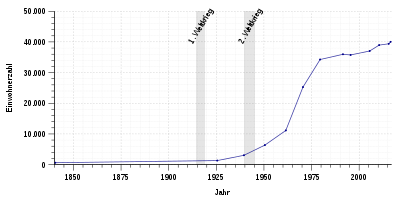 Population development of Germering from 1840 to 2016

Andreas Haas ( CSU ) has been the incumbent mayor of the large district town of Germering since 2008 . He was confirmed in office on March 15, 2020 with two competitors with 68.87% of the votes.

Former mayor of the Germering community

The Germeringer part of the coat of arms consists of the old village church of St. Martin (white on a red background), which was chosen because its shape differs significantly from other Upper Bavarian country churches. The Unterpfaffenhofen part is a red lion on a white background. It was taken from the coat of arms of those of Hufnagel and Chlingensperg , who in the 17th and 18th centuries a. a. with the Wandlheim estate, they owned larger property. The three mountain, which symbolizes the Parsberg, was used as a connecting element.

As part of a competition in 2002, the city of Germering received a new city trademark. The logo was designed by the GD90 office from Buchenbach near Freiburg. It represents a stylized decorative disk made of color segments, which stands for colorful diversity.

The disc is derived from an amulet from the 7th century AD, which was found during excavations in Germering. In the aerial photo, the rose window can also be seen as a large plaster picture on the market square in front of the city library.

Scheme of the most important traffic routes in Germeringen

Entrance building of the Germering-Unterpfaffenhofen station

Germering is located directly north of the A 96 Lindau –Munich.

In the east of the city is the A 99 motorway ring , which connects the A 96 with the A 8 and A 9 motorways, among others . The section between the A 96 Lindau – Munich and the A 8 Munich – Stuttgart has only been fully accessible since February 19, 2006. Germering can be reached via the motorway exits Gilching, Germering Süd (both A 96) and Freiham Mitte and Germering Nord (both A 99).

The A96 has been expanded to 6 lanes since mid-2017, which led to a permanent traffic jam. For reasons of noise protection, a one-sided gallery has also been built since 2018. There is also a new rest area southwest of Germering.

The B 2 led, coming from Munich, toward Fuerstenfeldbruck through the town. It was moved to the east of the city in the course of the motorway construction work ( bypass ) and got its own junction (Germering Nord).

Germering has been on the Pasing – Herrsching railway line since 1903 . Within the Germering area, there are two train stations: Germering-Unterpfaffenhofen station and Harthaus station, which opened in 1947 . Germering has been connected to the Munich S-Bahn network since 1972 . The S8 line runs from Herrsching to Munich Airport Terminal .

At the two S-Bahn stations there is a connection to the following MVV regional buses :

In addition, the night bus routes N80 and N81 serve in the Germering city area.

It has also long been considered to extend the existing underground lines U5 or U6, which still end in Pasing or Klinikum Großhadern, to Germering. But this will happen in the 2030s at the earliest, if at all. In 2019, the Germering SPD again proposed to build a cable car from Germering via Freiham to the Pasing train station, as this would significantly relieve the S-Bahn. It would also be cheaper than a subway, and the construction costs and time are very low. This is currently being checked.

Mainly medium-sized companies from the metal processing and chemical industries are based in Germering. There are also numerous smaller companies in the service sector. The largest local employer is CeWe Color . Other companies are DocuWare and ALLNET , whose new headquarters are still under construction and at 47 meters is one meter higher than Germering's tallest building to date, the yellow WWK high-rise. Numerous entrepreneurs are organized in the Germering trade association.

In the nationwide index of local comparative rents, Germering ranks seventh in 2018 with an index value of 137 and is thus well ahead of large cities such as Cologne (12th), Hamburg (13th) and Frankfurt am Main (18th place). The city of Germering publishes an official rent index ; Since 2015, there has also been a rental price brake of 10% above the local comparable rent .

There are four primary schools in Germering: the church school and the Kleinfeld school, the Wittelsbach school and the Kerschenstein school are both elementary and middle school. There are also the state secondary school Unterpfaffenhofen as well as the Max-Born-Gymnasium and the Carl-Spitzweg-Gymnasium . In addition, the Eugen-Papst-Schule exists as a special educational support center . The Germering State Technical College has existed since 2017.

The cultural center is the city hall with its cultural facilities such as the city library, event and exhibition rooms and restaurants. The “red thread”, a red line with abstract symbols and information that leads through the town in a star shape, caused a national sensation. It is worth mentioning the musical subculture in the Cordobar, in which sports fans Stiller and Jamaram often played and / or rehearsed in their early days and which especially promotes young, unknown bands from the area. The Germeringer outdoor pool is known as a popular place to stay on hot summer days. It was also used as the location for the first video clip by Sportfreunde Stiller for their song “Surfing”.

The Zeit + Raum city ​​museum , which currently houses special exhibitions, is located at Domonter Straße 2 (former fire station behind the town hall) . There are also several showcases that present ancient finds directly at their place of discovery:

Promoter and beneficiary of National Socialism

Districts of the municipality of Germering

Municipalities in the Fürstenfeldbruck district