Mintraching is a municipality in the Upper Palatinate district of Regensburg in Bavaria .

Mintraching is located about 17 km southeast of Regensburg .

Bordering Mintraching (clockwise from the north): 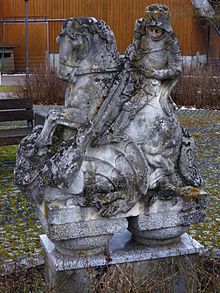 Figure of St. Georg on the town hall square in Mintraching

The place Mintraching was first mentioned as Muntrihhinga in 768 . However, traces of settlement of the oldest farming culture in Central Europe have also been discovered here. Traces of a Roman villa rustica have been found near the Herzogmühle . It was settled by the Bavarians (the ending -ing means that Germanic tribes permanently settled there). According to documents from 1148, the place belonged to the Niederaltaich monastery at that time . The monastery remained an important landlord in the place until the secularization in 1803.

The station Mangolding lies at the Regensburg-Passau railway . It is purely a depot : the trains do not stop to get on and off.

Districts of the municipality of Mintraching

Municipalities in the district of Regensburg