The Zeppelinallee in Frankfurt am Main is an avenue in the districts of Frankfurt-Bockenheim and Westend. At the beginning - up to the confluence with Ludolfusstraße - it is part of the avenue ring and the district boundary . It includes a large number of listed houses, mostly in the neoclassical style and has a park-like median strip from the middle.

The street was built in 1901 to open up the “Ginnheimer Höhe” development area. The garden architect Max Bromme designed the park-like street. The wide green area that divides and shapes the street is still used today as a park and children's playground.

The street is named after Ferdinand Graf von Zeppelin (1838–1917). The airships constructed by him had their first landing site in Frankfurt, Frankfurt-Rebstock Airport .

The Senckenberganlage ends at the intersection of Bockenheimer Landstrasse and the Zeppelinallee begins . There the street is part of the Alleenring and separates the districts of Bockenheim and Frankfurt-Westend . On the left side of Bockenheim is the Johann Christian Senckenberg University Library , which forms the corner building on Zeppelinallee. On the right side of the west end, the Westarkade high-rise building ( KfW headquarters ) opens up Zeppelinallee. In the years up to 2010, the high-rise was built on the site where the German library's high-level store was previously . To the north of the western arcade is the area of ​​the Frankfurt Palmengarten .

Villa Leonhardi is located in the palm garden and clearly visible from the Zeppelinallee . It was built in 1806 as a garden villa for the von Leonhardi family . The architect was Nicolas Alexandre Salins de Montfort . From 1842 the building belonged to the Erlanger banker. In 1905 the building was demolished. The front of the central pavilion with the sandstone pillared hall was rebuilt in 1912 as an entrance gate in the new building of the tennis club house in the palm garden. In 1987 the city of Frankfurt decided to rebuild the historic building. The building contains two ballrooms and is used as a café.

A side lane runs between Sophienstrasse and Ludolfusstrasse, separated by a green strip with old chestnut trees. It can only be driven in north-south direction and is intended as a driveway and parking space for residents. There, opposite the Villa Leonhardi, there are neoclassical villas that are often used as consulates . The row of villas begins with the Portuguese consulate at Zeppelinallee 15, at the corner of Sophienstrasse. It is directly followed by the Turkish Consulate General at Zeppelinallee 17. The complex, consisting of a neoclassical villa from 1912 at number 12 and the actual consulate, Zeppelinallee 17/19, a neoclassical semi-detached house from 1911, which is a listed building. The representative villa was built in 1911 according to a design by the architect Christoph Gesser and features rich plastic stucco ornamentation.

The semi-detached house Zeppelinallee 21/23 is a listed villa from 1911 based on a design by the city architect Joseph Ernst Richter . The house has a neoclassical decorative facade and a centering porch between elaborate balcony grilles. At house numbers 25 and 27 there are two neoclassical villas from 1913. Architect Johann Peter Walluf created a symmetrical, richly ornamented plaster / sandstone facade behind an ornamental grille between elaborately carved posts.

Zeppelinallee 29–31 is a listed neoclassical double villa from 1913 based on a design by A. Hermann appointed . The appearance of the house is characterized by the stone facade with ashlar facing. The flat sloping mansard roof is no longer in its original condition. The neoclassical villa from 1911 at house number 33 is characterized by a rich stone facade and an ornamental fence between stone posts.

The French Consulate General (Zeppelinallee 35) is also a listed building. It is the left half of the three-story villa at number 35/37. The villa has a neoclassical facade and the original fencing.

The semi-detached house with the house number 39/41 is a representative, listed villa from 1910. With the neoclassical symmetrical facade made of stone blocks, the rich decoration in the window area and the lavishly profiled and ornamented roof cornice, the house even stands out in the vicinity of the villas on Zeppelinallee . 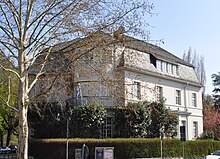 The house Zeppelinallee 43 has been the Consulate General of Greece since 1995 . The building on the corner of Ludolfusstrasse was designed by Julius Lönholdt . Despite its unusual tower-like porch, it is a very strict late-classicist design. Ultimately, the style of the building and the importance of classicism to Greece were the main reasons for purchasing it as a consulate.

The Villa Sonneck (Zeppelinallee 38) is a listed neoclassical villa. The villa was built for Heinrich Irenaeus Quincke , a famous internist and surgeon at the time. He commissioned the well-known Hermann Muthesius as the architect , who built this two-story villa from 1907 to 1910 in the English country house style. It was privately owned until 1975, when the villa was acquired by IKB Deutsche Industriebank , which had the house renovated in eleven months and converted to meet their requirements, including the installation of a large underground car park. In 2004 the villa was sold to a private investor who, from 2004 to 2007, had the property restored to its original purpose as a residential house at a cost.

Behind Ludolfusstraße, the Alleenring branches off from the Zeppelinallee with Miquelallee . The street is now separated by the wide green strip and built on with residential buildings, many of which are representative.

Zeppelinallee 44 is a neoclassical villa from 1912. A structured stone front, profiled and ornamented door walls at the entrance and coffered parapet fields characterize the appearance. Just like the house, the original enclosure is also a listed building.

At number 47 there is a representative villa, which was built in 1910 based on a design by Bruno Paul . Here, too, there is a neoclassical stone facade and the original enclosure.

The corner house at Zeppelinallee 65–67 was built in 1922–25 as a representative neoclassical villa. The listed house with a rectangular floor plan, symmetrical plastered facade and double-sided wing structures under a high mansard roof has high windows between folding shutters on the side wings, e.g. Sometimes as doors behind ornamental barred balconies and the original entrance portico.

The last two listed buildings in the middle area are house numbers 69 and 77. Under house number 69 there is a two-storey neoclassical villa from 1910 with a high mansard roof and a gabled risalit with historicizing decorative shapes. The house number 77 is a neoclassical villa from 1912. The architect A. Engelhardt designed a symmetrical plastered sandstone facade. Until the move to the Otto-Fleck-Schneise, this building served as the headquarters of the German Football Association .

Beyond the intersection with Franz-Rücker-Allee, Zeppelinallee forms a loop that is designed as a one-way street. At the far end there is an open space (the Margarete and Fritz Kahl facility ), which allows a view over the Ginnheimer Landstrasse to the Niddapark and the sports university. The last two listed neoclassical villas with the house numbers 105 and 107 are located here. Both were built between 1921 and 1923 according to designs by Wilhelm Derlam . House number 105 is characterized by a symmetrical facade characterized by garlands. The building is now the residence of the US Consul General.

At the end of Zeppelinallee with house number 99-103, the Frauenfriedenskirche was built from 1927 to 1929 by Hans Herkommer . It was created on the initiative of Hedwig Dransfeld , the chairman of the Catholic German Women's Association . Its construction was financed from donations. The monumental, architecturally significant and artistically richly decorated church is a place of remembrance of the victims of wars and of prayer for peace. The cubic structure with a monumental front tower with a large picture of Our Lady is striking. Inside there is a crypt in which there is a Pietà by Ruth Schaumann .