The Harz district is a district in Saxony-Anhalt that was created in the course of the second district reform on July 1, 2007 from the Halberstadt , Wernigerode and Quedlinburg districts and the city of Falkenstein / Harz ( Aschersleben-Staßfurt district ).

The district is located in the west of Saxony-Anhalt and extends from the high Harz region around the Brocken over the north-eastern parts of the Harz Mountains to the northern Harz foreland with the Huy and Fallstein ridges .

The triangle with the states of Lower Saxony and Thuringia borders the town of Benneckenstein (Harz) in the town of Oberharz am Brocken . The Brocken as the highest point of both the district and the state belongs to the city of Wernigerode .

The southern route of the Romanesque Road leads through the district. Well-known sights of the Harz such as the Brocken , the Hexentanzplatz , the Roßtrappe , the Baumannshöhle , the Hermannshöhle and the Rappbode-Talsperre are located on the territory of the district.

The Benrath line and thus the transition from the High German - or more precisely: the East Central German dialects to the Low German language - runs right through the district to the north of Ballenstedt and Benneckenstein .

The following overview shows the population development of the Harz district (population 1990 from October 3rd, from 1991 December 31st of each year).

On September 23, 2008, the district received the title “ Place of Diversity ” awarded by the federal government .

The result of the district assembly election 2019 shown on the right resulted in the following distribution of seats:

District building in Quedlinburg , today, among other things, the seat of Department IV (building and environmental management)

(according to the official final result of the district council election in the Harz district on July 5, 2019; voter turnout: 31.1%)

The coat of arms was approved on January 3, 2008 by the Ministry of the Interior of Saxony-Anhalt.

The coats of arms of the administrative communities, cities and municipalities of the district can be found in the list of coats of arms in the Harz district .

Against the name "Harz region" there were objections from the Lower Saxony part of the resin because the county only a fraction of the over three countries extending low mountain range is to be allocated and the greater part of the district as well as the administrative headquarters are outside of the resin.

In the future atlas 2019 , the Harz district was ranked 369 out of 401 districts and independent cities in Germany, making it one of the regions with "high future risks".

The most important connection road is the A 36 , which crosses the district in a west-east direction and represents a connection to the greater Braunschweig and Halle (Saale) areas . While the former district towns of Wernigerode and Quedlinburg are directly connected, Halberstadt is connected to the expressway via the B 79 with the Quedlinburg-Zentrum exit.

There are hourly regional express connections to the state capital ( Magdeburg – Thale railway ) and the largest city in Saxony-Anhalt ( Halle – Goslar railway ) via the Halberstadt railway junction . Other routes are the Rübelandbahn (Blankenburg – Elbingerode, sometimes only goods traffic) and the Halberstadt – Blankenburg railway line . Friday to Sunday there is a direct connection from Thale / Wernigerode via Halberstadt to Berlin. The network is served by Abellio Rail Mitteldeutschland for passenger traffic and by Havelländische Eisenbahn for freight traffic. The closest connections to the long-distance network are in Magdeburg, Halle (Saale), Braunschweig and Hanover.

In addition, there is a meter-gauge connection into the Harz with the network of the Harzer Schmalspurbahnen ( HSB ). There are transfer options from HSB to the DB AG network in Wernigerode and Quedlinburg . End stations in the Harz district are: Quedlinburg, Harzgerode, Hasselfelde, Eisfelder Talmühle , Drei Annen Hohne , Wernigerode and the Brocken .

In road passenger transport (public road transport) are Harzer Verkehrsbetriebe ( HVB ) on the road. There is city ​​traffic in the cities of Ballenstedt , Blankenburg , Halberstadt , Quedlinburg , Thale and Wernigerode .

The city of Halberstadt has had a tram network for over 125 years .

There is a commercial airfield in Ballenstedt in the Harz district .

The next international airports are in Leipzig-Halle and Hanover . 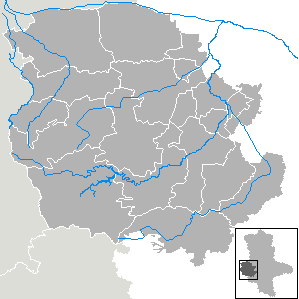 Unified municipalities
(cities arehighlighted in bold )
(* seat of the district)

Changes at the community level

There are 39 designated nature reserves in the district (as of February 2017).

See also : List of nature reserves in the Harz district

On October 1, 2007, the district was assigned the distinctive sign HZ .

Since November 29, 2012, the distinguishing marks HBS (Halberstadt), QLB (Quedlinburg) and WR (Wernigerode) have also been available.

Counties and independent cities in Saxony-Anhalt